Carrying concealed can be challenging at some times. Not all clothing is conducive for hiding clothing and in some states, allowing the shape of a gun to “print through” your clothing is illegal, even if you do have a concealed carry permit. Besides that, a visible gun can give away your tactical advantage, letting the bad guys know you’re carrying.

There are two basic ways of dealing with this problem. One is to wear baggy clothing which hides the outline of a gun and the other is to carry a smaller gun. While the first option is often more favorable, there are some conditions where it isn’t practical. Wearing a suit coat to conceal a pistol is difficult when it’s 100°F outside and women’s clothing, which usually fits snugly, doesn’t leave a whole lot of room to hide much of anything, let alone the bulk of a gun.

That’s why some people turn to carrying a pocket carry handgun, a gun that’s small enough to hide in a pocket. I carried one of these for a number of years, when I first started carrying. I upgraded to something larger a number of years ago, but still have that gun. I carry it at times when carrying my normal carry gun is impossible due to the clothing I am wearing.

Before buying any pocket gun, you need to understand what these guns really are. Most are smaller caliber firearms, and they all have short barrels. In other words, they clearly qualify under the old term of being “snub nose” even if they aren’t revolvers.

There’s a great line from one of W.E.B. Griffin’s books, where an experienced cop is giving advice to a rookie. After telling him to go to the shooting range with his snub nose some day, so he could see how hard it was to hit anything with it, he said, “if you can’t hit them in the head, throwing it, you can’t hit them shooting it either.” That’s a key truth that must be kept in mind when using any pocket gun.

In other words, this isn’t the gun you’re going to use to shoot someone 30 feet across a restaurant. You’re better off grabbing your Glock for that. Rather, pocket guns are “belly guns,” meaning that they’re most effective when you’re belly to belly with your adversary. Rather than aimed fire, they’re the guns used when you’re shooting instinctively, probably with the gun held at waist level; possibly even with the muzzle in contact with his belly.

Nor are you going to use this gun for a true shootout. About the only way you could use it in that case is for suppressive fire. That’s probably not something you want to do, as those poorly aimed shots can still hit someone, even if it isn’t the right person.

Finally, expect a lot more kick out of a pocket gun, than you’ll receive from a larger pistol. The small size and light weight make the recoil much worse than heftier handguns. If you don’t have a good grip on it, there’s a chance that it will come out of your hand; not something you want to have happen in the range, let alone when you have to use the gun.

With that said, here are my picks for the best. 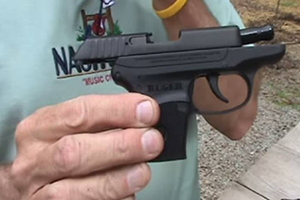 I had to start the list with the Ruger LCP only because it’s the pocket pistol I own. Nevertheless, it’s not just that I own one; the LCP is probably the most popular pocket pistol on the market.

It is also one of the smallest and lightest pistols around, important considerations for a pocket pistol.

While the .380 ACP isn’t an ideal caliber for a self-defense round, it’s effective at short range.

The newer LCP II eliminates the one real complaint that I had against this pistol, by improving on the sights. The original sights were hardly more than an indentation in the back of the slide, with a slight protrusion in the front. On the LCP II the sights are fully adjustable. Yet at the same time, the sights aren’t high enough to catch on anything while pulling it out of your pocket. 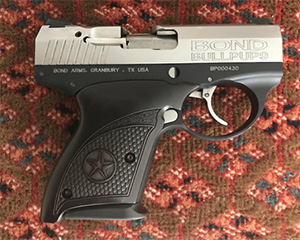 If I were in the market for a replacement for by LCP, I’d take a close look at Bond Arms’ BullPup9, overlooking its price. This is one of the few bullpup pistols on the market.

While that may not seem like much of a difference, it is when you compare the overall length and barrel length of this pistol to the others on this list.

It is actually a touch shorter than the LCP, while having a barrel that’s 0.6 inches longer.

The other nice thing about this pistol, besides its looks, is that it is a 9mm, giving it a whole lot more penetrating power than its .380 ACP cousins on this list. Even with that, they’ve managed to increase the magazine capacity, giving it 7 in the magazine and one in the throat. 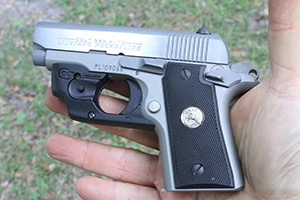 The Colt 380 Mustang is reaching a point where it’s marginal as a pocket pistol at 5.5 inches. Nevertheless, I still consider it one of the best pocket pistols around.

For 1911 enthusiasts, this compact little pistol provides the same basic design, making it extremely easy to make that switchover. I found it extremely easy to use, probably because I learned to shoot in the Army, back when the 1911 was the sidearm of our nation’s military.

This scaled-down version of the venerable 1911 comes with a polymer frame, cutting down the weight, which is important for a pocket pistol. However, this isn’t a .45 caliber, like the 1911. But I won’t hold it against it. For a pocket pistol, .380 ACP is an acceptable choice. 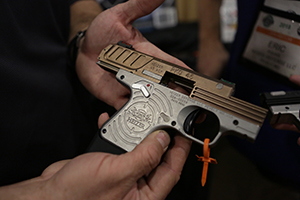 I had to include the Heizer Defense PKO-45 on the list, because it is a .45. Being a .45 fan, as far as I’m concerned, there isn’t a better self-defense round on the market.

It was developed as the standard Army sidearm round, when they were dealing with Moro tribesman attacking them while hopped up on drugs.

I’ve always figured that if I was going to be attacked by a criminal, there was a good chance of them being on drugs, so I carry a .45.

But this is a very unique .45, the only one small enough to be called a pocket pistol. At 5 inches long, it’s the shortest pistol on our list. It also has a unique design, where the guide rod is above the barrel, allowing the barrel to remain fixed. The company claims that this makes for less recoil and I wonder if it would make the pistol more accurate as well. It’s a lot heavier than the other pistols on our list, which should help with the recoil; but it’s a .45, so that should be expected. 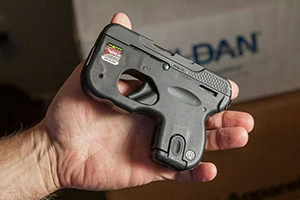 When the folks at Taurus designed this pistol, they threw out the rule book and tried to think of what a pocket pistol needed to be.

The most distinctive aspect of this pistol is its shape, which is curved. Most shooters need some time to get used to it. But that smooth, almost aerodynamic shape makes it very easy to draw and holster the pistol, probably the biggest problem for users of any pocket pistol. It is actually curved to fit your body and has a clip to attach it to your pocket, waistband or belt. This makes the curve one of the most concealable firearms around.

I complained earlier about the sights on my LCP; well, this one doesn’t have any iron sights at all. What it does have is a line engraved and painted white on the back of the slide to help you aim, should you need it. But the real gunsight is a laser sight and tactical light, both built into the front of the gun. for the close range instinctive shooting its designed for, that’s a whole lot better.

A pocket gun is a worthy addition to anyone’s collection. While they probably won’t become the main gun in anyone’s closet, there are times when having one can be convenient. Not only can they be concealed where other guns can’t; but any of them make a good backup piece, for those times when you might feel the situation warrants it.