Canning Meatloaf for Meals in a Jar

Canning Meatloaf for Meals in a Jar

I love having meals in a jar on my storage shelves.  It is so nice to spend a few minutes warming up a good hearty meal, instead of spending hours preparing one.

I have been searching for a recipe for canning meatloaf. I found several on the web but I was not comfortable with making the mix, putting it raw in a pint jar and then processing it in a pressure canner.

If you are like me when you make a meatloaf in a loaf pan for dinner, it is usually swimming in fat when you take it from the oven. I did not want to look at jars of fat accumulation and I believe a high fat content will make processed food go rancid faster than not, so I decided to come up with my own recipe.

Here’s what I did: I made my own mixture (recipe follows). Since I found a great deal on ground beef this week, I decided to use 10 pounds of meat and see how many meatloaf meals in a jar I could make. But in case any of you would like to do smaller portions, here is the recipe broken down for every 2 pounds of meat.  You’ll have to guess at the tomato juice, if you don’t make a bunch like I did.

In addition to the above items, you will need tomato juice to cover your meat in the jars.  I used 10 pounds of ground beef, so I ended up needing 3 cans that were 1 quart 14 ounces each.  I used the Great Value brand from Walmart not only because it was cheaper, but because it was 100% juice and I could pronounce all the ingredients: tomatoes, salt and ascorbic acid.

I began by cracking my eggs in a very large mixing bowl and lightly whisking them with the garlic powder, salt, and black pepper.  I then added the onions, bell peppers and oatmeal and stirred this mixture.  Then I began working the 10 pounds of meat into this mixture using my hands.

I actually ended up using two large mixing bowls until I got everything mixed together and looking uniform.  I then made meatloaf patties.  Yes, patties like you would make hamburgers for the grill.  Speaking of grill, just wait until I tell you later what else I did with my cheap ground beef.

Since you will be canning in wide mouth canning jars, take a wide mouth lid and a band and stuff your meat mixture into it.  Don’t over-stuff it like I did in this picture, or you will only get four large patties in your canning jar, instead of the more uniform five. Just make it even with the band. 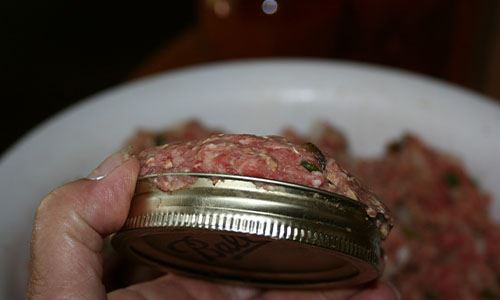 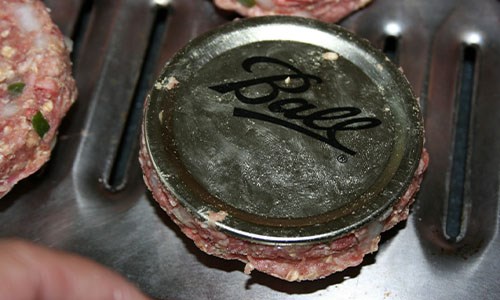 and there you go! You have an exact size portion of meat, that after cooking and shrinking just a bit, will fit perfect in your wide-mouth jar. 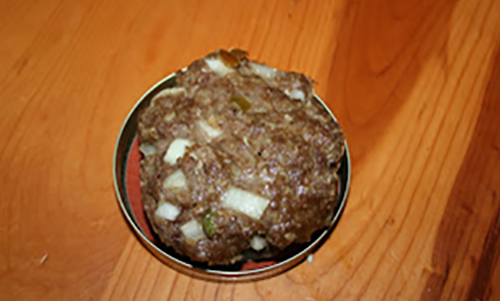 After forming my meatloaf patties, I put them on my broiling pan to bake. This way most of the fat drains as it cooks. My pan held 12 patties at a time. 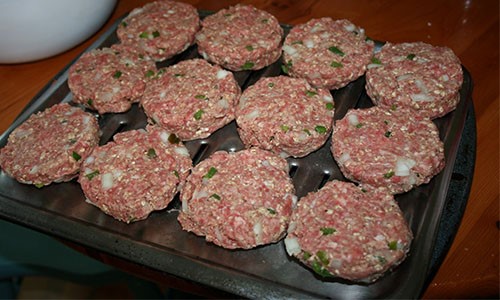 I baked these in a 375 degree, preheated oven for 30 minutes. I sacrificed one to see if it was done enough.  The onions were just a little crunchy, but the processing would take care of that. 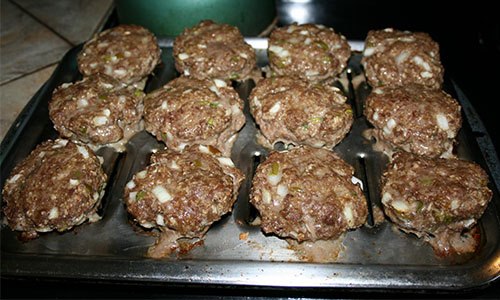 As each pan was done, I put the patties on a platter, covered them with tin foil and placed them in the refrigerator until I had enough to do a canner load.  My canner will do 7 quarts.

I had already washed my jars in the dishwasher so they were still hot.  I had my lids and bands simmering. I  had my tomato juice just at a simmer on medium heat, making sure I stirred often to prevent scorching. 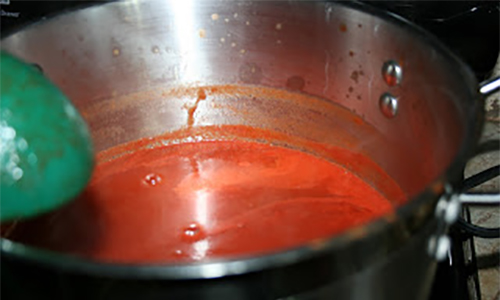 I had my pressure canner ready with simmering water.  Since it took me a couple of hours to bake all of the meatloaf patties, some were now just barely luke warm. Five patties will fit into a quart jar just under the 1 inch mark. 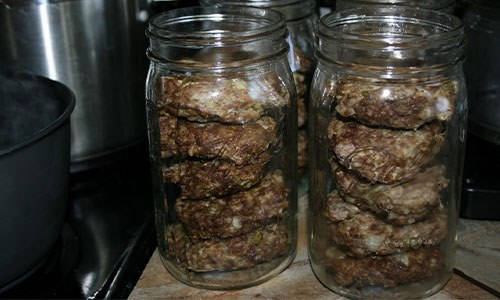 To warm them back up, I placed the jar with meat into the microwave and microwaved on high for a minute or so. I then ladled my hot tomato juice over the meat patties, covering the patties. I used a wooden skewer to run down the edges of the jar to release any air bubbles. 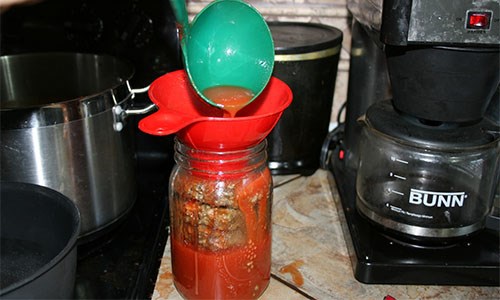 If you are canning anything with meat or oil, use a paper towel soaked in white vinegar to wipe your rims.  This cleans any oil you may have missed, which may prevent a good seal on your jar. 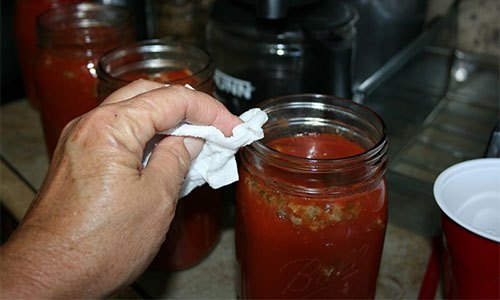 I removed the lids and bands from the simmering water and hand tightened each jar, before adding them all to the canner. 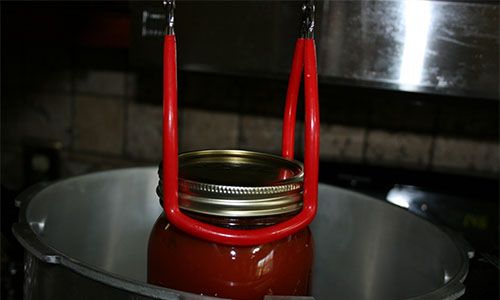 After loading the canner and getting my pressure up to 11 (I have a dial gauge),  I processed my quarts for 90 minutes. If you try this recipe and use pint jars, you will need to process only for 75 minutes.

Although I was at the inch mark on my jars, I still had some spill over from my jars. The water in the canner had a light shading of red from the tomato juice and my tomato juice had went down in the jars. However this did not prevent my jars from sealing, so they are OK.

After processing I still see a bit of fat that collected at the top, but not so much that I can’t live with it.  I have 3 more jars to process and I think I will cut back on the tomato juice and see if the processing needed more room to create juices in the jar.

I used my own onions and bell peppers grown this year in the garden and already had the spices and oatmeal on hand, so I don’t know the exact cost of these meals. The meat and the tomato juice this week cost around $20.00 and I will get 10 quart jars, so for me this breaks down to around $2.00 a meal.  Can’t beat that.

Each jar would feed a family of  3 to 4 easily, unless you have really big eaters. I think this would be good served with mashed potatoes, or it would probably be great over some rice.  Some people like a sweet glaze over their meatloaf and for those that do, after opening a jar for warming,  you could add a little brown sugar to the tomato juice and serve over the patties.

PS: I processed the remaining jars the next day using a little less tomato juice. I still had liquid that run over during processing. I am thinking that maybe there is a lot of trapped air when I put all the patties in at once and then pour the tomato juice over everything.

For my next batch, I will make sure to add one patty at a time and pour the juice over each patty individually. There has got to be a reason this is not working as planned.  In spite of juice and some the fat content spilling over, all of the jars have a good seal.

Note:  I know the food police does not recommend canning anything with eggs or oatmeal, but the Amish have been doing this for years and sometimes not even with a pressure canner. I never heard reports of them dropping dead with food poison on a daily basis.  Just remember to do what you are comfortable with.