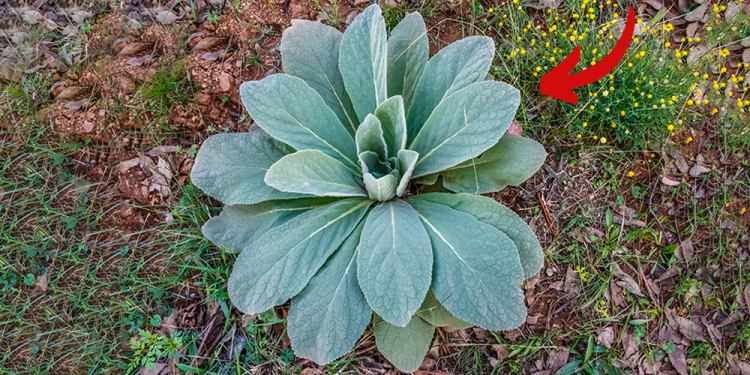 So many plants we are taught to think of as weeds are actually super helpful. One way we can prepare for when the SHTF is to learn as much about those beneficial weeds as we can.

A great example of this is mullein. Considered a weed by most people, mullein has many medicinal and survival uses.

So if you find mullein growing in your backyard, don’t step on it- harvest it!

Mullein, Verbascum thapsus, grows in well-lit, disturbed soil but will grow in compacted soil as well. Like many weeds, it doesn’t need good soil to thrive.

It is a biennial plant, so it doesn’t flower until its second year. So keep that in mind when you are looking to harvest mullein. 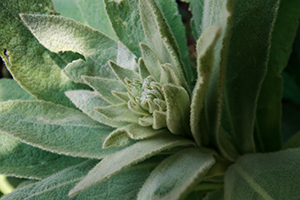 An easy way to identify mullein is by its leaves.

In the first year, the leaves will grow in a rosette pattern. They are oval and grayish-green colored.

But the most distinctive feature is the tiny hairs that give the leaves a velvety feel.

The leaves earned the plant one of its common names- cowboy toilet paper.

Mullein doesn’t produce flowers until the second year. When it does, you will see a single stalk growing from the center of the leaves. 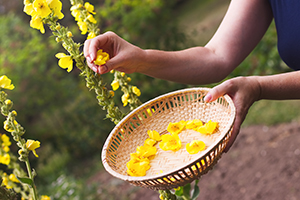 This stalk can reach eight feet tall, and many yellow flowers appear on it in summer. Each flower only opens for a short period of time for one day. They usually begin flowering in June and continue to bloom until August. The flowers on the bottom of the stem will open first, and then it progresses up the stem.

You can harvest the leaves year-round.

These can be dried in the sun or a dehydrator and stored for later use. There are many uses for dried mullein leaves. In addition to teas and other medicinal uses, the leaves have a host of survival uses we will discuss later. So, keep reading. 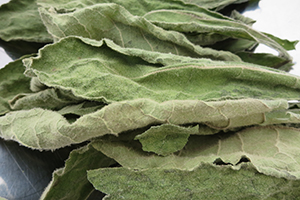 It’s best to gather the flowers mid-morning after the dew has dried. You should dehydrate your flowers immediately after picking them. You can do this is a commercial dehydrator or in your oven at a low temperature. Once the flowers are dry, store them in an air-tight glass jar.

The flowers are susceptible to moisture, so you may want to add a silica gel packet to your jar to preserve their freshness.

Make sure if you are harvesting in the wild, you do so in an area that is free from chemicals and herbicides.

Mullein has been used in traditional medicine for thousands of years.

Mullein is anti-inflammatory, anti-bacterial, and contains compounds that can have antioxidant properties. The leaves and flowers are used to treat a variety of different conditions. 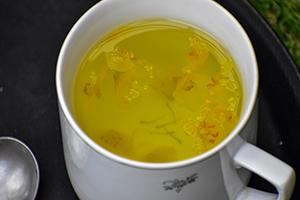 Steep one teaspoon of mullein leaves in a cup of boiling water. Allow the tea to cool before you drink it. You can drink 1-2 cups per day. You should consume it slowly, one tablespoon at a time.

Mullein tea can be used to treat a variety of conditions. It is, of course, great for respiratory problems, but it also a mild sedative and a diuretic.

It is commonly used to treat respiratory conditions. Mullein contains a high concentration of mucilage which makes it effective in treating asthma and other respiratory complaints.

Traditionally, the dry leaves were smoked to provide immediate relief of asthma symptoms.

However, you can make a tea or a tincture that is effective for rapid relief, as well.

Mullein is also used to treat earaches. Studies have shown that it is effective at relieving the pain associated with ear infections. 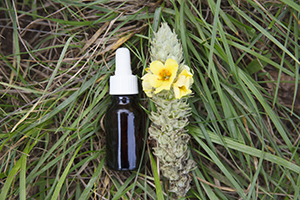 In this case, mullein oil is used rather than tea.

Mullein oil can either be purchased or made easily at home. You just need a few drops of warm oil.

Drop them into the ear canal and then gently massage outside of the ear.

You can repeat this every thirty minutes to help with the pain.

Mullein oil can also help with skin conditions such as eczema.

Related: How To Make Oil From Plants At Home

Mullein can be used for more than just medicine. If you look at all the common names for mullein, you can begin to get an idea of some of its uses. 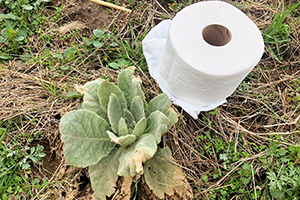 One common name is cowboy toilet paper. And mullein can be used for exactly that. The soft velvety leaves are a great choice when you are caught unprepared with your pants down.

Stock up on the plant in summer and dry the leaves for toilet paper to use in the winter months.

While you won’t find the leaves quite so soft once they are dry, you will be surprised by how absorbent they can be. Once you try it, you may never want to go back to store-bought TP. Mullein can be very soothing to the skin, and the Cherokee made a poultice to treat hemorrhoids.

Some people do find mullein can irritate their skin, so make sure you do a spot test before rubbing it on your sensitive places!

As long you aren’t sensitive, the leaves can also be used as bandages. The Cherokees used the leaves to treat prickly rash in the armpits. And other topical uses include leaf poultices for bruises and rheumatic pains. 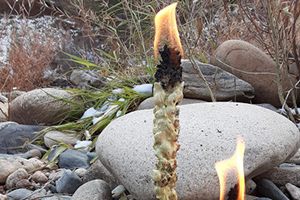 Names like “hig candlewick” refer to its fire-related uses.

The central stalk in the center can be used a torch. Simply dip it into so fat that it will help it burn longer.

You can also use mullein to start fires with the bow or hand drill method.

Use the dry leaves and seeds pods as tinders as they also burn well. In fact, many cultures in the past used dried mullein leaves as wicks.

Those leaves are useful in other ways as well. In the past, they were used to cushion and insulate shoes in the winter.

And we have one last use for mullein. It has certain saponifying compounds that make it toxic to fish. In the past, people have added mullein to a pond to aid fishing.

As you can see, mullein has a wide range of uses, both medicinal and survival.

Now that you know what to look for, mullein should be easy to recognize. Look for the velvety leaves growing in a rosette pattern.

You won’t see the yellow flowers until the second year.

Now you know to harvest this beneficial plant- so watch where you are walking! 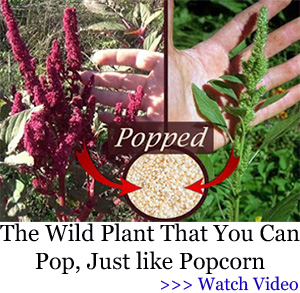 How to Store Your Drugs for an Extended Shelf Life