Preparing to survive in a post-SHTF world is challenging. More than anything, we have to realize that we’re preparing blind. We don’t know what sort of disaster we’re facing or what the post-disaster world is going to look like. With those two pieces of information missing, it’s hard to know exactly how people will react and what they will do. Therefore, we must prepare for the worst.

There is a wide-ranging assumption that public servants will abandon their posts. I would have to say that this assumption is totally unfair. We live in a hurricane zone and my wife is a city employee. She and her co-workers are required to agree that they will stay on the job, protecting the citizens of the city and keeping city services running, both during and after a hurricane. While a few might abandon their posts if things get bad enough, most seem to be people who will follow through on that requirement.

But what about a worst-case scenario? What about in the wake of an EMP or other grid-destroying event, which would result in a true breakdown of society and the banking system; a situation where they would no longer be paid to do their jobs?

That’s a difficult question. For some, like my wife, their positions probably wouldn’t exist anymore. But the real issue here is emergency workers and law enforcement officers. We would greatly need their services in the wake of such a serious disaster. Would they stay on the job or would they feel they had to abandon their posts to care for their families?

There’s really no way of knowing the answer to that question until the time comes. It is a very individual question, so I imagine that some will stay, while others leave. Whether they stay or leave will largely determine whether they are friend or foe.

Related: 50 High Value Items To Stockpile For When SHTF

The Cops Who Stay on the Job

Police officers tend to be highly disciplined individuals, much like soldiers. In fact, many start out as soldiers, then move to law enforcement when they get out of the military. As such, they are largely people with a high regard for the law. Oh, there are the few bad apples; but despite stories saying otherwise, there aren’t many of them.

Those who stay on the job will be concerned with maintaining law and order in the worst of circumstances. They will also be subject to the politicians who are still in place over them. This means that if those politicians declare martial law, they will most likely enforce martial law, unless they believe that to be an unlawful order.

This could get sticky. As we saw during Hurricane Katrina, declaring martial law would probably mean they would be confiscating guns as well. That would put the police in the position of appearing to be the enemy in the eyes of any Second Amendment supporter. Whether or not they actually became an enemy would depend on how you, I and other gun owners would react to them. If we use force to reject their orders to turn over our guns, they will use force in response. That makes them our de-facto enemies.

Related: 25 Things We Did as Kids That Would Get Someone Arrested Today

The Cops Who Abandon their Posts

Some police officers may choose to abandon their posts, especially if they feel that their families are in danger. In that case, the question is what they will do to protect and care for their families. While there are very few bad cops out there, there is always the possibility that a cop will turn bad in such circumstances, out of desperation to take care of their families.

These people will be dangerous, because they will be able to present themselves to the public as law-enforcement officers, when in fact they are acting like criminals. There could even be some cases in smaller communities, where the police take over, much as warlords take over in times of anarchy. Should that happen, the police in question would be extremely dangerous.

If military forces are called out to help gain control, it will be the National Guard, not the active military. US law prohibits the use of US military forces within the borders of the United States. Even if politicians in high places wanted to use the regular Army, it is doubtful that Army officers, all of whom know that prohibition in the law, would allow it.

But state Governors can call out the National Guard to help law enforcement in maintaining law and order. It’s not unusual for this to happen in the case of natural disasters. I would say that we should expect it to happen in a true SHTF scenario.

National Guard forces are US Army reserve soldiers and formations, which are “owned” by the governors of the several states. They serve a dual role, both as state owned military forces and reserves for the federal forces. If called out in a disaster situation, they could serve either to support law-enforcement or to provide disaster relief. In either case, they would be armed.

Should martial law be declared, it is highly likely that the National Guard would be called out. If guns are confiscated, they are the ones who would most likely do the confiscation. They would probably be as polite as possible about it; but if they decided to obey that order, they would do their best to fulfill it.

However, the National Guard, like other military forces, is made up of predominantly conservatives. There’s a very good chance that they would refuse an order to disarm the population. Military officers swear an oath to uphold the Constitution and they would likely see the disarm order as a clear violation of the Second Amendment. As such, it would be their duty to refuse that order.

Of all these options, UN troops is the most dangerous. Any decision to use UN troops would have to be made at the federal government level. Were such a decision to be made, the troops which would be brought in to help maintain civil order would not be American troops. They would be unfamiliar with our culture (other than what they had seen in movies) and unfamiliar with our laws.

To these troops, a firearm confiscation order would seem perfectly reasonable, especially when you consider that they would probably come from a country where they don’t enjoy our Second Amendment protections. There would be no appeal to them on the grounds of our Constitution.

Should this happen, refusing an order to turn over your guns would be dangerous. The only thing that would protect any of us is the fact that there is no federal gun registration. Even so, there are states which require a permit to own guns, as well as concealed carry licenses which many of us have. That would give them a starting point for where to look.

Getting into a battle with armed troops is foolish. In such a situation, the only practical recourse is to hide all your guns where they won’t be able to find them, with the exception of a few, which you could then allow them to confiscate, making them think you’ve obeyed the order.

Regardless of the specific situation we would end up encountering, chances are that any police or military forces which were still in operation, would be there as part of whatever government managed to survive. Unless such forces decide to go rogue, we can count on them being there to help.

That doesn’t mean they’ll be our friends though. Unless you know them personally, they will look on you with suspicion, just like they will everyone else. Anyone carrying a weapon openly will be suspect. That doesn’t mean that they’ll hassle you, take away your weapons, fire upon you or arrest you; it just means that they will be watching to make sure that you aren’t a problem that they need to deal with.

The best thing you and I will be able to do in such a situation is to keep ourselves below the radar, so that we aren’t noticed. If we are not noticed, hopefully we will be left alone.

Should orders go out to confiscate any supplies that are stockpiled, it would probably be a good time to put our bug out plans into effect. Hopefully, we’ll all have a cache of supplies elsewhere, so that when we lose the supplies that we have stockpiled at home, we’ll still be okay. 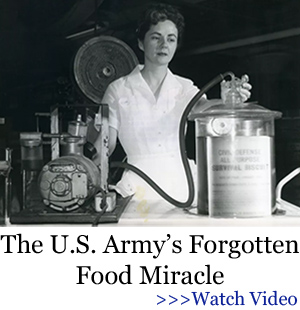 Top 6 Most Dangerous Medicines For People Over 40; Are You Taking any of These?