Table salt, also known as NaCl (sodium chloride), is just as important to human survival as food and water, and our bodies would be in serious trouble in a short time without it. It is an important mineral for the generation of nerve impulses, heart and metabolic functions, as well as the regulation of electrolyte and fluid balances.

Processed foods have more than enough sodium already packed into them, so people like me who never reach for the salt shaker get by just fine, but in a situation where the SHTF, processed foods might become scarce and knowing how to obtain this essential mineral will be necessary to survive.

Salt today has a generally unfavorable reputation in the developed world- everyone is trying to cut back on their intake for health reasons. This is obviously because there is so much of it, but it wasn’t always so.

Wars have been fought over it, nations have used it as currency, populations have been crushed by taxation on it; you can bet that if these times of civil unrest snowballs into the collapse of markets and industry, salt will again be respected, even becoming a valuable commodity for trade.

This value will most likely increase the more inland you go, far from the coasts where the vast oceans contain 35 grams of salt per liter of water, providing a limitless supply.

But this technique I will demonstrate works to extract it from saline waters inland, too, of which it might surprise you are quite abundant.

Related: How to Make Your Own Apple Sugar

All salt comes from the sea, and even the rock salt mined out of the earth is the remnant of ancient oceans which once covered the land. Freshwater streams collect salt as they flow over the soil, but because they are always moving the saltiness levels stay low.

When this water constantly flows in but has no outlet, as in terminal lakes like Great Salt Lake in Utah, all of this salt accumulates. Great Salt Lake ranges from 50 to 270 grams of salt per liter, and is therefore saltier than seawater.

Besides these salty lakes, brine springs are saturated with salt dissolved from underground and brought to the surface, which can be found in many parts of the world. 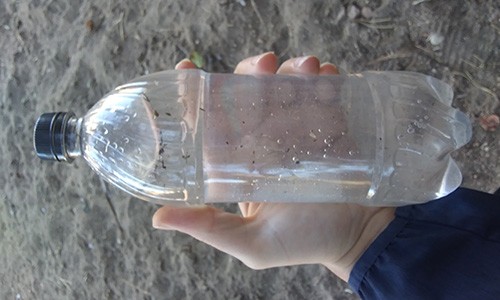 Filtering the saline water (from a brine spring, salt lake, or ocean) first through anything such as cheese cloth, a shirt, even a sock, will extricate most of the sediment and debris contaminating it. 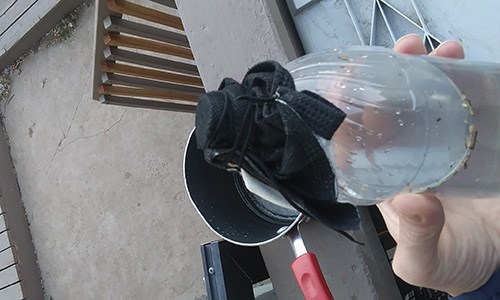 Then, all that is needed is a method to evaporate the water, leaving the salt behind. The fastest way to evaporate water is obviously to turn it into steam vapor by boiling it. 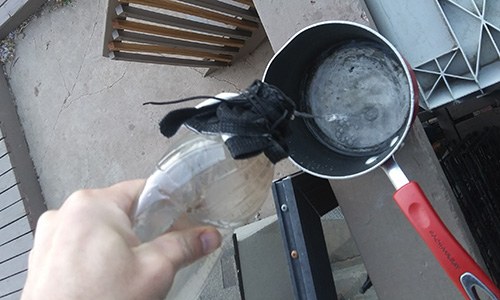 I have found through trial and error that boiling at high heat until half of the water has evaporated, then adjusting the heat gradually down to medium and low, will prevent the salt from scorching.

I also stir as much as necessary to keep less salt from accumulating on the bottom of the pot and risk being scorched. 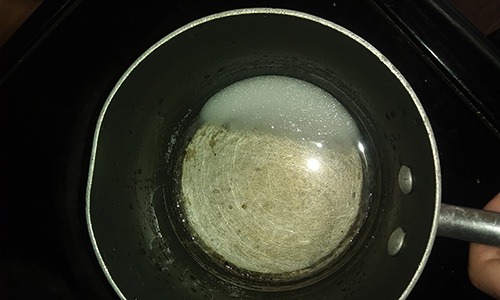 As more water evaporates, the salt starts to become visible. It will have a “caked” appearance in this stage of the process, with the consistency of wet sand. I am using a stove for convenience, but boiling over an open fire works the same, while lifting the pot higher above the flames will reduce the heat similarly.

Use the back of your hand as a thermometer- if you can only hold your hand over the flames for five seconds before it starts to hurt, at that height your pot is on “high” heat.

Before the salt starts to burn, you will need to take it away from the fire and use a different method to evaporate the remaining moisture. The sun can be used at this stage, and in fact can be the only method if fuel sources for a fire are scarce.

Many salt work facilities of the old days went out of business after the surrounding timber was used up to heat the fires necessary to evaporate the water in salt brine, including the ruins of the one near where I harvested mine from.

The sun can take days or weeks to accomplish this depending on weather conditions, however, and again, for convenience, I am using the electric oven as a speedier substitute. 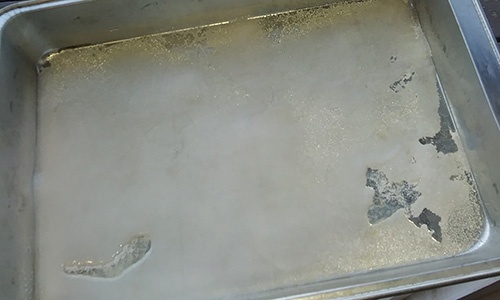 The setup is the same, either way. The thinner you have the water or damp salt spread out beneath a heat source, the faster it will dry.

Something like a glass baking pan or a metal baking sheet works well, but you can improvise with your imagination and whatever materials you find at your disposal.

If using the oven like I am, the pan just needs to be placed inside with the heat on the lowest setting, which in my case is 170 degrees Fahrenheit. If placed outside and under the sun, I would recommend using some sort of a covering that still provides exposure to the sun but not bugs and bird droppings, like a thin cloth or similar.

It is going to take some time to get the salt to have the consistency of the sort you buy at the grocery store or see on a restaurant table. The truth is, it might never be exactly like this, because companies add other anti-caking chemicals to table salt so that it falls so evenly out of a salt shaker.

The salt crystals you get in this home-made approach will more than likely be less uniform, and not unlike the fancy sea salts you see chefs use on television. 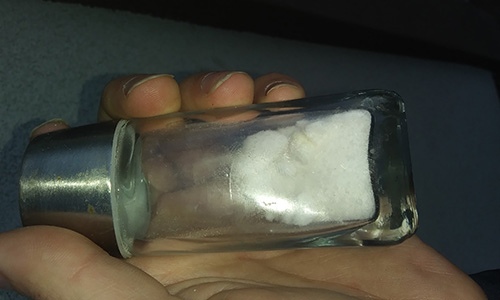 There is a trick I use to suck out any remaining moisture clumping the salt together once I store it, and you might have used the same trick if you’ve ever tried to dry out a cell phone you dropped into a puddle: rice.

Neither a salt shaker, nor a few grains of rice should be too hard to scavenge no matter what the world comes to in a SHTF scenario, and a small layer of rice grains at the bottom of a shaker will absorb so much of that remaining moisture.

This is just another very simple technique to help you be more self-sufficient and independent.

Salt is a mineral fundamental to animal life, but it doesn’t have to be anything to stress over. It is abundant, and with a basic overview of where it comes from, not much more than common sense is needed to attain it.

8 Ways to Use Your Rancid Oil for Survival