If you’re a prepper, chances are you’ve got a few guns and a bunch of ammo around. Or maybe you’re the kind that has a lot of guns and a huge pile of ammo around. Either way, guns and ammo are just one more part of prepping – and important part. How important is something that each of us have to decide for ourselves.

It’s never hard to convince yourself that you need just one more gun, and you know just which one it is. There are a lot of sweet guns out there, making it easy to justify that “one more”.

Should the proverbial brown stuff ever hit the rotary air movement device for real, those guns may end up being the only thing that keep you and I alive. Of course, I’m not sure how some of my friends are going to use 17 rifles and 39 pistols at the same time, but that’s not my problem. I’ll leave that for them to figure out.

No, I’m not going to tell you that you should own a particular type of gun, or that you should stockpile X number of rounds of ammo. Everyone has their own opinion on that and mine is no more valid than anyone else’s. But there are a few common mistakes I see, which I thought I’d point out to you.

As Far as Quantity Goes

Yes, you read that right. I’ve found that it is possible to buy too much ammo, as hard as that may be to believe. The thing is, many of us subscribe to one of two theories. The first is “the more the merrier” and the second is “1,000 rounds per caliber”. Neither of those is necessarily right and neither of those will necessarily help us to survive. 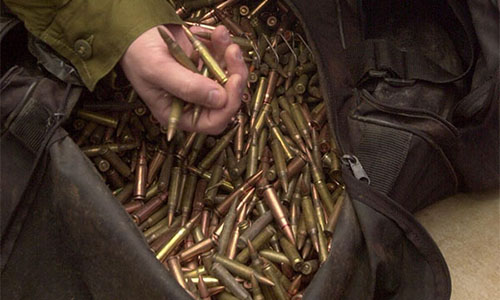 There are calibers for which “the more the merrier” makes sense, specifically your main defensive and hunting calibers. When it comes to your AR-15 and your hunting rifle (especially small game hunting rifle), I can see where there is no point at which you can say, “That will be enough to last the rest of my life in a post-disaster world.” There’s just no way of knowing how much ammo any of us are going to need in that situation.

But on a more realistic level, how many battles do you think you can survive, where gangs are attacking your home? Infantry soldiers carry a basic load of 320 rounds for their rifles, which is considered to be enough for one day’s fighting. Do you really think you’re going to survive more than two or three days of attacks on your home where you use as much ammo as an infantry soldier?

Then there’s pistol ammo. One firearms instructor gave the perfect description for why we carry pistols – they’re so that we have something to fight with, while we’re making our way back to our rifles. With that sort of purpose and with most of us carrying two spare magazines or less; do you really think you’ll ever use 1,000 rounds of pistol ammo in a post-disaster survival situation?

Yeah, you might use 1,000 rounds in training. I can easily go through 100 rounds in one trip to the range. But that’s not from my prepping stockpile; that’s practice ammo. Not the same thing.

As Far as Expenses Go

There are two keys here: buying in bulk and buying from a low-cost retailer. Buying 250 round boxes of pistol ammo works out to be roughly 20 percent cheaper than buying 50 round boxes. Larger quantity boxes, or even cases, can be even cheaper. Besides, you can often get those larger quantities packed in ammo cans or other moisture-proof containers, giving you a little extra bonus for your money.

Some of the small-scale ammo manufactures will sell by the can at gun shows. I’ve found that to be about the best deal going, other than buying it off of someone who’s a little cash short. You’re getting the benefit of both buying directly from the manufacturer and buying in bulk, at the same time. If you don’t trust that ammo for your carry gun, you can at least use it for your practice ammo at the range and save yourself a bundle.

If you’re a gun collector, chances are that you’ve got a lot of different calibers of firearms in your collection. That’s okay; there’s nothing wrong with that. But I seriously doubt that all of those firearms are part of your survival plan. You probably have just a few guns which you consider your survival guns for yourself and your family.

Hopefully, you’ve selected guns that use commonly available calibers: .22LR, 9mm, 5.56, .308, etc. That makes sense, if you ever have to resort to scavenging ammo or bartering for it. But it also makes sense to have some common calibers for your whole family to use. If your wife’s pistol is a 9mm, because a .45 is too much for her, then plan on carrying a 9mm too. Sharing ammo will save you money and help ensure that you have enough for both guns in a time of crisis.

My EDC pistol is a .45. I carry that because I’m working under the assumption that if I ever have to face off against a criminal, they’ll either be high on drugs or adrenalin. Considering that the .45 was developed for that very purpose, it makes sense for me to carry it as my EDC gun.

But my survival gun is a 9mm Glock. That’s because my wife’s survival gun is also a 9mm Glock; but hers is pink. By carrying the same caliber and the same make, we have commonality of both ammunition and repair parts. Not only that, but I only have to learn how to work on one kind of pistol, not two. Both of our survival rifles are AR-15s, chambered in 5.56 for the same reason.

Believe it or not, ammo isn’t moisture-proof. While it would seem that it should be, with everything crimped tightly together, it isn’t. The only ammo I know of which is made to be moisture-proof is military ammo, which has shellac over the primer, ensuring that no moisture can get in through that vulnerable route. 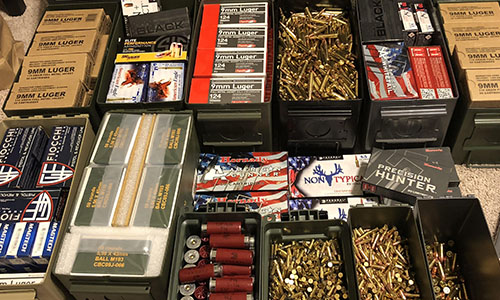 I suppose you could shellac the primers on all your ammo, if you wanted to. But I’m not sure if that shellac would flake off in your gun’s action while you were shooting. So I wouldn’t do that. But you still need to keep your ammo stored in some moisture-proof way, especially ammo in your stockpile, which you’re planning on keeping for a long time.

The solution is to keep your ammo stored in ammo cans. There’s really more to keeping it stored that way, than just being tacticool. Ammo cans, both the old metal ones and the newer plastic ones, are intended to be moisture-proof, so as to keep ammo from going bad. The US Army had them first developed that way during World War II, to avoid problems with ammo going bad during beach invasions.

Later, the M2 ammo can was replaced by the M2A1, the metal ammo can we all remember as being associated with belted .50 caliber ammunition. That can, and those that followed, have been used for many calibers, all with the intent of making the ammo easy to handle and keeping it protected from moisture.

Where to Keep Your Ammo

Keeping all your ammo in one place can end up being disastrous, especially if that one place isn’t where you need it to be. If your home comes under attack during a time of crisis, you may end up fighting from several different parts of the house. That means needing to have access to ammo, wherever you are.

Worse than that, the bad guys could gain control of whatever part of the house you have your ammo stockpile in. Should that happen, they’ll have your ammo and all you’ll have available is whatever is in your gun and on your person. Spreading that ammo out a bit helps to ensure that you’ll always have some of it available to you.

Spreading it around means having some of it stored at your survival retreat too. If you think you’re going to take your ammo stockpile along with you when you bug out, think again. Ammo is heavy, so even if you manage to bug out in a vehicle, you’re going to be limited in how much you can take along. If you have to abandon that vehicle and head out on foot, about all you’re going to be able to carry, along with everything else in your bug out bag, is a couple of boxes. That’s not going to be enough.

Anywhere you build a cache of supplies should also include a cache of ammo; not a lot, but enough to restock your primary survival guns. A box of pistol ammo and a few boxes of rifle ammo, to replace what you might have used getting to that point makes sense. But don’t put more in those caches than you’ll be able to reasonably carry. You won’t want to leave it behind for someone else.