A lot of people think being a prepper is all about stocking up on supplies. True enough, you can’t be very prepared without building up stockpiles of essentials – but that’s only half the battle. Once you’ve got it you need to store it, and that’s a lot more complicated than just piling it in your basement and forgetting about it until the fertilizer hits the cooling unit.

Preppers think a lot about food storage, which makes sense; food is essential, but it’s also perishable, so you need to make sure it’s stored well enough that, when you need it, it isn’t going to poison you. Water storage gets a lot of attention too, for the same reasons. There are some things that tend to get overlooked, though, and one of them is almost as important as food and water – ammunition. 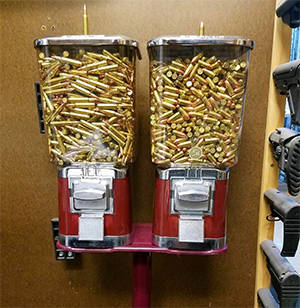 Ammo comes in a sealed box, and even if you store a bunch of loose cartridges in a paper bag they’re not going to visibly change much over time. The brass might discolor a bit, but this is ammunition, right? It isn’t like food; it doesn’t go moldy if you leave it on the counter too long.

Maybe not, but ammo still needs to be properly stored if you’re going to rely on it. Badly stored rounds might look fine, but they could be deteriorating inside and you won’t know a thing about it until you pull the trigger. Then you could find yourself with stoppages, bullets that don’t leave the barrel with a consistent velocity or trajectory – even dangerous hang fires or breech explosions.

Your ammo stockpile is there to let you harvest game and protect yourself. If you can’t rely on it, surviving through the crisis is going to be a whole lot harder – and if there’s civil unrest in your area, maybe impossible. Follow these tips to make sure you have a supply of ammunition you can rely on.

In a survival situation it’s vital you know that, when you pull the trigger, the round in the chamber is going to fire reliably and send its bullet flying true to the target. The only way to guarantee that is to look after your ammunition properly. Follow these tips and your guns will be reliable, life-saving tools after the SHTF. Get it wrong and they’ll just be badly balanced clubs.