That’s why the modern prepping movement is so important. We are the only ones, with a few notable exceptions like the Amish, who are training and equipping ourselves to live in a world where we don’t have all that high tech available to us.

That’s not to say that we should ignore technology altogether. There are a number of ways that I and others have written about using technology to help us survive. But there’s a huge difference between using that technology to assist us and being dependent on it.

Being able to use your phone’s GPS to find your way is great; it’s easy and it’s convenient. But if you don’t know how to use a map and compass, you’re in trouble if something happens to your phone. It all boils down to how well we are able to survive without it.

Related: 5 Maps You Should Have At Home

If we’re going to do our best at surviving in all situations, then we need to look at everything we have around us, from the viewpoint of how we can adapt those things for use in survival. Most of us do that all the time, sometimes even without thinking about it. But there are some things we just take for granted that we won’t have, so don’t even consider. Yet those items could be useful too.

That was my attitude when someone gave me my first drone. While most people think of a drone as a toy, unless they’re a professional photographer, I started thinking of it from a survival viewpoint. But then, I do that with pretty much everything. Nevertheless, I found some very practical uses for my drone.

We all know the risk of someone attacking our home during a time of crisis. With 98% of the population running short of supplies, we can be sure that we’ll be at risk of attack, even if that attack means nothing more than someone sneaking over our fence to raid our garden. 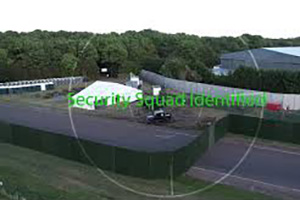 This is probably one of the best places to put a drone to work.

It can be used to perform a perimeter patrol, watching to see if anyone is trying to break in. Better yet, it can range beyond our property’s border, looking for those who may be headed our way.

Any group doing so would be suspicious and could then be watched to discern their intentions, while the team gets ready to defend the home.

We might fantasize about being able to arm our drones and use them in a more direct defensive role, we’ve got to be careful about that. While the larger commercial drones could work in that capacity, there are some real risks in using a drone in that way.

Besides there being laws against the use of autonomous weapons, which might be applied by the courts, it’s extremely easy to misinterpret someone’s actions and attack them prematurely, even though they aren’t yet a threat. 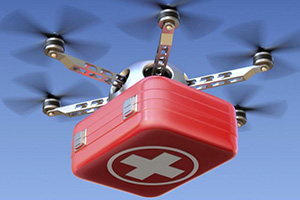 Besides home security or security around your survival retreat, the big use of drones is for scouting missions.

Being able to send a drone out to find out important information for you, allows you to avoid putting any team members at risk, save time, and gather more information.

Scouting was the original military mission of drones and they are still excellent at that task.

Essentially the home defense task I mentioned above is a scouting mission; but that one hasn’t a limit to just the home. 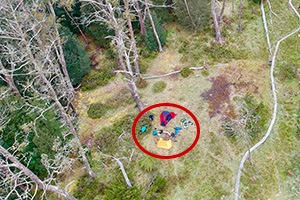 It doesn’t matter if you’re scavenging, going to the market to do some bartering or just visiting another team member, being able to look ahead provides the means of finding potential threats, before they are a threat. Then an informed decision can be made about whether to continue as planned or take a detour.

Scavenging will become a major skill and pastime during a long-term survival situation. If we are going to ever manage to put society back together, it will require finding what resources are available around us and figuring out how to put them to best use. 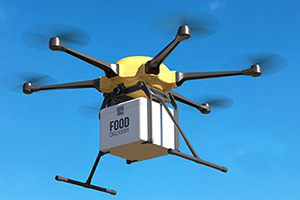 Warehouses, shipping centers and factories will all have useful things, which can be used to help rebuild society. Searching for those things can be extremely time-consuming though.

Here again, a drone can be helpful in scouting out things before we even set foot in an industrial area.

While the drone may not be able to get inside of locked buildings, it will be able to look over the property, giving us some indication of whether there is anyone around and possibly find some inventory that’s stored outdoors, giving us an idea of what might be inside the building.

Some resources may not be visible, except from the air. A house I used to live in had a canal running behind it; so I had a ready source of water if the city water went down. But if I hadn’t been told it was there, I wouldn’t have known. There was no indication of a canal there and it was difficult to get outside the back fence to take a look.

We’ve all seen the images of highways turning into parking lots during a bug out. Interestingly enough, most seem to have been taken by a drone. The aerial vantage point makes things much clearer, than they are at ground level. 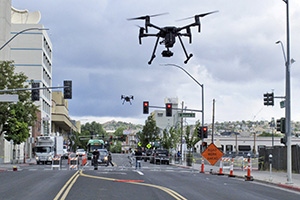 That same vantage point can help us get an idea of how far the traffic jam extends, whether the exits and side streets are clear and even find alternate routes.

We’ll be able to see things that others can’t, giving us the advantage. Granted the range of any drone has a limit, but it’s more than you can see, standing on the ground.

Drones can be used to help find areas where game is active. That’s not the same as finding the game itself and keeping an eye on those animals until you can close and shoot.

I doubt that would work in most cases, as deer and other game animals tend to be rather skittish. But if you can find the areas they feed in, that saves you time on the hunt. It’s kind of like using a trail camera, but can cover a wider area. 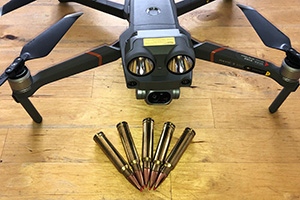 Of course, there’s a good chance that much of the hunting that will happen during that time will be hunting of cattle and hogs.

While I’m sure the farmers and ranchers will try to stop that, shooting more than a few would-be rustlers, I’m also sure that people’s hunger will drive them to keep on hunting for the domestic American cow.

Cattle and hogs are much less likely to be startled by the sound of a drone, making it an easy way to find the desired animals and steer you to where they are.

A Few Details Before You Buy A Drone

While I’m sure that a drone will be a very useful survival tool, I’m also sure that some drones are nothing more than toys. Depending on what you really need, those toys may not be up to the task. There are a few key things you should consider, when looking at a drone to buy.

As with anything else you buy for survival, you’ll definitely want to take some time to become proficient in flying your drone. They’re not as easy as they look. But with a little practice, you can use them for barnstorming (that might be useful when spying on the neighborhood). 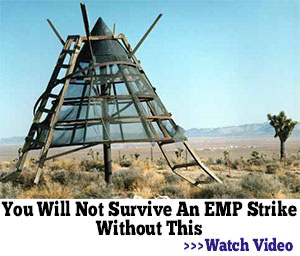