Although self-defense is not normally listed as one of the top three survival priorities, in a way it supersedes them all. It’s pretty simple really – if someone kills you, then it doesn’t matter if you have heat for your home, water to drink or food to eat. The normal survival priorities we think of only matter as long as you’re alive. If someone or something manages to kill you, they won’t be priorities at all.

In the current situation we find ourselves in, there are two separate and distinct threats to our lives. The first is the disease itself. Collectively, we are fighting a war against an enemy too small to see and too deadly to ignore. While it may take that enemy time to kill and it may not be able to kill everyone it attacks, it can still kill, nevertheless. That’s something we just can’t ignore.

Not only can it kill, but it can come into our homes and kill us there. And it can do it, without us even knowing it has come. That’s scary, if you think about it. An enemy that you can see is bad enough; one you can’t see and have no way to detect, is much more deadly.

But that’s not the only threat we face. There’s the threat of desperate people, who decide to do desperate things. While we haven’t seen much of that yet, there have been a few cases of people attacking shoppers to steal what they had. If things follow the normal pattern seen in the wake of most disasters, this will increase in the weeks to come, with people breaking into homes, in order to get the supplies that they need.

Protecting Your Home From Home Invaders

Let’s deal with the problem of people breaking into your home first. This may not happen, simply because the stores are still open. If the supply conditions continue to improve, it will mitigate against people attacking others to get what they need. But there’s a flip side to that coin. As more people lose their jobs, we’re likely to see an increase in home intrusions. So it only makes sense to be ready. 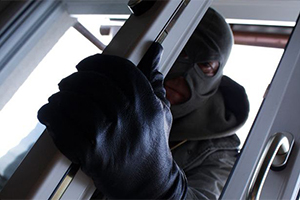 The one good thing we can say is the fact that home intruders are not very imaginative people. They all come in the same way – through the front door.

The classic attack is to kick the door open and for two to three people to rush in, overwhelming the residents.

You’ve probably heard that a deadbolt lock on your door will keep that from happening, but that’s not true. While even the cheapest of deadbolts is strong enough to withstand that kick, the deadbolt only goes into a small striker plate in the door frame. That frame is ¾” thick pine and the edge of the hole for the deadbolt to go into is only ½” from the edge. When someone kicks the door open, the deadbolt breaks through the door frame, allowing them entrance. 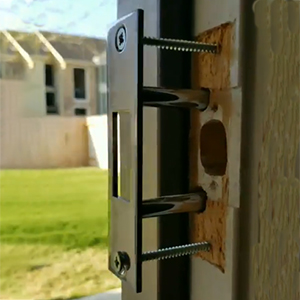 This is actually a fairly easy problem to fix. All you need to do is replace the deadbolt’s striker plate and the door lock striker plate with what’s known as a “security striker plate”.

This is a longer plate, which covers both locks and allows many more screws to be used.

That spreads the force of the kick out farther, so that it isn’t concentrated in one place, allowing the intruder to kick the door open.

When installed properly, with 3” or longer screws, the screws go through the door frame and into the studs behind it, so that the force of the kick is actually transferred to the home’s structure, which is more than they can break.

For greater security, you can add a door club to the bottom of the door. This is a device that goes into the floor, essentially acting like a second deadbolt. You can also use a door prop, if you have a hard floor surface (not carpeting) for it to brace against.

Related: The Ultimate Bug Out Home For Just $250

Protecting Your Home From The Pandemic

The harder challenge is keeping the invisible enemy, the virus that’s causing the pandemic, out of your home. The basic problem is that we can’t see the virus. It’s so small, that we could carry thousands of them into our home on an envelope received in the mail, a package of food we bought at the store, or our hands. There’s no way we’d know if we had it or not.

I know it sounds paranoid, but the only way we can keep that virus out of our homes, is to assume that everything is contaminated. 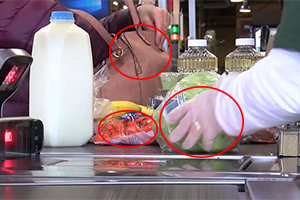 All it takes is someone who doesn’t know they are infected to cough on a shelf of products in the grocery store.

Or it can be  your local mailman the one having the virus on his gloved hands, and your package will be contaminated.

If you bring that package into your home, you’ve just let the disease in. The only question then is, which family member will be the one to get sick?

Social distancing helps, when we follow it. Most of us aren’t visiting friends and our friends aren’t visiting us. So if one of them gets infected, he won’t bring it into your home. Of course, you won’t know if they bring it into your home for a couple of weeks, so it’s best not to let them come visit. If they insist, then I’d make them decontaminate when they arrive at your home. 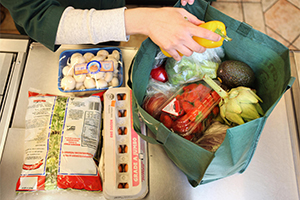 But what do you do about those packages? The things you buy at the store or that come in the mail? That’s the bigger problem.

I know it’s a lot of extra work (trust me, I know), but it’s the only way you can be sure of keeping your family safe. All it takes is one package coming in the door, which hasn’t been decontaminated and your whole family could end up sick, or worse.

So, how do you disinfect all that stuff?

It’s not really all that hard, although it can be a bit time consuming. To do it, you need paper towels and some sort of disinfectant spray. I prefer to use something that contains chlorine bleach or at least 60% alcohol. For the bleach, mix 1/8 cup, plus 4 teaspoons with a gallon of water to give you the right concentration. Then put it in a spray bottle for use. 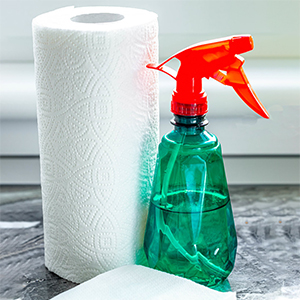 It’s best to disinfect things outdoors, then pass them into the house. My wife and I did this today, when we got back from the grocery store.

We would disinfect the things outside, then pass them through the door, placing them on a chair.

My last swipe with the paper towels would be the part of the container that I had been holding. She would then pick up the decontaminated items from the chair and put them away.

In this manner, only I was touching the contaminated items, and I was wearing rubber gloves. She never touched them.

Soak three or four paper towels with your disinfectant. You want them just shy of the point where they are dripping. Then:

Related: How to Make Black Garlic For Boosting Your Immune System

All the boxes, bags and other containers that aren’t disinfected should be immediately tossed into the outside trash can. Don’t even bother taking them indoors. Then, if you just came back from the store, disinfect your car, paying special attention to the door handles, steering wheel, gearshift level, turn signal lever and anything else you might have touched.

One last detail – if you’ve gone through all that trouble, on the chance that COVID-19 virus was on something you bought in the store, then there’s a good chance that the virus got on your clothes while you were there. So take your clothes off and put them in the laundry. Then wash your hands before dressing again.

Like I said, I know it sounds paranoid, but am I being paranoid enough? Only time will tell. 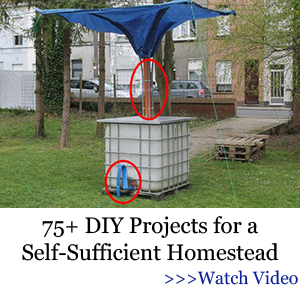 16 Items FEMA Tells You to Stockpile and Why