If there’s anything that’s going to identify the COVID-19 pandemic, in most people’s minds, it’s the empty store shelves. As a nation, we are accustomed to being able to go into the store and get anything we need. If our local store doesn’t have it, no problem. There will be another store down the road where we can pick it up.

That’s not the case right now. At least, not from everything I’m seeing. I’ve been taking daily trips to my supermarket, ever since things have started, just so I could watch the shelves empty out. I know that sounds a bit strange, but writing about survival is my work. We’re living through a real-life test of everything I’ve taught for the last 20 years.

To a large part, many of the things which have been selling out make sense, when you take into consideration the current situation. I wouldn’t normally expect meat to sell out, but then, there is no threat to our electrical supply. People can freeze that meat, something we don’t normally expect them to be able to do in an emergency.

But the one that has surprised everyone is the run on toilet paper. Apparently someone decided that they needed to stock up on toilet paper to survive the pandemic. Others saw them doing it and the idea spread. Pure panic buying.

But now it’s gotten to the point that people are buying toilet paper whenever they can, just because the stores are out of it. They want to make sure that they don’t run out of TP. 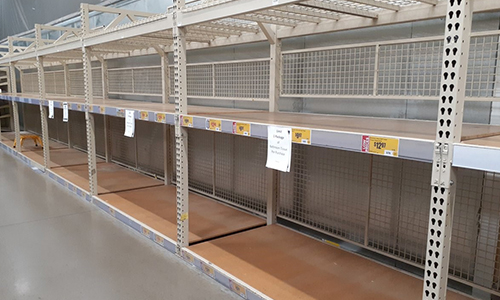 This phenomenon has led to a large collection of memes and jokes on the internet, including the 2020 Commemorative Bling Earrings: 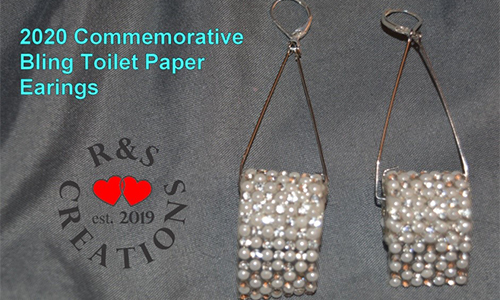 Is there any rationale behind what’s going on, or is it just panic? That seems to be the question.

A Visit to My Local Supermarket

I tried to go to my local grocery store this morning, with the intent of taking pictures of the shelves, before the shoppers arrived. I was then going to return this evening, to show the difference, taking the same shots, from the same locations. The idea was to show that the stores have been restocking overnight, but people are buying things out, as fast as they can stock the shelves.

Here are some pictures I managed to take with my phone of the meat department, the bread area and the frozen foods area: 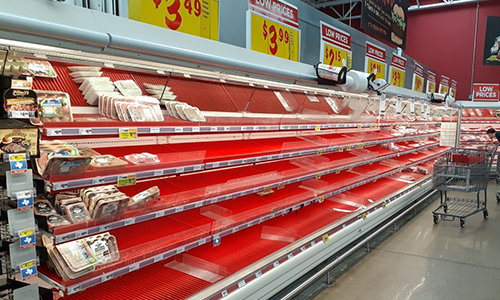 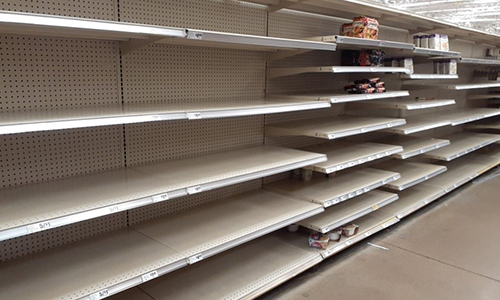 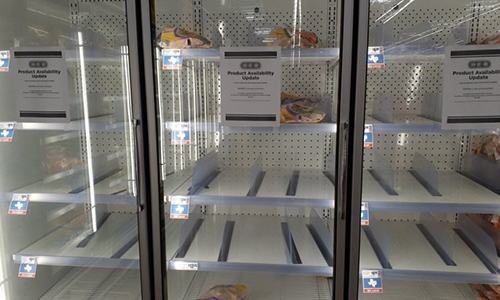 Unfortunately, it is apparently against the store’s policy to allow people to take pictures, so I was asked to leave. The pictures above were taken last week, with my phone, before I knew that I couldn’t do it.

As I waited in line to get in the store, a member of management came out, making announcements. One of those was that the store had only received 23 packages of toilet paper in their overnight delivery. He followed that by saying that another store a few miles away had received a whole trailer load of it. While the line didn’t empty out to go to that other store, a number of people did leave.

Related: The 10 Best Prepper Foods You Can Find At Costco

The store was only allowing 20 people in at a time, which gave me an opportunity to see the first people coming out of the store. Since stores are running decreased hours, this also means that at the end of the day, when they close their doors at 8:00 tonight, that line will still be just as long, if not longer. 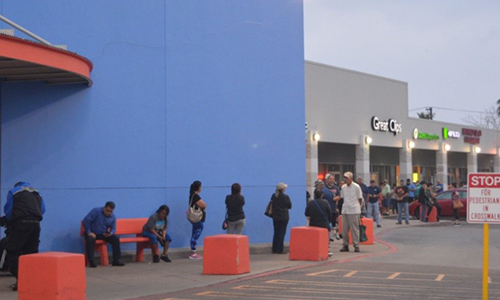 With the amounts of goods being shipped in, the stores are not succeeding in fully restocking overnight. The trucking industry is literally working overtime, trying to move product to the stores, but there just aren’t enough trucks and truckers to meet the demands of everything that everyone is buying. According to one store official I spoke to, they don’t expect to have normal stocking levels back in place until mid-summer, at the rate things are going.

Even if you get in the store, there are category limitations on buying just about everything, from ground beef to canned goods, via the paper goods aisle, of course. So if you’re trying to stock up, this is the wrong time to do so. That would literally require getting in line to get into the store early, an hour before opening time, every single day. 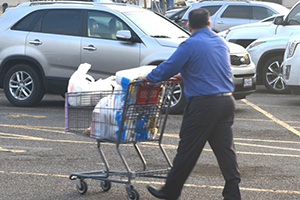 This shopper was amongst the first people to get into the store. As you can see, he managed to get toilet paper and water, amongst other items.

I couldn’t see what else they bought, without stopping them and asking. That would require breaking social distancing, so I didn’t bother to do so given the current situation.

Related: Is it Safe to Drink Old Stored Water?

Between my conversation with the store’s management, shoppers waiting in line and those in the trucking industry, I’ve got a few final points I’d like to make:

So, how are things in your area? Are the store shelves empty? Are your supermarkets doing any better at restocking than mine are? Are you ready for the next few months?

10 Ingenious Ways to Keep Moths Away From Your Grains

22 Cans You Can Purchase for $1 or Under