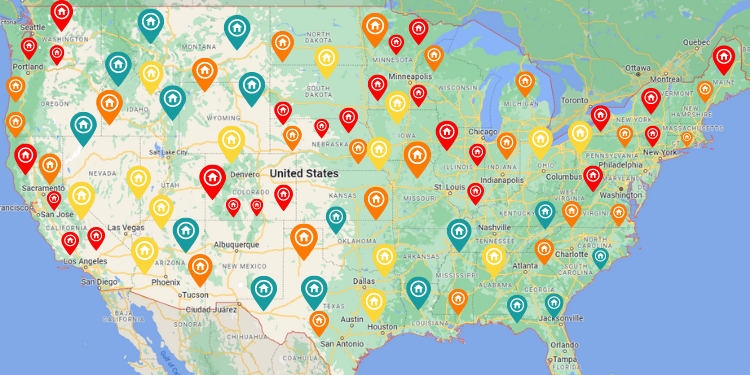 Self-defense is supposed to be a universal right. You don’t see anyone “policing” nature, telling deer that they can’t use their antlers against a coyote’s teeth. While the deer have a definite disadvantage in that contest, they can still try to do what they can to defend themselves.

It’s only amongst the human population that some people think they have the right to deny others the ability to defend themselves against the two-legged predators in our midst. The gun control debate is an old one, even going back to the time when the British ruled the original 13 colonies, before the Revolutionary War.

We aren’t alone in this, as conquerors and oppressive regimes throughout history have worked to disarm populations under their control. When all the weapons are in the hands of the government, it’s hard for the population to rebel… or even to defend themselves against oppressive government overlords.

But disarming the population doesn’t make them any safer, regardless of the statistics that gun control groups manage to put together. The funny thing about those statistics is that both sides can dig up statistics to back up their point of view, pretty much negating the value of statistics in the argument.

The truth is, you can always back up your point of view with statistics; all it takes is cherry picking the data and statistics you use. Unfortunately, that doesn’t stop people from using them.

The theory behind gun control is that taking guns out of circulation and/or making them harder to buy will stop criminals from buying them. That’s a noble sentiment… if it worked. But according to a report from the U. S. Department of Justice, 89.9% of the firearms used in crimes aren’t purchased in retail establishments.

So no matter how much effort is put into passing laws which make it harder to buy and own guns, the only difference those laws can possibly make is to make it harder for law-abiding citizens to buy guns, making them more vulnerable to criminals.

Criminals are criminals because they break laws; that’s the simple truth. No number of laws is going to stop them from doing that.

All that any gun control laws can do, in the fight against crime, is to give the DA’s office additional charges to bring against criminals who are already being tried for committing more serious offenses. Fortunately, we have the Second Amendment as the ultimate legal protection against the loss of our right to keep and bear arms.

The gun control crowd is constantly attacking that right, trying to chip away at it at both the state and federal levels; but overall they are not very successful.

It is only at state level and in states where Democrats historically have a majority control of the government, that more and more restrictive gun control laws are enacted. This makes those states worse ones to live in, when it comes to defending home and family.

One of the most useful ways of looking at gun control laws, from the viewpoint of being able to defend yourself and your family is to look at how restrictive that state’s gun control laws are.

While some gun control laws may seem trivial or mere inconveniences, they add up to making it more difficult to defend your home, when the time becomes necessary.

A good example of this is magazine restrictions. In reality, you can defend yourself effectively with 10-round magazines; you just need more of them and need to practice magazine change-outs. But adding that restriction to others, reduces your effectiveness in a prolonged shootout. 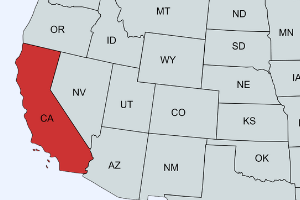 California – the left’s testing ground for new restrictive laws of all types.

It has a murder rate of 8.5-gun deaths per 100,000 residents. They are actively seeking to invent more gun laws to pass.

Related: What Do You Think About These 5 States’ Gun Control Bills?

New York – the first state to adopt gun industry liability laws, helping encourage gun manufacturers to move to other states. They have 5.3-gun deaths per 100,000 residents. 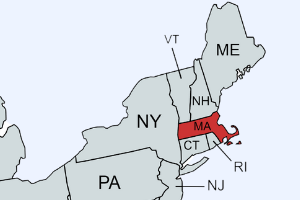 Massachusetts – one of only two states that require locked storage of any firearm not under immediate control of the owner.

This is helping them achieve the second lowest rate of gun ownership, yet they still have 3.7-gun deaths per 100,000 residents.

Connecticut – has pushed gun control heavily since the Sandy Hook shooting in 2012. They are one of the only states to institute bans on “assault rifles” and “high capacity magazines,” both of which have received strong resistance from the general population. Even with their illegal gun removal program, they still have 6-gun deaths per 100,000 residents.

Illinois – home of some of the most restrictive gun control laws in the nation, but has a real problem with gun deaths, at 14.1-gun deaths per 100,000 residents, mostly due to gang activity. 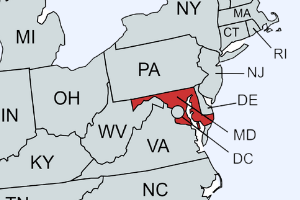 Their restrictive gun laws have resulted in 65% of the firearms recovered from crimes having been bought out-of-state. They still have 13.5-gun deaths per 100,000 residents.

New Jersey – requires criminal background checks and permits to even own a firearm, which hasn’t stopped them from having 5 gun-related deaths per 100,000 residents.

Colorado – once a conservative stronghold, with lots of gun owners and hunters, Colorado has largely been taken over by former residents of California. 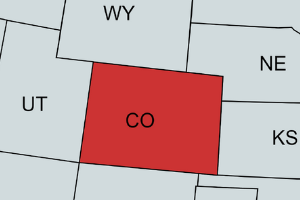 They have pushed for more restrictive gun control laws since the Aurora movie theatre shooting, increasing background check requirements and requiring that domestic abusers relinquish guns if there is a restraining order against them.

Obviously, any of these states would be difficult places to defend yourself in court, if you managed to navigate through their gun control laws, but were put in a position where you would have to use a gun to defend home and family.

Generally speaking, the more restrictive the laws, the more firmly the courts come down on those who defend themselves.

States Without A Castle Doctrine

One of the most useful legal tools for those who need to defend home and family is what’s known as the “Castle Doctrine,” also referred to as “Stand Your Ground” laws.

⇒ How To Make Your House Invisible To Looters

The basic idea here comes from Exodus 22:2 in the Bible, where it says that if you strike a thief who has broken into your home and he dies, you are not guilty for his blood.

Yet even with it being in the Bible, there are 11 states who officially disagree with God and have passed laws requiring that the residents of a house retreat, abandoning their home, rather than defending themselves or their property. These states are: Connecticut, Delaware, Hawaii, Maine, Maryland, Massachusetts, Minnesota, Nebraska, New Jersey, New York, Rhode Island. 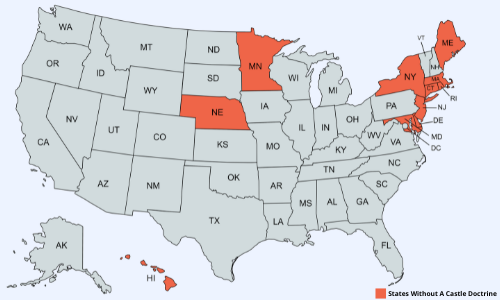 Generally speaking, these “duty to retreat” laws don’t give any leeway for self-defense, even though their basic intent is to restrict the ability to defend the home, rather than defending yourself and your family. That minor difference ends up translating into a lack of right to defend yourself in your home, even if you are under attack.

The final area we’re going to look at involves concealed carry laws. Over the last couple of decades there has been a very real trend towards more and more states granting more and more liberty to their law-abiding citizens in their right to both carry concealed firearms and carry openly.

There are two actual legal principles that take part in this: that of concealed carry and that of constitutional carry.

The first laws that are important here are those that restrict or allow concealed carry. Not too many years ago, it was extremely hard to receive a concealed carry permit anywhere in the country, without the ability to demonstrate extremely good cause for needing it.

Store owners who made large cash deposits at night might be able to get them, but the average person who wanted the ability to defend themselves from criminals couldn’t.

This has been changing through the last couple of decades, with more and more states shifting from a “may-issue” policy to a “shall-issue” policy. The difference is that in shall-issue states, a license to carry concealed will be issued, as long as the person applying for it meets the requirements.

Those requirements vary from state to state, but generally include a background check, no criminal history, not having been adjured as mentally incompetent and of a sufficient age to be granted the license.

Related: Concealed Carry & Why Do You Need One

May issue states also have a series of requirements to get a concealed carry permit; but that’s not all. Meeting those requirements only means that the appropriate department of the state’s government will consider issuing that permit. Whether or not they actually issue one is totally dependent on the officials making those decisions.

More often than not, they will decide that there is no reason to issue the permit. May issue states include: California, Connecticut, Delaware, Hawaii, Maryland, Massachusetts, New jersey, New York, Rhode Island. 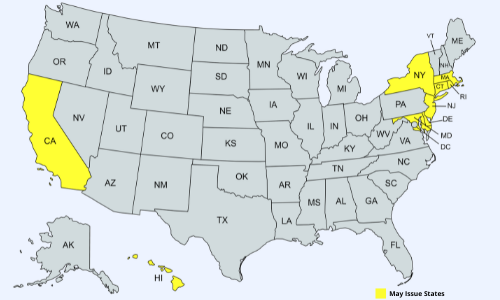 A couple of decades ago, the only state which had constitutional carry, the right to carry a firearm based upon the Second Amendment to the Constitution was Vermont, the only state to never restrict firearm ownership.

What this means is that the 25 states which have not embodied constitutional carry into law are no longer the “norm” and are in fact restricting the ability of their citizens to defend themselves. Other states have legislation in the works, which will reduce the number of states without constitutional carry laws on the books even further.

You may have noticed that the same states keep showing up over and over again in those lists. That’s not surprising, as these are the three main areas in which those who don’t want us to have the ability to defend ourselves try and restrict those rights.

Considering the violence that the nation has seen in the last couple of years, specifically mass shootings and demonstrations that turned into riots, it seems clear that we need that ability to defend ourselves. That’s good reason to avoid living in those states, if you can.

⇒ Automatic Backyard Traps and Alarms for Looters and Intruders