For as long as there have been people, there’s been famine. Our hunter-gatherer ancestors developed agriculture because, although most people’s diets actually got worse when they started farming, it was easier to build up the stores needed to survive a future shortage. Famines still happened, though; bad weather, disease or pests could destroy the crops, and that usually meant starvation would follow. Famines are described in the Bible and the works of Greek and Roman historians. They regularly devastated Europe through the Middle Ages and as late as the 1840s, when blight ravaged the whole continent’s potato crop (not just Ireland’s) and killed over a million people.

What fewer people know is that famine has also reared its ugly head in the USA – and reduced some of the earliest settlers to squalor, degradation and finally cannibalism. It was an episode that threatened the whole idea of European settlement in North America; it also contains a lot of lessons for preppers. Settlement of North America by English speakers goes back to the Virginia Charter; issued by King James I in 1606, it authorized English subjects to set up colonies in a swathe of land up the East Coast from what’s now North Carolina to well into modern Canada. Would-be settlers didn’t waste much time; an expedition was quickly organized, and set sail from Plymouth on December 20 the same year. On May 13, 1607 they landed on the coast of Virginia, and established a settlement named in honor of their King – Jamestown.

The original group of settlers was small and all-male, comprising 104 men and boys. They were adventurous, confident people, determined to build a life for themselves in a vast new land. They were also almost completely unprepared, and lacking many of the skills and supplies they would need to survive long-term.

These colonists were setting out to live in a place they had never visited before and knew little about. Surely they would have made sure they could survive in the worst-case scenario of what they would find there? Well, no. They didn’t.

Virginia was unsettled, but not totally unknown. Explorers had sailed along its coast and even landed there. The Jamestown settlers knew the land was inhabited, and that led them to making some dangerous assumptions. In the end, those assumptions would destroy the colony.

The colonists had no plan to make themselves self-sufficient in food, which any prepper knows is a basic survival requirement. Instead they planned to rely on trade with the indigenous people, supplemented by some farming and occasional supply ships from England. That was a mistake. To compound it, they chose a settlement location based on how easy it was to defend. That’s an important factor in choosing a settlement, but it’s not the only factor.

Jamestown was located on a small island in the James River, separated from the mainland by a narrow channel. That channel made the island easy to defend, but it also meant there wasn’t a lot of game on it; the settlers couldn’t rely on hunting as a food source. Much of the island was also tidal wetlands, which couldn’t be farmed, and it was close enough to the sea that the water in the James River was brackish and undrinkable. As a place to build a self-sufficient settlement, it couldn’t have been much worse.

Despite its faults, though, Jamestown grew steadily for the next two years. Only 38 of the original settlers survived the first winter, but another hundred men joined them in January 1608. More arrived in October, including the colony’s first two women, and another 250 through the summer and fall of 1609. It seemed that Jamestown was a success – but that was all about to change.

Unfortunately, in August 1609 Smith was badly injured in a gunpowder explosion, probably an assassination attempt. His wounds were too severe for the colonists to treat, so in October – with winter approaching – he left for England on one of the ships that had brought more settlers. Leadership of the colony was taken over by John Ratcliffe, who didn’t have Smith’s knack of dealing with the natives, and Chief Powhatan decided to end the truce.

Chief Powhatan’s strategy was simple. He’d been observing the settlers since they arrived, and knew how precarious their food situation was, so there was an obvious way to force them to leave and get rid of the colony on his tribe’s land – starve them out.

Supply ships from England throughout 1609 had brought several hundred new colonists, but they hadn’t brought a lot of food. Most of the rations that had left England had been on a ship which separated from the supply fleet in a storm and ended up wrecked on Bermuda. Jamestown had pinned all its hopes on buying food from the Powhatan, and now that source was suddenly cut off.

To make matters even worse, a drought in the summer had wiped out almost all the crops in Jamestown’s small farms. Granaries and root cellars were virtually empty. Now, deliveries from the Powhatan stopped and the tribe began killing any settler who ventured onto the mainland to hunt. Jamestown went into the winter of 1609/10 with close to 500 residents, but stores to feed barely a tenth of that number until spring.

Most of Jamestown’s early history is well enough known; settlers kept diaries, wrote letters home and sent reports to the Virginia Company and the King. In fall of 1609, though, the historical record suddenly goes dark. There are few detailed accounts of what happened in Jamestown between Captain Smith’s departure for England on October 4 and the arrival of two ships from Bermuda on May 23, 1610. Why? Probably because nobody who lived through that winter in Jamestown wanted to talk about what they did to survive.

The accounts that do survive tell of desperate measures. A few Indians were still willing to supply small amounts of food – but only in exchange for essentials that the colonists wouldn’t normally even consider trading. In early winter, many Jamestown residents gave away the tools they needed to build, farm and work at their trades. Some even traded the weapons they needed to defend themselves. It still wasn’t enough.

For archaeologists, rubbish heaps are a gold mine of information. Plant remains and household rubbish can tell us a lot about how people lived in the past, but few things are more informative than animal bones. If your dog dies and you’re not very sentimental, you might throw its body in the trash – but you won’t joint it first. That winter, the people of Jamestown were cutting up their dogs and throwing the bones in the trash. By that point the horses had probably all been eaten, and when the dogs were gone cat and rat bones started turning up in the rubbish heaps. Unable to hunt, the colonists were eating every animal they could get their hands on. But soon the animals were all gone, too, and at that point truly horrible things began to happen in the starving settlement.

Dark rumors about the colonists’ desperation have made it into the history books. There are tales of freshly buried corpses – and there were many burials that winter – being dug up overnight and butchered for meat. A husband was supposedly burned at the stake for killing his wife and hiding her salted flesh in his house. Foraging parties came back a man short, and some of them probably weren’t killed by Indians. These were all just stories, though. Then, in 2012, proof was found that the people of Jamestown really did resort to eating each other.

Cannibalism has happened often enough in human history that archaeologists are familiar with the distinctive cut marks left on the bones of victims. When the skull, jawbone and one leg of a girl aged about 14 were found in the cellar of the old Jamestown fort, where the colonists sheltered from Indian attacks that winter, archaeologists examined the remains for clues to what killed her. What they found was gruesome – she’d been butchered with an ax or cleaver, and the flesh cut from her bones with a knife.

There’s no possibility that this luckless girl was cannibalized by the Powhatan and her remains retrieved later; while the Indians pillaged parts of the settlement, the fort was held by the colonists through the winter. The girl hadn’t been given a decent burial, either. Her remains were found mixed in with a jumble of other bones, including a horse, dogs and squirrels.

Did hungry colonists kill the girl for food, or strip away her flesh after she died of some other cause? We’ll probably never know. But, once the taboo against eating human flesh has been broken and the recently dead consumed, it’s not such a big step to start wondering which of the living could be eaten next.

The Starving Time of 1610 is a horror story from the distant past, but it contains lessons no prepper should forget. The colonists’ biggest mistake was not being self-sufficient in food. They survived for a while on outside sources, but when those sources were cut off by conflict with the Powhatan and winter storms in the Atlantic, starvation became inevitable. If you plan to survive long term, you need to ensure that you can feed yourself from sources you control and that you have reserves to keep you going if crops fail or you’re under siege for a while. Otherwise, you could end up as a footnote in some future archaeologist’s paper about 21st century cannibalism. 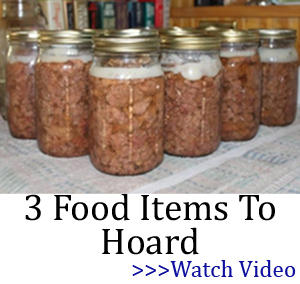 Bugs You Can Eat in a Food Crisis

What Do You Do When Someone Asks For Food in a Crisis?

Awesome Places Where You Can Hide Your Food When SHTF