Going Beyond the Bug-Out-Bag

Even people who aren’t preppers are building simple bug-out bags, prompted by information from the Department of Homeland Security (DHS). While bug-out bags vary considerably, there are some things that pretty much everyone takes for granted and includes in their BOB.

The place where bug-out bags are most likely to vary is in the area of survival equipment. Experienced survivalists are likely to include a wide variety of survival gear, as if they were planning on spending weeks or even months hiding out in the wilderness. Bags created by the uninitiated aren’t going to have all that equipment, mostly because they don’t know what to do with it all.

One thing that seems to have somehow gotten to be an iron-clad rule about bug-out bags is that they have three days of food in them. Some go farther, and add three days of water, but most just have minimal water, expecting you to find water out in the wild.

Let me ask you something. Do you really think that you will only need three days worth of food if you bug out? Maybe I’m just different, but I don’t see it that way. If things are bad enough that I have to bug out, I think I’m going to need a lot more food than that. Three days worth of food might be enough to get me to another city, but it won’t be enough to keep me alive until things return to some semblance of normal.

Granted, I can’t carry enough food with me to survive on until things get back to some semblance of normal, but three days worth isn’t enough. At an absolute minimum, I think that I should have enough food to get to my bug-out location, plus food to eat for a few days more while I am hunting in that area.

The problem is that the bug-out bag idea which the government has propagated is based on having enough to get away from home and to some sort of government run shelter. If that’s the goal, then three days might be enough. But I don’t know too many people who consider going to a government run shelter (read FEMA “concentration” camp according to Supreme Court Justice Antonin Scalia) to be an option. We’d rather strike out on our own. Unfortunately, everyone is still following that government model, even while realizing it is flawed.

Of course, there’s a problem with trying to carry more food and that is space. Enough food for three days takes up about half the space in a typical tactical backpack. If you want to carry enough food to last you a week, you’re going to need something bigger to carry it in.

Before looking at something bigger, let’s add a little more to the load. In addition to adding more food to the bug-out bag, there’s a few other things that I think should be included, but usually aren’t:

Related: How to make Hardtacks for your B.O.B.

Okay, so now what do we do? It’s clear that all this extra equipment won’t fit in a bug-out bag, especially with all the stuff that most people pack in theirs. So, what’s the answer? Obviously, we need more than just a bug-out bag. Perhaps we need to consider adding a duffel bag or two to our already bulging backpack.

There’s just one problem with this; that is the problem of what to do if you have to abandon your car. One of the basic principles of bugging out that I firmly believe in is that you can’t count on the roads. While you may be able to start your bug-out in the car, you have to be ready to abandon it at any time, when the highway turns into a parking lot.

That leaves you with the problem of what to do with your additional bag or bags. Let me clarify one thing here. All of your survival equipment and at least some of your food must be in your bug-out bag. That way, if all you can manage to grab and take with you is your bug-out bag, at least you’ll have what you need to survive. Everything that’s in the other bag or bags is extra; things you are carrying along to make it easier and more comfortable to survive.

You may end up having to abandon those other bags, along with your car. However, I believe you can avoid abandoning them, simply by making sure that you have some way of carrying them along with you. There are several ways of doing this, but the simplest I’ve seen is a one wheeled caddy for your packs, that you drag along behind you.

You can envision it this way; imagine you had a two-wheeled hand truck and strapped your duffel bags onto it; you could then drag it along behind you. Now, let’s modify that a bit; instead of two wheels, let’s go with one larger one, mounted in the middle; that will make it easier to get over rough ground. Then, let’s attach the handles of hand truck to your belt, so that the weight of the load is transferred to your legs (which are stronger than your arms). Finally, let’s extend the handles past your belt, so that your hands can hang onto it and help balance the load.

A cart of this type would make it possible to carry an additional 100 pounds or more of supplies and equipment along with you, without reducing your mobility by much. With it, it won’t matter so much if you have to abandon your car, as you will be able to carry everything with you. The additional equipment and supplies will make it much easier and more comfortable for you to survive, making it worth the extra effort.

More than anything, don’t pack your bug-out bag based upon what someone came up with, sitting in some office, somewhere. Just because somebody said “three days worth of food” that doesn’t mean you need to limit yourself to three days of food. Take what you think you need, as long as you can think of some reasonable way of carrying it. 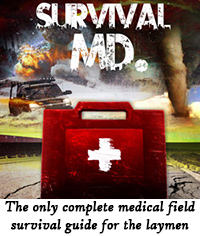