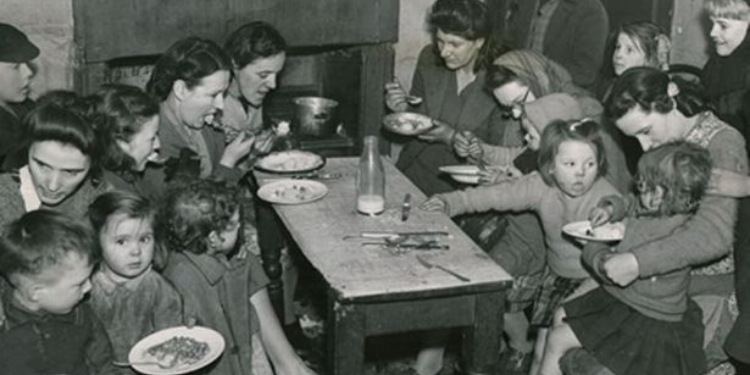 The great depression was a time of intense fear and uncertainty for America – and the world. The economy was completely destroyed. Families struggled to survive through sickness, poverty, and hunger.

Unemployment and homelessness skyrocketed. Food was scarce and finding creative ways to make meals stretch and last longer was the only way to secure steady meals for your family.

While we all have high hopes of never seeing an economic crisis of this magnitude in our lifetimes, people who lived during the great depression know to never say never. This is probably because people who survived that time didn’t think it could happen to them either.

The cost of food has increased 8.3 percent globally in the past year alone. Here in the USA, prices for groceries have risen by almost 11 percent. Seeing National food prices soar to the highest they’ve been in 40 years is enough to make anyone look for practical ways to stretch their meals further.

One of the best things we can do now is look to the past at how our ancestors stretched their food during some of the hardest times in history. If they can do it, we certainly can too.

These food-stretching strategies will give you the freedom to need less, waste less, and make more with what you have.

Reuse Cooking Liquid Instead Of Throwing It Away 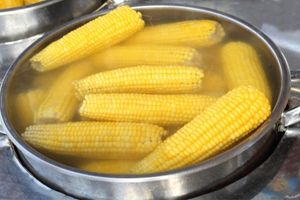 Some foods cooked in water are as good as liquid gold.

When you boil corn cobs, for example, the remaining water is full of vitamin B, folic acid, and iron.

You can use it as a soup base or for making a compost tea for your garden.

Some people enjoy the taste of corn water alone or drink it for its alleged benefits for the hair, skin, and nails. It’s even said that corn water can increase energy and fend off anemia.

Potato water is another great and reusable cooking liquid. You can use potato water to make gravy without using any other thickeners.

To do this, just add a bit of potato water to some fat or pan drippings and stir until it thickens. As you enjoy your gravy, take pride in knowing that you created something delicious from scraps most people would have thrown away.

Related: Should You Throw It Out? These Moldy Foods Are Still Edible

Corn and potato water aren’t the only cooking waters you can use though. You can also use rice water, bean water, beet water, pasta water, bones, tuna can water, and many others.

Get creative and try new things. Just be sure to use the water within a day or so to prevent the risk of fermentation. However, if you know how to safely can or ferment foods, you can add that to your food stretching skillset too.

Food preservation techniques are great skills to learn when trying to stretch your meals. 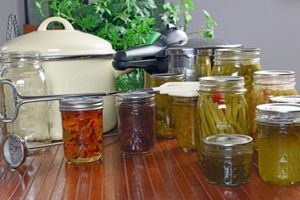 When your produce supply is starting to look a little rough around the edges, you can increase the nutrient content and lengthen its shelf life by fermenting it.

This can help keep your immune system in good shape in a time that could bring sickness and malnutrition.

During the great depression though, canning and drying foods at home was a big hit. Home-canned food kept families fed during much of this period.

⇒ Learn How To Can Hamburger Meat For Long Term Preservation

Having a good grasp on safe preservation methods like canning, fermenting, dehydrating, and drying will make you that much more prepared in the event of an economic crisis like the great depression.

Bulk Up Your Meats With Fillers 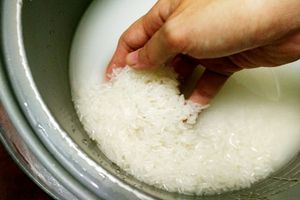 When meat is too expensive or hard to find in stores, you may need to get comfortable with needing less of it. Meat prices have risen significantly in the past year.

To stretch meat portions, mix it with foods like oats, barley, lentils, rice, beans, and vegetables to add bulk.

During the great depression, meatless loaves — made with little to no actual meat — were a very popular dish.

Some great depression-era meatless loaf recipes appear to use everything and anything they had on hand.

Popular ingredients included peanuts, carrots, beans, pickles, raisins, potatoes, spices, stale bread, and just about anything else they could find. 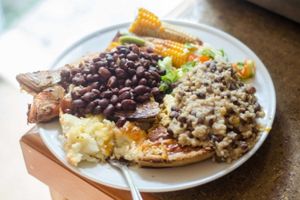 Unfortunately, learning to need less food will be one of the biggest setbacks for the modern western person if they’re ever faced with a crisis.

During troubled times it will be physically more difficult for some people to give up the three meals a day they’ve become accustomed to.

Depending on who you ask, the three-meal-per-day norm was dubbed the standard after European settlers came to America out of a desire to ritualize eating habits to separate humans from grazing animals. Other sources point to the 40-hour work week and the industrial revolution as the culprit.

At any rate, our biological, normal appetite – in other words, eating when you’re actually feeling hungry – is not only a much healthier way of living, but it may become less of a choice and more of a necessity one day.

Learning to take natural hunger cues from your body instead of training your body to feel hungry on a set schedule will help you need less and consequently, have more.

Save Bones For Later Use 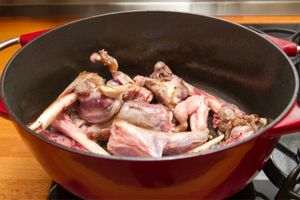 It always makes me wince a little when I see someone trimming the fat and bones only to throw them right in the trash. You can use meat animal bones to make so many different food items.

You can throw them in a pot of boiling water for a few hours to make a rich bone broth.

Once the broth cools, skim the fat layer from the top to keep for cooking. Depending on the bone type, you can even suck the marrow for a fast nutrient boost or use it as you would with butter on bread.

To preserve your bone broth, you can freeze or pressure-can it for future use. Bones kept in an airtight bag and placed in the freezer can last up to 6 months. Sometimes, you can find stock bones at your local butcher or grocery store so you don’t have to bother with freezing.

Once you’re done boiling your bones to make broth and solidified fat, you can still get even more use out of them. Grind them to make bone meal or grist for your garden and other projects. 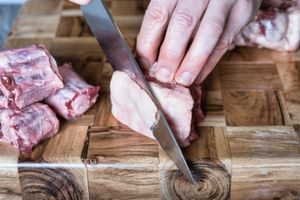 Fat trimmings are as valuable as bones, if not more so.

For example, bacon grease is arguably the easiest fat to render, but most people are missing out by throwing it away.

You can use it as you would with butter or cooking oil.

It stores nicely in the refrigerator for anywhere from 3 months to a year. For those not fond of relying on refrigeration, you can keep strained bacon grease at room temperature for up to a month. However, other rendered fats — such as tallow, lard, and ghee — can be pressure-canned for longer storage.

Some folks like to collect and freeze fat trimmings overtime. Still, unless you’re lucky enough to have an icehouse, there’s always the risk of your fat going rancid in a power outage.

To avoid this, it’s a good idea to buy cuts of meat with a lot of fat you can use all at once. You can also ask your butcher if they will save extra fat trimmings for you. They’ll likely be very happy to get rid of it.

Once you have enough, you can render the fat to make cracklings, schmaltz, pork lard, and beef tallow. You can use rendered fat in candle making, soap making, cooking, waterproofing, medicinal salves, and more.

If you don’t want to give up the health benefits of eating red meat, consider buying the cuts no one seems to want. 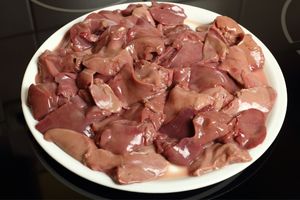 Most of the time, these are the healthier cuts with the highest protein and essential nutrient content.

For example, one serving of beef liver has over 20g of protein.

It also has high amounts of vitamins B and A, iron, copper, and phosphorous.

Traditionally, unwanted cuts get a bad reputation as they take more effort to prepare in a way that tastes good.

The history of soul food in America is one of many examples of how lesser cuts – when properly prepared and slowly cooked – are some of the most deliciously tender meats around. Knowing this, it can be argued that underrated cuts might actually have the biggest flavor potential.

Aside from beef liver, learning how to properly cook with offal meats like tongue, brain, feet, stomach, hearts, and other such foods is an underrated and valuable survival skill.

Learn To Forage Near Your Home 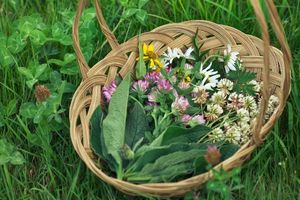 You’d be surprised how many palatable, nutritious foods are outside waiting to be harvested. The biggest problem is that most people dismiss them as weeds or think they’re unsafe to eat.

Once we take the time to learn about the edible wild plants in our area though, a whole new world opens up for us.

In the Ozarks region of the US for example, you can find wild ginger, dandelions, watercress, elderberries, leeks, mushrooms, and more by simply walking outside your front door.

In contrast, dryer regions such as the Sonoran Desert in Arizona have prickly pear fruit, nopales, amaranth, agave, and wildflowers, just to name a few. These are all freely available edible foods that most people overlook.

When you learn about safe foraging practices and learn what grows in your area, you can always find ways to supplement and bulk up your food supply.

During the Great Depression, life wasn’t easy. Yet, some people who survived chose to live the rest of their lives with the same frugality — even though the depression ended. In fact, some Great Depression era recipes are still passed down to younger generations today.

We may or may not experience similar hardships in our lifetimes, but it’s never a bad idea to work toward making what you have go further. When we learn how to stretch food like our grandmothers and great-grandmothers did, we learn how to need less and do more with what we have.

⇒ The ‘Superweed’ That Saved Large Communities During The Great Depression