As preppers, we’re all used to rotating our food supplies. When you come home from the store with five cans of soup they go to the back of the shelf, and when you decide you want soup for dinner you take a can from the front.

That keeps your food supplies as new as possible, and you should do the same with your ammunition. New bullets in, old bullets out.

What if you slip up, though? If you’re running low on ammo, and all that’s left on the shelf is a faded box of rounds you picked up when Reagan was in the White House, what should you do? Is that old ammunition still going to work – and is it even safe to try?

First, what kind of ammunition is it? If you have old factory-loaded ammo, hold on to it.

If you have old handloads that you didn’t load yourself, get rid of it. 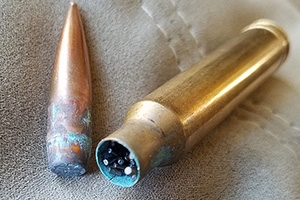 You don’t know how accurately it was charged, and firing it risks damage to your guns or even injury to you.

If you’re a reloader you can break it down and reuse the cases and bullets, otherwise take it to your local range or police for safe disposal.

It’s just not worth the risk.

On the other hand, if you have commercial ammunition you can be pretty confident every round has the right charge in it and should be safe to fire. Ammunition isn’t like food; the chemicals in it will degrade over time – everything does – but very slowly.

Ammunition that’s years, even decades, old could work as well as the day it was made.

What About Corrosive Primers?

Many shooters are worried about the primers in older ammunition.

Starting in the 1920s commercial ammo makers started switching to non-corrosive primer fillings, but anything made before that used primers that contained Potassium Chlorate and Potassium Perchlorate. These leave a residue that attracts water, and that can cause rust. 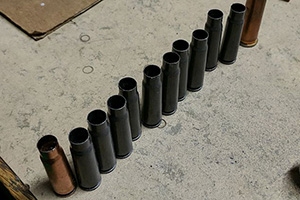 Military ammunition was made with corrosive primers for much longer, and there’s still a lot of surplus ammo on the market that uses them.

Before you reject ammo made with corrosive primers it’s worth asking why the military kept using them so long. Simple – they’re very reliable, and they’re particularly stable in long-term storage.

If you’re considering using very old ammo corrosive primers are actually a good thing, because the primers are probably still as reliable as the day they were made. As for the residue, if you clean your guns properly after firing this won’t be a problem.

The most important thing about ammunition isn’t its age or what sort of primer it has; it’s how it was stored. 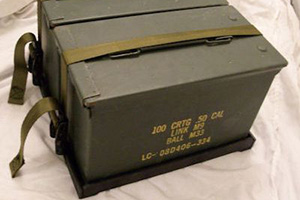 If ammo has been kept in a sealed box, protected from moisture and extreme temperature changes, it will last more or less indefinitely.

If it hasn’t been protected from moisture and temperature changes, of course, you might have some problems.

Ammunition won’t be harmed by a quick dip in water, but if it’s kept in a damp place for a while it’s going to suffer – and every component is vulnerable. Primers, propellant, cases and even bullets will all degrade in a moist environment. And any one of them can cause a failure.

You can’t really tell the condition of propellant without breaking down a round, but visually checking the outside will tell you a lot about the state of the ammo. Corroded primers are likely to be defective or unstable, and those rounds should be discarded. 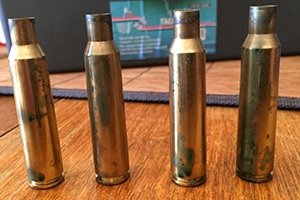 Light corrosion on brass cases isn’t always a problem, although you might get failures to feed or eject depending on how bad it is, but heavily corroded brass means you shouldn’t try firing that round.

If there are any signs of splitting or cracking on the case, discard it.

It’s vital to check the actual bullet on old ammunition. If the bullet is loose, or pushed back into the case, get rid of that round. Loose bullets are likely to cause stoppages; deep-seated ones can raise chamber pressure and cause a dangerous breech explosion.

Watch out for heavily corroded bullets too – if the corrosion is bad enough they can stick in the barrel.

Related: How Much Ammo You Need For Practice Just To Keep Your Shooting Skills In Shape

Some people worry about squibs with old ammo – where a round doesn’t have enough power to push the bullet out the muzzle, and it stays stuck in the barrel. If that happens, the next round is likely to cause a breech explosion.

Squibs are very rare, though, and when they do happen it’s usually because of careless handloading. If an old round fires at all, it’s as likely to fire properly as a new one. 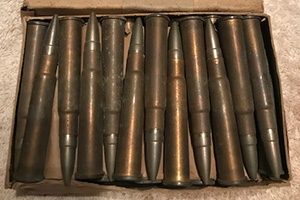 So in theory, old ammo should work fine as long as it’s been properly stored. How does that stack up to the reality?

I’ve fired .303 British ammunition that was well over 30 years old, and it worked perfectly.

The internet is full of videos of people using even older ammo. This rifleman is firing German 8mm made in 1942 – 79 years old, and as effective as ever.

Another shooter loaded his pistol with 96-year-old .45 ACP and every round fired. Even 88-year-old .22 long worked perfectly most of the time in an old revolver and a semi-auto rifle.

If you don’t know how ammo has been stored there’s always a risk of misfires with older rounds, but if it looks to be in good condition it’s definitely worth trying. Even if one round in ten fails to fire – and that’s on the high side – it’s a lot better than having no ammo at all.

Rotate your ammunition supply and keep it as fresh as possible, but if old ammo is all you have left, use it and make it count.

10+ Steps to Take Now for the Upcoming Economic Collapse