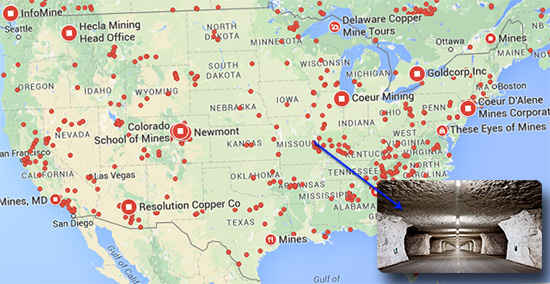 Only a handful of preppers can afford a $ 70k nuclear bunker.

But if you think about it, there are a lot of natural nuclear shelters in the US that are absolutely free.

All you need to do is to identify the closest one to your home and maybe include it into your bug out plan in case a nuclear war is looming (or an asteroid impact).

Keep in mind that these bunkers are all naturally EMP hardened. But they will protect you only from the nuclear blast and the initial radiation burst.

Sometimes the shelter is so close that is right below your feet. It’s the case in Detroit, where just 1200 Feet below there is a salt mine that can easily shelter the entire population of Detroit! Actually, it can shelter over 5 million people.

The salt mine was used to mine table salt, but with the decline in salt prices the mine is now used to mine road salt for winter.  The Michigan basin and the great lakes area (since there are also huge salt mines in Canada), used to be part of a sea which sank into the earth. The salt was left behind and formed the massive deposits that we mine today.

Detroit isn’t the only city with a salt mine below it. Other cities like Houston and Cleveland (1400 feet below) are also situated over salt mines.

So I’m going to start with… Salt mines are your best option because they are very spacious with large rooms rather than narrow, dark, high humidity tunnels like you see in mines!

From 1964-1973 the USA and CIA conducted a secret war to support the Royal Laos Government and to stop the communist incursion by dropping bombs on then communist Lagos and northern Vietnam.

Unbelievably in these years the USA dropped more bombs than any other time in the history of war. 270Million cluster bombs, 210 million more than Iraq in 1991, 1998 and 2006 COMBINED!  7 million tons of bombs, more than twice the amount dropped in Europe and Asia in WWII.  This is equal to a laneload of bombs every 8 minutes, 24 hrs. a day for 9 years.

Kaysone Phomvihane who was the leader of the communist movement led his people to limestone caves in the craggy mountains at the Vietnam boarder.  The shelter has become known as the ‘City of Victory’ and is a tourist attraction.

There is an extensive network of caves all across the USA. I have made a list of the largest ones, state by state for your reference. There are many advantages to cave living even in an emergency situation.  They tend to retain heat in the winter and are cool in the summer as well as an excellent natural hide away from natural disasters.

There was even a reference to living in limestone caves of Missouri the film “Deep Impact” when comet was to hit the earth and flood a greater part of the world.

The reality is that nature provides most things that we need to survive, so why not a cave as a refuge for war or nuclear bombs?

You might find it hard to believe, but Kansas City has a “nuclear shelter” which houses 10 percent of city’s commercial real estate.

Subtropolis – as it is called – is an ex limestone mine with an excavated size of 140 football fields, which was turned into an underground industrial park. The limestone deposits are six times stronger than concrete.

Find The Closest Mine to Your Home:

Unfortunately, there isn’t a reliable map with all US underground mines. I tried to use Google Maps but it has a lot of other facilities with the name “mines” and also surface mines. You can see it here.

But you can use a website to find the closest mine to your home. Just enter your location and make sure you’ve checked “underground” and a 50 miles radius. The results is your closest “nuclear shelter”.

If you don’t have any mines near your home, scroll down and you’ll find “mines by state”, select your state and see what mines are close to you.

Of course, a specially made nuclear bunker has food, water and oxygen reserves. These natural shelters will protect you only from the nuclear blast and the initial radiation burst.

Chances are that you won’t be warned about a nuclear blast, but (just in case) here are 3 signs that you need to take “nuclear” cover:

1 – When your electronics stop working (most of them)

Most experts agree that the next nuclear war will start with at least an EMP. If one of the nuclear powers blasts a nuclear weapon 275 miles above the US it will produce an EMP that will basically send us, the Canadian and the Mexicans back to the Dark Ages. This is exactly what our enemy wants: to disrupt our communication and our ability to retaliate at full capacity. I have something you need to watch. It’s much better than I am at explaining the threat. Watch it and learn what you should fear most (Video), what an EMP effects and how you can protect your electronics, car, mobile phones, etc. (Source)

It doesn’t matter if it’s in the US, Russia or China… I’m thinking that when a nuclear bomb explodes we face 3 possibilities: a nuclear war which may involve the US, nuclear terrorism which means that the first explosion may be followed by another four, or human error like in 1956 when the US Air Force accidentally dropped two atomic bombs on North Carolina. If it’s the last case… then yes you’ve probably evacuated in vain. But the risk worth the effort! (Source)

If you’re not killed in the first few minutes, you can live a lifetime or die of cancer in the next few days. The longer you expose yourself to radiation (in the radioactive area) the lowest the chances to survive. Take your family and leave as fast as you can! (Source)

Because an article is way too short to include info on all mines in the U.S. I suggest you use it as a starting point to find the closest location and then find more info about it.

How much does a nuclear bunker cost?

What really happens when you bury a shipping container (Video)