“For over four decades of the Cold War the world lived under the threat of nuclear annihilation. Nuclear powers spent two trillion dollars on nuclear arms; enough to make sure that there was overkill for the overkill. All this was kept “stable” by the concept of “Mutual Assured Destruction” which isn’t even good grammar, but certainly was MAD enough for anyone.” (Source)

But surely not as mad as our “terrorist enemies” who pray for Mutually Assured Destruction.

The media doesn’t talk much about this, but during the Cold War the US lost 7 nuclear bombs and now, more than ever, they are becoming a big threat to our national security.

The One we lost in the swamps – when the US Air Force accidentally dropped two atomic bombs on North Carolina (March 10, 1956)

An American B-52 went into a tailspin during a routine flight along the east coast, causing a pair of 4-megaton hydrogen bombs to dislodge and fall near the town of Goldsboro. A low-voltage safety switch was all that prevented a disaster. Had the bomb exploded, the blast would have been 265 times more powerful than the bomb detonated over Hiroshima and the fallout would have reached as far as Washington DC, Baltimore and New York City, given the strong northerly winds, after eviscerating Goldsboro and much of North Carolina.

Controversy continues to surround the event as newly declassified information reinforced public suspicions that one of the bombs came very close to detonating and one has never been found.

The bomb that was not found plunged into a muddy field. The tail of the bomb was discovered about 20 feet below ground, but the core has never been recovered since excavation was abandoned because of uncontrollable ground-water flooding.

To quote a sarcastic comedian: “OK… We nearly blown up one of the Carolinas, but that’s basically why we have two”.

A Convair B-36, carrying a Mark 4 nuclear bomb crashed in northern British Columbia. The B-36 had been en route from Alaska to Texas, on a mission that included a simulated nuclear attack on San Francisco. Seven hours into the flight, three of the six engines began shooting flames and were shut down, and the other three engines proved incapable of delivering full power.

The atomic bomb was jettisoned, the crew bailed out (parachuted) and 12 of the 17 men were eventually found alive.

It is said that the nuclear bomb blew up on impact with the water and only pieces remain on the bottom of the ocean. The bomb’s uranium components were lost and never recovered. According to the United States Air Force the plutonium core was not present for this simulation.

The two Nuclear Cores that not even The US Army knows where they are (March 10, 1956) A Boeing B-47 Stratojet took off from MacDill Air Force Base, Florida for a non-stop flight to Ben Guerir Air Base, Morocco, but mysteriously disappeared.

The unarmed aircraft was carrying two capsules of nuclear weapons material in carrying cases. Since a nuclear detonation was not possible, the nuclear cores of the bombs are probably intact even today.

Despite an extensive search, no debris were found, and the crash site has never been completely located. Aircrafts last known position was over the Mediterranean Sea.

31 days after Ticonderoga ‘s departure from U.S. Naval Base Subic Bay in the Philippines, an A-4E Skyhawk attack aircraft carrying a hydrogen bomb rolled off the deck of the U.S.S. Ticonderoga and fell into the Pacific Ocean. The plane and weapon sank in 16,000 feet of water and were never found. As to this day, the fate of the weapon has been a mystery.

The Two Lost Nuclear Bombs when the U.S.S. Scorpion Submarine mysteriously sank (22 May 1968)

The Nuclear Sub sank about 400 miles to the southwest of the Azores islands with 99 crewmen dying in the incident. In addition to the tragic loss of all 99 crew members, the Scorpion was carrying two nuclear weapons. 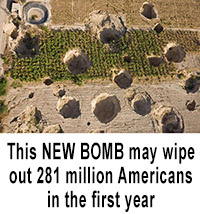 Today, the wreck of Scorpion is resting on a sandy seabed at the bottom of the Atlantic Ocean in 9,800 ft of water. The U.S. Navy periodically visits the site to conduct testing for the release of nuclear materials from the nuclear reactor and the two nuclear weapons aboard, and to determine whether the wreckage has been disturbed.

But since the site is located in international water, basically anybody can visit it.

It is true that you need some equipment to dive a probe under 9,800 ft of water, but it can be done. For example, Titanic rests under 12,500 ft of water and we managed to dive there and recover some artifacts. In fact current technology allows us to dive under 21,414 ft of water (source).

So you may ask yourself: wouldn’t that be too expensive? Not even 1% of the costs of building a nuclear bomb – plus: it’s not that easy. On Manhattan Project we spent $26 billion (plus 130.000 people working for more than 5 years). India, Pakistan and even North Korea spent huge fortunes before making their first nuclear bombs. Iran has been working on this for more than 7 years now, and still doesn’t have one. (Source)

Why don’t we get those two bombs out of there, before someone else will? Nobody seems to care about this nuclear threat that will eventually come as a BIG “surprise”.

It sounds outrageous to me that we’ve managed to simply lose some nuclear weapons and we’re doing nothing to recover them. We’ve made so many enemies… that “ignorance” becomes a problem of national security.

Most of our recent failures in the Middle East resulted from taking no stand and just letting events drift.

Ignorance is NOT bliss! This is one of the things that I’ve learned from a well-known army officer vet Steve Walker, for whom I have all the respect in the world. Watch his video and learn quite a few efficient and unconventional fast tips about protecting your family in a time of war or social chaos.