What To Do In The Upcoming US Ammunition Shortage

What To Do In The Upcoming US Ammunition Shortage

The US is facing a severe ammunition shortage. After an uncertain and chaotic year, the demand for weapons has toppled through the roof.

The major cause for this demand mostly stems from the American concern for safety after the multiple public rioting incidents.

Not to mention, the pandemic has had an immense impact on the country’s supply-chain logistics.

The presidential drama, along with the frequent rioting episodes, has caused nationwide civil unrest. People are now worried about their safety more than ever.

There’s a huge number of new gun owners than there ever was in a long time. Anyone with even the slightest concern about their family’s safety or their business will head to the gun shop.

With the authoritative bodies occupied with handling the riots and public chaos, the people feel the need to protect themselves. Thus, the ammunition sales have spiked to a significant height.

Most retail sellers have to face problems with their inventory. Some even believe that the spike in gun sales is a response to the hateful stance of the far-right conservatives.

Furthermore, because of the increased level of uncertainty surrounding the situation, gun owners are purchasing ammunition to stock and not to shoot. 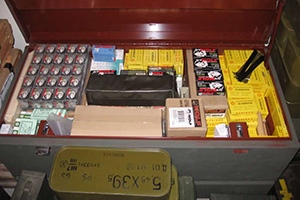 This means that there is plenty of bulk buying amongst veteran gun owners and preppers alike.

The stern belief over preparedness has intensified after the civil massacre and shootings.

Hence, the stockpiling of gun owners are making life difficult for firearm retailers.

Where Has The Ammo Gone?

Firearm retailers and wholesalers were happily enjoying their full inventory supply at the start of January 2020. No one expected their shelves to become empty by the end of the year in December.

Now, the unavailability of the ammunition is unfathomable for the consumers. The uncertainty of the pandemic, the conflicts over gun rights, presidential elections, and riots have led to the ammunition shortage.

Certainly, the ammunition manufacturers were not anticipating the rise in new gun owners and the rapid demand for gun supplies. Even hunters weigh in on the ammunition shortage. 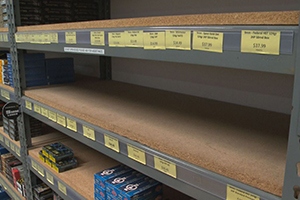 Just like people were stocking toilet papers earlier in 2020, gun owners and even hunters are hoarding down boxes of ammunition.

In these times of uncertainty, panic buying has become a common practice of the consumers.

This panic-buying practice has transferred from the likes of toilet papers to disinfectants and now to ammunition.

Keep in mind that 90 percent of the world’s ammunition market is in the US alone, and this seems to be increasing as years pass by. Therefore, the increased demand is causing hefty challenges for ammunition manufacturers to cope with, especially in pandemic times.

Gun manufacturers not only have to meet the needs of the markets but also keep their workers safe at the same time. The health and safety of the US workers will always remain the priority. 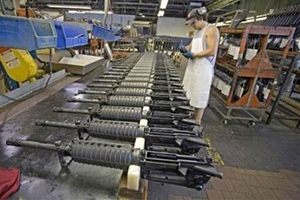 One obvious solution, i.e., increasing the number of workers, has gone out of the window due to the social distancing laws.

Manufacturers now have to make separate arrangements in their factories to accommodate more workers.

This is ultimately a time taking process, and the companies that have made the arrangement are still struggling to meet market requirements.

Apart from just the ammunition equipment, the demand for the ammunition material has also stunted. Since the pandemic is a global shutdown of the economy, there is an overseas lack of production in primer and brass.

These are two core materials for the manufacturing of ammunition. Other necessities for ammunition production are also scarce in number. These include gunpowder, cases, cardboard boxes, and packing tapes.

With the closing down of all manufacturing facilities, even small things such as the shipment and boxing of ammunition is now a challenging endeavor. Whether the sudden spike was a result of the people’s desperation or a frantic response to the civil unrest, certainly, the shortage in ammunition will not get better anytime soon. 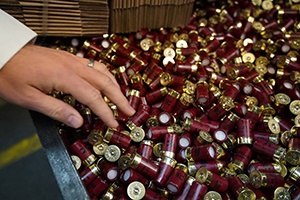 Some conspiracy theorists have hinted that the ammunition shortage is a company plan to stockpile ammunition so that they can sell it to the wealthy. However, after stern questioning, the authorities have denied any of this information to be true. The president of the Remington ammunition company had to come out and address these rumors himself.

Related: How to Practice Good Marksmanship Without Wasting Ammo

When Will The Shortage End?

Consider the fact that there are now seven million new gun owners across the nation since March 2020. If you take that number and make a conservative estimate on the ammunition requirement, it tallies up to 700 million new rounds of ammunition. Hence, it is impossible to meet this number in less than nine months.

This fact alone puts many conspiracies spiraling around this shortage to bed. The federal president confirms that production is likely to increase but only to some extent. Increasing the workforce and machinery is a time-consuming process.

Furthermore, in times of the pandemic, multiplying workers for the demands of the business is an irresponsible and inconsiderate step. 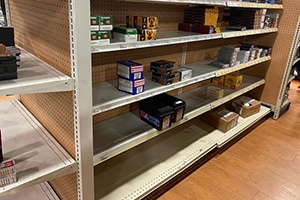 Thus, the shortage is likely to last throughout the year 2021 and maybe even longer.

The new Biden administration will also have much to do with the production of ammunition. Their important decisions regarding gun laws and legislation will influence the speed of ammunition production.

What Does This Mean For Preppers?

As a prepper that is looking to stock more ammunition, note that due to the basic laws of economics, the increased demand and decreased supply of the product are causing ammunition prices to soar.

Some bullets and cartridges have tripled in price since last year. Despite, what the reasons are for this ammunition scarcity, expect the prices to stay high until there are high demand and low supply.

However, the free market economy has a way of stabilizing itself. Expect the supply to catch up in a few months. 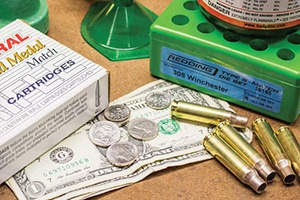 It is just a matter of patience; if you want to purchase the ammunition at a lower cost, you have to wait for the prices to drop down again.

Otherwise, you can scavenge around retail stores and spend hefty dollars on cartridges and rifle bullets.

If you are a hunter or someone looking for cartridges, you can always opt for switching to a different caliber shotgun according to the availability of the cartridges.

Consider something along the lines of .450 or 7mm Mag because the .223 Rem tends to finish up fast. Furthermore, you can even backorder ammunition and wait until April or March.

In these circumstances, patience is likely to play out in your favor. If you wait long enough for the inventories to stock up and the demand to drop, you can buy ammo for an astoundingly low price.

When companies have excess ammunition in their inventory and the demand does not pair up with the supply, they are likely to put extremely low prices on ammunition. Therefore, once the firearm hype stabilizes, it will become easier for you to stock up on ammunition because of the low prices.

Related: Frugal Prepping: How to Get Cheap and Reliable Ammo For SHTF

How Much Ammo Should You Stockpile?

It depends on how much ammunition you need. It also depends on the location of your house, whether you live in the suburbs or urban areas.

If you live in a distant location, which is safe, then you may not need ammunition for protection. However, if you are a suburb resident hunter, then you will need to stock up on cartridges. 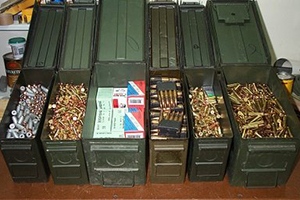 In terms of protection, if in case dire circumstances come about and require self-defense, then typically you should need about 300 rounds of ammunition at hand, per firearm. Some people believe that to be less, while others fancy even more. Another aspect that will determine your ammo requirements at hand is your strategy.

Do you plan to stay put and shelter in times of crisis? Or do you have an exit plan?

Sheltering and firing back will require more ammunition from your side. Whether it is an all-out attack or a threat, you will have to show the opposition that you are well equipped with plenty of ammunition.

On the other hand, if you plan to bug out and retreat to a safer destination, you need to travel light and carry essentials.

In the worst of scenarios, the roads will shut down. You may have to abandon your vehicle and escape on foot. In this situation, you need to have food, water, and essential survival gear. Therefore, carrying extra ammunition is not ideal.

Investing in ammunition is crucial, especially in survival situations.

You must have at least 10,000 rounds for each caliber weapon that you own. This may seem like too much, but in dire circumstances, ammunition will worth more than the most valuable of assets.

It is ideal to have your ammo and stock as much as possible, considering the increasing demand for ammunition and firearms.