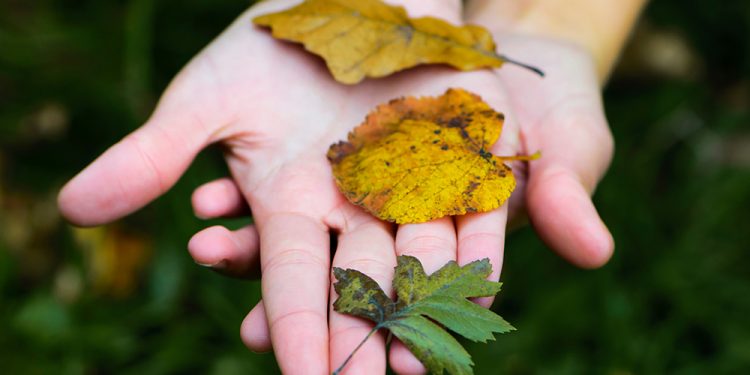 The Survival Guide to Identifying Leaves

We can identify trees by examining their leaf characteristics such as venation, shape, and margins.

These essential plants are the biggest on the planet. They make it possible for our insects, birds, and wildlife to survive. Trees reinforce the soil, prevent flooding, reduce wind speeds, store carbon dioxide, cool the air, reduce the temperature in cities, and give us oxygen.

Humans have enjoyed the berries, nuts, cultivated and wild fruits they provide, and you are probably aware that many have medicinal uses and antiseptic properties.

Did you know that you can eat the leaves, flowers, new growth, roots, pollen, seeds, twigs, and bark of some trees? Some are poisonous, but others are good for us and exceptionally tasty. Let us find out which is which.

Edible Trees in Our Forests

Apart from the delightful syrup, we can eat the seeds and young leaves of several maple trees. The young twigs and inner bark of several birch trees are digestible.

You can tap the sugary syrup. Our pines are extremely valuable and offer edible seeds, inner bark, and more to nourish us. 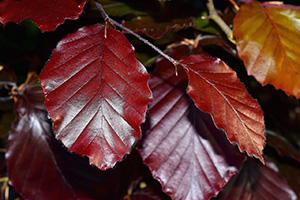 This magnificent shade tree is indigenous to eastern North America, can grow to 100 feet tall, and provides survival food.

Its smooth bark is gray, and its green leaves turn golden bronze in the fall.

You can eat the small, tasty nuts, cook its young leaves in spring, and make the inner bark into bread flour after drying and pulverizing it.

As a rule, the leaves are oblong or oval, have a pointed tip, are between three and six inches long, glossy medium to dark green, and display saw-toothed edges.

The veins on the sides run parallel to each other, towards a point. 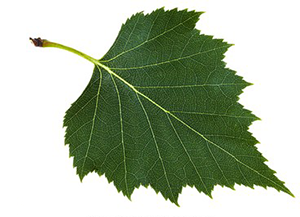 The inner bark of the picturesque birch is valuable survival food. It can keep one alive during hard times.

Pioneers and native peoples used to dry and ground the inner bark to make bread flour. You can eat it raw or cut it into slivers, cook it like noodles, and include it in stews and soups.

Boil the sap down into a reasonably sweet syrup or drink it from the tree in spring. The leaves have single or double serrated edges, are oval, and double-toothed or pointed.

Related: How To Make Fuel From Birch

The tall, well-shaped linden, also called basswood, has a dark gray, grooved trunk that can attain six feet in diameter. 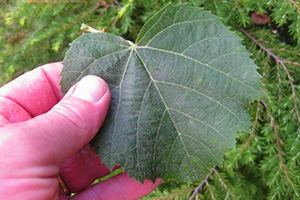 You can make the fragrant flowers into a flavorsome tea for a sore throat, cough, or cold, and eat the young spring leaves lightly cooked or raw.

Substitute the tender young leaves for garden greens in salads and sandwiches.

The mature leaves are also edible during spring, summer, and fall and are a good source of antioxidants.

Their enormous leaves are heart-shaped and measure six to eight inches across. The bark, sap, seeds, and flowers are all edible.

You can eat a maple’s young leaves, seeds, and inner bark cooked or raw. Native peoples hulled and boiled the larger kernels and leaves.

Make maple syrup from any maple tree, but sugar, silver, red, and black maple sap is sweet and provides a bracing drink in spring.

To be safe, prevent domestic animals – especially horses – from eating any part of maple trees. 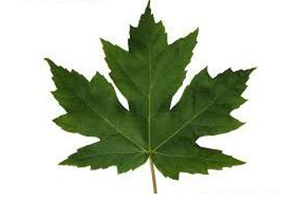 Sugar, red, and silver maple trees are toxic to horses and may impair red blood cell function in dogs and cats.

They can cause abdominal pain, lethargy, and lack of appetite. Other symptoms are a darkened mouth and eye membranes or a change in urine color.

The leaves have three distinct lobes, are faintly notched, and comprise smooth U-shaped margins between points.

Silver Maple leaves are dark green with silvery-white undersides. They have five lobes with both deep and narrow indentations between the lobes.

Black Maple leaves are dark green in summer and shallowly notched. The droopy-edged, five-lobed leaves are three to six inches long, thicker than the sugar maple’s, hairy on the lower surface, and look wilted. 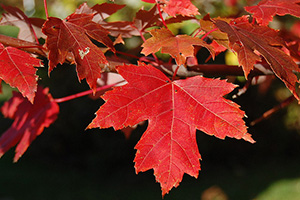 Red Maple leaves have three to five shallow lobes, roughly serrated margins in-between, and sharp points. They have almost white to pale green leaves that turn a bright orange or red in the fall.

Edible Conifers in Our Forests

The pine family (firs, hemlocks – not the poison hemlock – larches, spruces, and pines) is a vital global food source for humans and wildlife.

Sap and bark contain valuable nutrients such as vitamins A and C that fight scurvy and have prevented the starvation of many.

You can eat it raw or cut the inner bark into ribbons. Boil or dry and ground it into flour to bake bread or thicken stews and soups. Drink the sap as a tea in spring.

Young pine needles are starchy, nutrient-rich, and quite tasty. Chew them for several minutes and ingest only the juices. Consider making a tea with the needles in winter. The pollen, seeds, and cones of the Pinus genus are edible. The seeds produced by the woody cones are tasty when you shell and roast them. 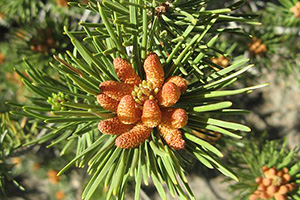 The lodgepole pine has an edibility rating of three out of five. Eat the inner bark fresh, dried, or mash it into a pulp to bake cakes.

The bark gathered in the early spring tastes agreeable, but it develops an unpalatable turpentine tang later in the year.

The dark green needles have sharp points, are often twisted in a spiral, and appear in twos.

The endangered jack pine’s leaves are pale, evergreen, and look like needles. They appear on thin branches in divergent clusters of two. The ¾ inch to 1½ inches long needles are somewhat twisted and curved.

The endangered red pine has thick, dark green tufts of bent, needle-like leaves occurring in bunches of two toward the branch tips. They are four to six inches long.

Some – But Not All – of Our Poisonous Trees

The trees below are toxic to some livestock, mammals, and humans.

They may cause death or severe symptoms such as irregular breathing, seizures, respiratory distress, and bloody diarrhea – to name a few warning signs – depending on the tree in question.

You need to identify toxic trees correctly to prevent the possibility of making a disastrous survival food choice. 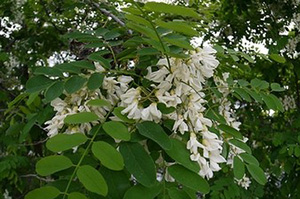 The dark green leaves separate into smaller leaflets arranged on both sides of a central stalk.

They can grow to approximately ten inches long. The small oval leaflets are roughly thumb-size.

The Chinaberry tree has large leaves – approximately 1½ feet long – that are somewhat serrated and lance-shaped.

They are dark on top and paler beneath. The flowers exude a lovely scent, but the leaves smell very bad when crushed.

The positioning of the Flowering Dogwood’s leaves is mainly opposite one another. 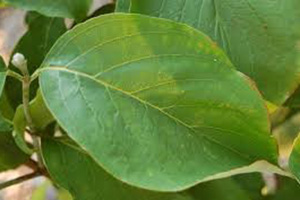 Some leaf pairs do not line up completely, indicating an opposite-sub-opposite leaf arrangement.

The green leaves have pale undersides in spring and summer that turn red and orange in the fall, though the bottoms remain pale. They have a rounded base and pointed tip.

The leaves of young Norfolk Island pine trees have a slender oval shape that narrows to a point at each end and curves upward.

Trees may display both kinds simultaneously.

You can identify the Ponderosa pine by the butterscotch or vanilla smell of its bark. Their trunks are thick, straight, and tall.

The bark is rusty-orange, scaled, and splits into large plates. Their thick, flexible, droopy, four to eight-inch long evergreen needles grow three to a bundle. 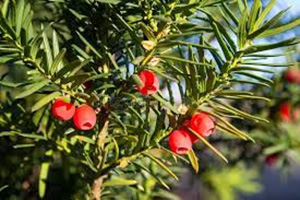 The Yew tree is an evergreen with needle-like leaves that are dark green on top and light green beneath. The leaves feel waxy and grow in two rows along a sprig. The needles have raised central veins underneath.

Beware of the Manchineel, also known as the Tree of Death. It is indigenous to coastal regions in southern North America, such as South Florida.

You will also find them in the northern parts of Central and South America and the Caribbean. Do not approach if you see one in the mangroves or on the beach.

All portions of this tree are poisonous and deadly. It is one of the most dangerous tropical genera worldwide, and even seeking shelter underneath it in the rain may have severe consequences.

Its leaves are bright green, alternate, two to four inches long, and are finely serrated. Their fruit looks like a green or yellowish-green apple when ripe.

Just as there are considerably more poisonous plants in the wild, there are many more edible leaves, fruits, bark types, and flowers we can consume.

Consider the hawthorn, sassafras, mulberry, willow, and rose of Sharon, among a range of other possibilities.

Why not try out some of these suggestions at home and test what you can do with the food you can find in your gardens, parks, and forests? 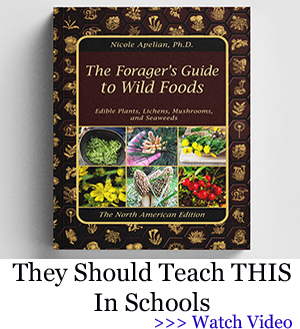 I Asked a Friend What I Should Stockpile for SHTF: The Great .223 Remington Or The Stalwart .308 Winchester?