Puerto Rico: This Is What Living in a 6 Month-Blackout Looks Like

Puerto Rico: This Is What Living in a 6 Month-Blackout Looks Like

On the night of September 20th 2017, a Category 5 hurricane slammed ashore the Puerto Rican islands. A torrent of Hellish 155-mph winds and biblical sea waters razed the island’s infrastructure in a matter of hours, twisting power line and sweeping away entire blocks of homes.

Overnight hurricane Maria transformed a once-modern and popular tourist destination into an excerpt from the dark ages. This is what it was like to live in Puerto Rico for six months without any power.

A Complete Loss of Infrastructure or Communication

Pitch-black nights, cold and scarce meals, and complete isolation only begin to describe the terror Puerto Rico’s residents suffered for over half a year. The entire island suffered a six-month-long infrastructure failure in the wake of Maria, leading to over 1 million residents being left without any electricity.

Related: 14 Things to Stockpile for the Next Hurricane 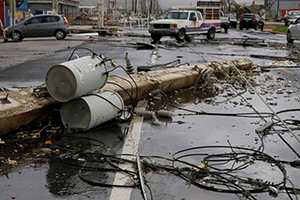 With over 90% of cell towers still inoperable, many weeks after the storm hit, desperation began to sink in. Mothers tried to phone their missing children. Husbands and wives were separated, with no way of knowing if the other had survived.

Children searched desperately for missing parents who stowed them away from the storm waters before disappearing. And with no central infrastructure connecting rescue operations, first responders and local police were unable to coordinate operations.

The only hope of emergency communications was found in preppers and amateur radio operators. Armed with walkie-talkies and HAM radios, it was private citizens relaying critical messages and assisting police and medical personnel in rescue operations that ultimately led to some measure of relief. But that relief was isolated, an exception and not the norm.

Telecommunications companies like T-Mobile painted dire pictures of the work to come. With so much damage and debris littering the island, repairs to infrastructure came slow. The lack of fuel meant crews couldn’t travel to remote locations where power lines were down – and even if they had fuel, the obstacles that lay in their way meant linemen and engineers had to battle tree branches, razed buildings and other dangers mile by mile. The work was slow, grueling, and often went for days at a time.

As a prepper, Maria illustrated for me the critical need to invest in emergency communications and reliable methods of hailing rescue or reaching family that doesn’t rely on public infrastructure. Amateur radio units are affordable and while operating one normally requires a license, emergency situations like Maria provide exceptions to those affected. Although more expensive, satellite phones have become affordable enough for the private user, too. 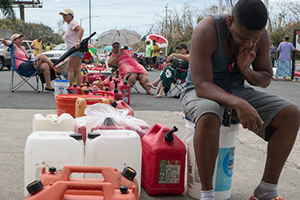 Some locals were lucky enough to get their hands on gas-powered electric generators, though their investments provided little relief from the blackout.

Some families reported getting in line for gasoline at a fill station at 3:00AM, only to be left waiting with no indication of supply nearly twelve hours later.

But the problem wasn’t an outright shortage of gasoline. Because the blackout killed communication between fuel distributors and drivers, the fill stations waited eagerly for resupply with no indication of when relief would come. With fill station managers left wondering, residents who needed gasoline had to gamble on waiting for days at a time. Many brought tents, pillows and blankets, making makeshift camps while they waited for fuel with nowhere else to go.

As days and weeks dragged on with no sign of the power coming back whole, the suburbs and villages dotting Puerto Rico’s hills and valleys became scattered with makeshift (often dangerous) micro-power grids. Long orange extension cables were wrapped around fences and through windows. The hum and patter of gas and diesel engines filled every nook and street corner. Officials and electrical engineers pleaded with residents to mind their safety, providing instructions on how to power numerous homes with a single generator.

Related: How to Tell in 5 Minutes if it’s a Power Outage or an EMP and Get a Massive Head Start

Not all families and communities were lucky. Many families were forced to eat by candlelight and suffer isolated nights without electricity. Their near-misses in the storm didn’t spare them of the same fate most other residents suffered. It took ten months for some to get power back.

Although families had generators, the petrol prices and shortages meant most could barely afford to turn them on. On certain evenings they’d power on the TV to watch a single DVD. On other nights, they’d spend a few precious ounces of gas for a few hours to get the washing machine spinning.

Life became a dark game of treating basic amenities as precious commodities. They ate cold, unprepared food from tins and spent their days wrestling large bags of ice up the mountainside to be stored in picnic coolers, working tirelessly to preserve any perishable food they could find.

The long months without power also created dangerous medical complications for those suffering medical ailments. Two people who were on life support in a hospital died because its generators ran out of diesel fuel.

I find the need to supply power for medical reasons to be one of the most important factors to consider. A simple wind generator, hydroelectric station, or deep-cycle batteries with a manual charger could mean the difference between life and death.

Related: How to Make Your Own Wind Turbine 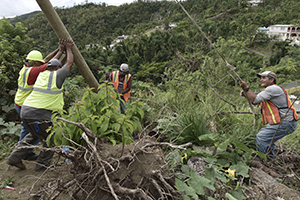 In the hillsides, ragged crews of linesmen were battling extensive overgrowth, debris, and fallen trees to restore power to households.

Working out of an aging service truck and a re-purposed 1978 Jeep, the crew remarked how they kept having to return to previously serviced areas to restore power a second or third time. Battling fire ants, shoulder-high grass and debris, the crew lamented how falling trees would knock out their work completed earlier in the week, forcing them to return.

The federal Stafford Act dictates that agencies like FEMA and the Army Corps are only allowed to restore infrastructure exactly as it was before a disaster. In some cases, materials used in Puerto Rico were so outdated that the Corps had to get them specially made for the island, furthering delays.

Many people accused Puerto Rico’s sole utility company, PREPA, of being corrupt and wasteful, too. Before the storm, PREPA was bankrupt and held $72 billion of public debt – the biggest share in the country. It relied heavily on imported oil to produce electrical power in its four-decade-old power plants and it cut corners on important maintenance and grid repairs to save cash, exacerbating the issues post-Maria.

When the company approached Whitefish – a small Montana-based electrical firm – for the island’s repairs, the negotiated contract came under scrutiny and was later canceled. The inexperienced firm signed on to receive a $300 million pay-out with provision to receive more than double the regular wages for utility crew line works.

The company struggled to get equipment to the island, overcharged PREPA for its subcontracted repair labor (some workers were to be paid $319 an hour), and allegedly bribed PREPA’s contracting officer, Ramon Caldas, with personal goods, generators, water, and food. FEMA later reported the contract was missing more than a dozen required provisions.

How a Hurricane Maria Would Affect the U.S.

The United States’ infrastructure is better suited for handling the intense winds, floods, and storm surges that Hurricane Maria brought to Puerto Rico. But it is not without its own concerns and recent examples of inadequacy. When Hurricane Michael washed ashore the Carolinas, it became one of the ten most costly storms the U.S. had ever seen. Meanwhile, Hurricane Harvey racked up over $75 billion in economic losses.

Citing existing systems’ inability to cope with the unusually intense storms the country sees today – and those yet to come – state officials recorded 28 wastewater facilities and 40 hospitals in North Carolina whose operations were totally disrupted. Officials also cite the economic and logistical challenges of rebuilding aging and decades-old bridges, roads, electrical grids, and energy networks with new technology and standards meant to bolster the ability to withstand such storms.

And while the U.S is better equipped to respond to large-scale storm damage quickly, the effects of big hurricanes like Harvey, Maria, and Irma have been shown to cause interruptions on a similar scale to Puerto Rico. In Florida, seven million residents went without broadband coverage. In Corpus Christi, more than 75% of all cell towers were destroyed. Even with disruptions of this scale lasting just days, the risks of injury, contamination and illness, and lack of food and water quickly become real threats.

For all the preppers out there, let the recent story of Puerto Rico and Hurricane Maria be a stark reminder that prepping is the key to surviving.

Author bio: Travis Noonan is a military veteran and contributing writer. His writing covers topics related to prepping, off-grid survival, and gunsmithing. In his spare time, Travis teaches shooters how to build AR-15s from scratch using an 80% lower receiver.

When Grocery Stores Go Empty; A Back Door Shopping Strategy