How To Make Pepper Spray

How To Make Pepper Spray

Even though pepper spray has been around for a long time, I have never bought any. One of the reasons is because I’m a little unsure of all the ingredients, even though they are listed…or, supposed to be listed on the container. Even if the list is accurate, it rarely gives the amount of each added item. And, do we really want to be exposed to anything potentially harmful that lists things with 3 or more syllables?

Regardless of what you would like to use a pepper spray for, making your own at home is quite easy. Sure, there are a few complicated recipes you could find. But, you can have it made relatively quickly, inexpensively, and with the exact ingredients you prefer. In other words, you can customize your own pepper spray to the strength you prefer.

Pepper spray is often thought of as a self-defense tool, and it is. It’s effective and easy to carry wherever you go. A small amount of a potent spray can help you get out of a dangerous situation. The key would be to make sure it’s potent. The hotter the peppers you use, the better. Another important tip when making it for self-defense is to store it in a small bottle that can shoot a long distance. When using it for self-defense, it would be far better to be able to reach the attacker before they could reach you. This might take some time in finding the right container. But, they do exist.

Or, maybe you want a less potent batch, one just strong enough to shoo away unwanted guests in the garden. If so, you wouldn’t necessarily need a sprayer that reaches long distances. Something such as an empty window cleaner bottle would work just fine. And, it wouldn’t matter how big or small the bottle is, because you wouldn’t have to carry it with you.

So, what about the peppers?

Related: Make Your Own Peppermint Oil – The Best Insect Repellent

If you like spicy foods, then you might be familiar with the Scoville scale, which measures the heat index of various peppers based on heat units. The higher the heat unit number, the hotter the pepper is. Here is an example:

If you are thinking of a pepper spray for self-defense, use a more fiery pepper, such as the habanero or hotter. Cayenne could work as an irritant, but probably not enough to stop the person for very long. So, you would have to be quick in your getaway. The stronger the pepper, the longer it should incapacitate the assailant. And, to add yet another layer to slowing the attacker down, add some black pepper to stimulate coughing.

However, please keep in mind that a pepper spray will have the same effect on an innocent person as it does an assailant. So, be careful where you store the spray, as well as how it’s handled.

For getting rid of the garden nibblers, something as low on the Scoville Scale as the jalapeno could work. You can also combine peppers to make your own strength.

I’m going to make a batch with a mix of cayenne and habanero. I don’t want the heat to be too high, because I will use it primarily to protect the plants. However, with a little bit of added habanero, I will add a little to a smaller spritzer that I can carry for self-protection.

The hotter the pepper you use, the more important using gloves, masks, and goggles becomes. I’m not going to be using anything excruciating, so I will just wear gloves and my glasses.

Here is a complete list of supplies you should have on hand for the recipe I am going to make:

That list of supplies might make it seem as though the process is complicated. But I assure you, it’s not.

Related: I Used To Cut This Plant…Until I Saw This!

The Recipe for an Easy Homemade Pepper Spray

Can’t stress this enough…if you are working with fresh peppers at 10,000 level on the Scoville Scale, make sure to wear gloves. If it’s hotter than that, add glasses or goggles. And, make sure to not rub or go near your eyes until the gloves are off and hands are washed.

#2. Chop fresh peppers (make sure to wear gloves), and add to the cayenne

#3. Add 1 tablespoon vegetable oil (optional, but will help the spray to adhere to the target)

#5. Add enough water so that all the pepper and seeds are fully immersed.

#6. Pour (using the funnel) the content into your spray bottle

#7. Let the content in the bottle sit for a few hours, up to a week (shaking occasionally) 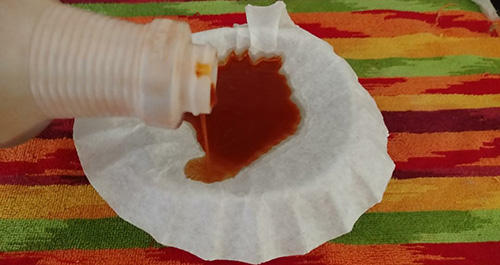 #9. Place the mix back into the spray bottle…and you have homemade pepper spray!

#10. Spraying the plants to protect them 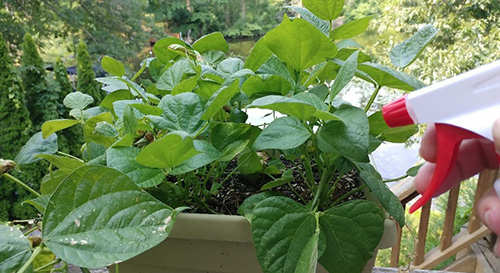 #11. A little leftover for self-protection

After taking out a little for my personal pepper spray, I added a little water to the mix because it doesn’t need to be quite as strong for plant, and I wanted it to go a little further. But, in concentrated form, this could help you get out of a bad situation. Just aim for the eyes…their eyes!

Why You Should Put Peppers In Your Socks

What Happens When You Pour Salt Into A Cabbage (Video)

How To Prepare Your House Against Looters

5 Ways Prepping Has Helped With My Retirement