How to Make Bannock the Survival Food Rich in Vitamin C

How to Make Bannock the Survival Food Rich in Vitamin C

While retail shelves and online retailers have stock that is full of designer hiking and camping foods, there are those that can be made at home and that have stood the test of time. Nowadays the sugary, over priced granola bars have taken the forefront of hiking and survival food everywhere.

This is sad. We don’t need someone else to make our shelf stable camping foods for us. The recipes are easy and the methods so primitive that they may can be cooked right on rocks. Such is the case for the Bannock that we will discuss in this article. It is a powerful survival food to add to your repertoire.

Cited as far back as the 8th century “bannuc” was a leavened bread that was made with oats or wheat flour and formed into a bread that was then cooked, in that time, on a hot stone. This stone would be set right in the fire and the bannock would be “baked” on the hot stone and in the heat of the fire.

Upon completion the bannock was often cut into wedges to feed more than one person. These wedges were referred to as scones but taste much different than its glazed counterpart south of Scotland. It was long used as a survival food and a food that could be taken on long ventures without being concerned with it spoiling.

There is a bit of a debate about how Bannock made its way to North America. Some historians believe that the native peoples were making a similar style food using corn flour. Others believe it was brought here by the Scots and adopted by the natives and people of Canada. Either way, it was an early survival food that helped both cultures get by.

In the latter part of the 1800’s the Selkirk Bannock was created, and this featured dried raisins and resembled something similar to the modern-day fruitcake. With the inclusion of dried fruits, you can create the simple bannock and boost the levels of Vitamin C. This creates a survival food that is rich in Vitamin C and all the benefits that go along with it.

Before we get started I wanted to give you a little hack for making your own buttermilk at home. Some people think they have to go and buy buttermilk, but it is not necessary. The recipe is also great with regular milk.

Merely pour one cup of whole milk and add about a tablespoon of lemon juice or vinegar to the milk.

#1. You will start with your dry ingredients, this is the flour, salt, baking powder and sugar. These ingredients need to be added to a large mixing bowl and whisk to combine.

After this I prepped the dried fruit by lining it up and slicing it down a bit. After I made the recipe I thought about cutting the fruit even smaller. You can go either way here. I imagine that on the trail a substantial piece of fruit will be more satisfying than a more eye appealing mince of fruit.

At this point you want to add your butter milk and mix until it becomes stodgy. From here you are going to add your fruit and turn that into the mix as well. Do not over mix. You are essentially making a big biscuit and you never want to overmix this type of dough or it will become hard and tough.

#2. I used a conventional oven to prepare this bannock, but I did it on a “stane” or stone that I use to cook things like pizza and other breads. That is the traditional method for cooking bannock. Ideally you could take this dough mix and place it on a stone that could be heated on over the fire and surround the bannock with fire.

If you cook on stones beware, river stones that could have high moisture content can explode if heated. Its scary and not fun. Just make sure you are cooking on a dense, dry stone.

In a preheated oven I cooked the bannock for about 20 minutes until browned. If I were cooking this on a fire I would flip it after about 10 minutes depending on how big the fire was.

#3. Always rest baked goods when the are finished cooking. The internal temperature is still rising and the cooking process is still going on.

#4. Cut your bannock up in wedges and serve it or keep it whole while you travel.

Integrating Bannock as a Survival Food

Bannock could become part of your pre-camp ritual. I see it as a way to prepare for hiking. You can cook and cool the bannock before your next trip and have it to call on when you are hiking.

By using dry milk, instead of buttermilk, you can also pack all the ingredients to make Bannock and just use water to make the dough. This is a great method for cooking bannock at the campsite, over the fire. This allows you to change bannock from being a trail food to something that you can whip up at the end of a hike.

Because of the dried fruits that are mixed into the bannock you are not only going to have a survival food that will offer you carbohydrates, but you will get a dose of Vitamin C to keep your immune system boosted. This is a benefit that things like hardtack and even jerky cannot offer you.

As far as shelf life is concerned, as long as you keep it covered, you will get weeks out of your bannock. Depending on how queasy you are about mold you can get even more time out of it! In a survival situation just slice the mold off this effective survival food. 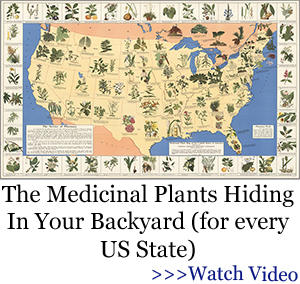 10 Things Native Americans Carried With Them to Survive (Video)

Top 10 Foods to Grow for Survival