Storing food is a big part of prepping. Even if you have the land and resources to grow your own crops you need to assume the worst-case scenario of losing everything you’ve planted, and that means having enough food stockpiled to last until you can grow some more. In a nuclear scenario you’re going to have to spend weeks in a bunker, and you can’t nip out to pick some corn whenever you get hungry. A storm could flatten your crops, or hungry refugees could plunder them while you’re asleep. If you don’t have a large store of food, you’re not truly prepared.

The trouble is, storing food isn’t easy. Since the first farmers began producing surplus crops about 10,000 years ago, preserving food for future use has been one of humanity’s biggest challenges – and the consequences of getting it wrong are serious. If you’re lucky a mistake means wasted food; if you’re not it can mean potentially lethal food poisoning. It’s vital to store the right food and look after it properly.

Unfortunately there’s a lot of advice on the internet that looks good but isn’t going to help you survive. A lot of people could be building up food stores that, when the SHTF, aren’t going to be the asset they thought they would be. To help you avoid dangerous errors, here are the eight worst food storage myths:

#1. All I need is freeze-dried food

Freeze-dried meals, whether it’s individual camping rations like Mountain House or one of the bulk emergency food buckets you can easily find online, are great. They’re simple to prepare – just add hot water – and pack in a lot of energy and nutrition for their bulk. Most of them taste pretty acceptable, too.

On the other hand, you don’t want to be eating nothing else but freeze-dried food for a long period of time. For a start, they’re highly processed and contain a lot of preservatives to give them their long shelf life. They also need a lot of water to prepare. The food itself might not be bulky and heavy, but the amount of water needed to turn it into meals is.

Your food store should definitely contain some freeze-dried food; it’s ideal to grab and take with you if you have to bug out. A week’s worth is plenty, though. Don’t rely on it for the bulk of your survival diet.

Related: 50 Foods to Dehydrate for Your Stockpile

Canned food is another popular item to store, and again it’s a very good choice. Canned food lasts for years, it’s usually pretty versatile, and it isn’t expensive; you can pick it up cheaply in any discount grocery store. Most preppers have a large quantity of canned food in store. But is it all you need? No, it isn’t.

Modern canning methods preserve a lot of nutrients, but not all of them. Canned food is often low in Vitamin C, which doesn’t react well to heat treatment. As the cans get older they tend to lose more nutritional value, and the taste and texture can deteriorate too.

Related: 22 Cans You Can Purchase for $1 or Under

The best use for canned food is to build up a stock of basic ingredients that can be eaten cold if necessary, or used as the base for a proper cooked meal. Go for canned vegetables and meat rather than complete meals – they can be combined to add more variety. A can of ravioli will always be ravioli, but canned beef stew, corn, peas and beans can be turned into many different meals.

So if freeze-dried and canned meals aren’t a complete solution, how about going back to basics and stockpiling a ton of wheat? After all it’s one of the oldest storable foods, and with a bit of work it can be turned into many things – including that classic staple, bread.

Adding some wheat to your stockpile certainly makes sense – if you have the skills and equipment to process it. Unfortunately a lot of people don’t. It’s also not ideal if you’re forced to survive in extreme circumstances, like in your bunker after a nuclear attack. Even if you have the equipment to grind wheat in your bunker, it’s going to fill the place with dust. That isn’t just unpleasant; it’s dangerous. A single spark could be enough to ignite the dust and set off an explosion powerful enough to destroy your bunker and everything – and everyone – in it.

Store some wheat in rodent-proof containers so that, when you can grind it, you can make bread and other flour-based foods. Don’t rely on it as a major part of your diet, though.

Dried beans are a common staple in prepper stores, for a whole variety of good reasons. They’re robust, less vulnerable to rodents and other pests than wheat or flour, can be used in a wide variety of recipes, and are a good source of energy and protein. Many people also believe they’ll last pretty much forever.

Well, not quite. Beans do last for a very long time, but eventually they’ll get so dry that it takes some real determination to turn them back into usable food. Even canned ones can get hard enough to need some time in a pressure cooker. If you don’t have a pressure cooker try simmering them for three hours with a teaspoon of baking soda added for every three cups of water.

Related: 50 Days of ‘Survival’ Calories with Rice and Beans

Once you’ve decided how much food you need, and stockpiled it, you can relax. Right? No, not so fast. Just having the food isn’t enough; you also need to maintain your store and make sure you have everything you need to turn it into nutritious meals.

Food supplies need to be inspected regularly to make sure nothing is deteriorating. Check packaging – especially cans – for damage or signs of pests. Rotate canned goods when you buy groceries; if you buy canned corn, add it to your stockpile and take the oldest cans from there to use. That way you’ll know the oldest food is fine, while replacing it with new.

You also need to know what you’re going to do with the food. Can it be used to prepare recipes that you and your family will actually like? Is anyone allergic to any of the ingredients? Can it be easily prepared with the utensils and facilities you’ll have available after the SHTF? Don’t just buy whatever food is the cheapest; have a plan for post-apocalypse meals.

#6. I can store my food supply anywhere

It’s tempting to stuff any odd corner with extra food, but it might not contribute a lot to your reserves in the long run. Even long-life food needs to be properly stored. High temperatures will degrade texture, taste and nutritional value. Freezing conditions can burst containers. Cans will rust in the damp.

If you do find rusted cans among your supplies they need to be checked. If the rust can be wiped off to show sound metal underneath, the can should be fine. Heavier rust could mean tiny holes have opened up, allowing air into the can and setting the scene for a dangerous bout of food poisoning – throw it away.

#7. I know how long my food will last; the expiry date is printed on it

Pretty much all food now comes with an expiry date printed on the packaging, and most people take that as a reliable indicator of how long it can be safely stored. If you’re new to prepping and starting to build up a food reserve it’s natural to look at the expiry dates and pick food with the longest ones to stockpile.

The problem is that the expiry dates are only a very rough guide. They’re usually very conservative, so food that’s long past the expiry date is still safe to eat. On the other hand they’re also based on the food being stored in ideal conditions. If it’s exposed to temperature changes, moisture, sunlight or pests it can deteriorate a lot faster.

Food that’s past its expiry date won’t usually become dangerous unless air is getting into the packaging, but it can lose taste and texture as well as becoming less nutritious. Always store food in the best conditions you can – a well ventilated root cellar is perfect.

#8. It’s emergency food; It doesn’t matter how it tastes

If you’re hungry enough you’ll eat pretty much anything. Even the pickiest eater will start to shed their preferences as the rumbling from their stomach gets louder. It’s possible to take this too far though. Food that nobody likes might deliver essential energy and nutrients, but it isn’t going to do a lot for morale – and when you’re in a life or death situation, morale has a huge influence on whether you make it or not.

It might be tempting to pick up a load of food that you’re not too keen on if it comes at a tempting price. Don’t jump in, though. Think about how you’ll feel when you’re eating it for the tenth day in a row. The point of your food stockpile is to keep you healthy and well-motivated, so make sure it can provide meals you really want to eat. 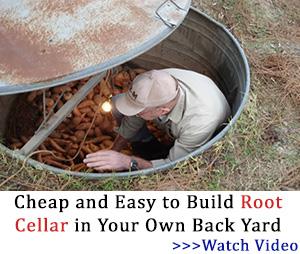 10 Foods The Cowboys Carried With Them On Long Journeys (Video)