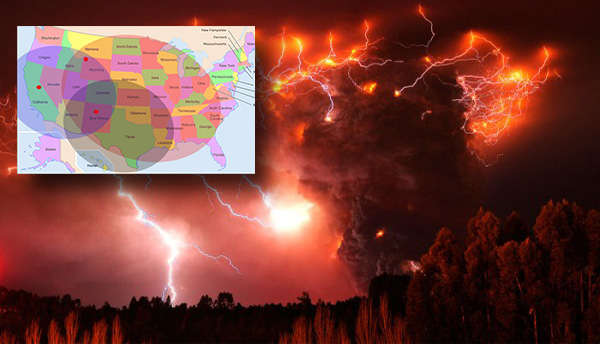 The 3 US Super Volcanoes That Can Destroy the World as we Know it!

When one of these 3 volcanoes erupts there will be total chaos. Some experts even say that the US will become a large ash desert with no one left alive.

Third – compete anarchy.  Social breakdown.  At this point it would be every man and woman and child for themselves.

Half a year long night! Survivors? Probably a handful of people!

What are the 3 Super-volcanoes in US that can absolutely wreak havoc if they were to erupt?

Last eruption was 2400 times larger than the eruption of Mount St. Helens.

If Yellowstone were to erupt, it would trigger most of the active volcanoes in the world and a “storm” of earthquakes.

The countdown for an eruption begins when there is evidence of magma moving into the crust. When this happens, scientists will know through instruments detecting precursors like earthquake swarms.

Scientists now believe that the magma in the Yellowstone’s super volcano may be vaster than previously thought.  An eruption under Yellowstone would cover almost the entire U.S. and it will cripple the whole Air travel.

But the worst part is that the world’s food system will collapse. Without out crops the entire planet won’t be able to feed 7 billion people.

Last eruption was 1500 times larger than the eruption of Mount St. Helens. This Volcano is second only to the previously mentioned Yellowstone and also packs a punch!

It is located in California, south of Mono Lake and close to the state line of California and Nevada.  The last eruption (760,000 year ago) had 1500 times the lava and ash of Mount St. Helens eruption. The eruption left an oval-shaped caldera 10 miles wide and 20 miles long.

In some ways this volcano is more worrying to geologists.  Why?  Because due to a lot of seismic activity and earthquakes in the 80’s in the area, there was an elevation of 10 or so inches of 100 square miles of the Long Valley Caldara floor.  There was also a large amount of CO2 gas that surfaced and killed a large amount of the trees in the area.

These signs tell us that the volcano is in ‘motion’ and that an eruption could be sooner than later. Because of the inside activity, in 2006 they closed the creek for swimming.

Last eruption was 1500 times larger than the eruption of Mount St. Helens.

This volcano is approximately 175 square miles and its highest point is 11,253 feet.  It is located in the Jemez Mountains of New Mexico and has many grass valleys.  Geologists say that the formation of this Caldera is due to the tectonic plates that are pulling apart in the region.

It erupted 1.2 million and 1.6 million years ago and ejected 150 cubic miles of ash and rock. It’s the smallest super volcano, but capable of erupting enough volcanic ash to make living extremely difficult.

The Last Prophecy that is Encrypted Inside our Holy Bible (Video)