Things that will Survive an EMP

7 Things That Will Survive an EMP

Of all the potential disaster threats we face today, an attack by EMP is probably one of the scariest. Properly carried out, an EMP has the potential of sending our lifestyle back by about 100 years, forcing us to live much as our great-grandparents did. The loss of electrical power would turn most of the appliances into useless junk, while the infrastructure we all depend on would suddenly come to a grinding halt.

According to the report of the EMP commission, 90 percent of Americans would die within the first year after an EMP that was set off high enough to cause a coast-to-coast impact. While the earlier deaths would be mostly attributed to people who didn’t have access to the medicine they need, the vast majority would die of starvation. With transportation down, the supply chains would stop, preventing food from being delivered from the farmer to the supermarket. And all perishables would rott in a matter of days.

The problem is that an EMP specifically attacks solid-state electronics. That means that every single item that functions due to an electronic circuit will stop working, with a few exceptions. The electrical grid would go down first. Nobody knows for sure how much it will take to replace all transformers and capacitors if other countries help, but a time-frame of 10-20 months is not far-fetched.

An EMP hits electronics with a two-stage attack.

The second wave of the attack comes through the electrical grid. The electromagnetic pulse will be attracted to the wires crisscrossing the country. This pulse will race down the wires with the speed of light, just like any other massive voltage spike. Most surge protectors won’t do any good, as they are designed for the slower pulse of a lightning strike.

Most electronic devices will be destroyed. However, there are some things that will survive.

The common understanding is that cars manufactured after 1990 will stop working instantly. Others say that cars will only be slightly damaged and will easily restart. The EMP Comission performed a test on 37 cars and in laboratory conditions, the cars stopped and restarted. However, the latest fabrication year for the tested cars was 2002. The EMP Commission states that “since 2002, the number of microprocessors in cars and the reliance on microprocessors in all motor vehicles has increased greatly.  Also, the sensitivity of the electronic circuitry to EMP has increased due to the use of smaller electronic components designed to operate on lower voltages.”

As the number of old cars in use is pretty small, we can expect to have blocked roads and highways and severe traffic jam. It’s enough to permanently damage 40%-60% (some sources say even 15%) of cars to block cities, highways and supply lines. Another problem will be in fueling the remaining cars, as the vast majority of fuel is buried in underground tanks. Without working pumps, it can’t be pumped out. Refineries, as well, will stop working without electrical power. Surprisingly enough, solar panels can weather an EMP fairly well. They do suffer some damage, reducing their output by about five percent, but they will still work. Since solar power systems are typically designed to provide more power than needed, to account for cloudy days, those who have solar panels on their homes will still have some electrical power for a while, even though it will be somewhat lower.

The problem is that the solar charge controller used to charge the batteries and the voltage inverter that converts the battery power to 120 volts AC, will probably be destroyed by the EMP. So, unless the owner of the solar system has the foresight to store spare parts in a Faraday Cage, their working solar panels won’t do them much good. The best advice would be to keep an invertor in a Faraday cage and change the damaged one.

Related: How to Build Your Own Solar Panels Simple electrical devices, such as appliances, power tools and wind generators will probably work, as long as they don’t have solid-state electronic controls. The solid state controls would be destroyed by the EMP, but the motors and valves would probably still work. This would depend, in part, on the location of the device and how directly overhead the EMP exploded. Equipment located directly below the explosion would take a harder hit, meaning that these devices may not work.

However, appliances connected to the electric grid have a good chance to get fried. And of course, their ability to function will be limited by the availability of electrical power to run them. There is a possibility that battery operated electronic devices, such as cell phones, would survive the EMP, especially if they were in metal roofed or concrete buildings. These devices would not be connected to the electrical grid and the roofs of the buildings would act to shield them from the direct assault of the EMP. As long as they weren’t connected to a charger, which would connect them to the electrical grid, they should survive.

However, this wouldn’t be very helpful: telecommunication antennas will be fried so signal (on any kind) will be dead. A Faraday Cage is any metal container which is totally enclosed. Being made of metal, it effectively blocks the passage of radio waves. As long as the cage is totally enclosed and the electronic devices inside are not in direct contact with the metal, they are protected from an EMP.

Some have said that an EMP can be made of screening or chicken wire and it would be just as effective. While a Faraday Cage of this sort is useful to block out electronic spying, it is unsure whether or not it will effectively block an EMP. There has not been enough testing to state with certainty that such a Faraday Cage would work effectively. However, a metal garbage can most likely would.

Read more: What To Store In A Faraday Cage For EMP Protection?

Warehouses are almost universally metal buildings. As such, they are all Faraday Cages. That means that the stock stored in those warehouses, which is pretty much always wrapped in some sort of non-conductive material, should survive the EMP. That’s a lot of electronics! The question remains, when would we be able to use them again?

This being said, it’s never too early to organize your own Faraday cage. You can use any metal container, just be sure to add bubblewarp or cardboard or even dry old clothes to make sure your items stay off the metal walls. Remember: you need to be prepared in order to survive! 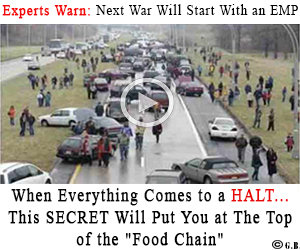