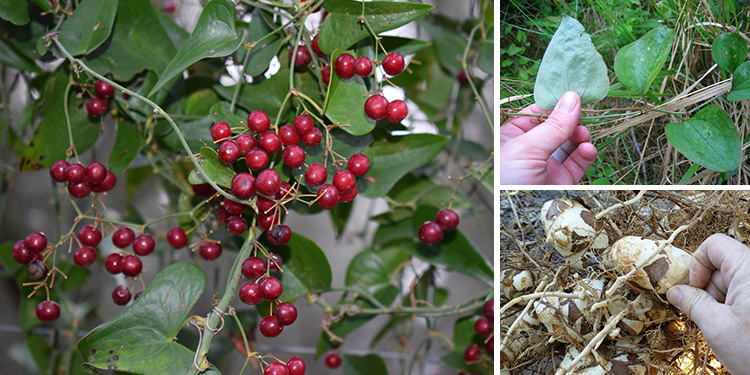 It’s kind of amazing to me how few of the edible plants out there we actually eat. Big Ag and Big Food have limited our diets to foods that grow well in monocultures and are hearty enough to survive shipping.

But while the supermarket shelves may only stock a few varieties of lettuce and leafy greens, Mother Nature provides us with a much broader selection if you know what you are looking for.

Smilax is a wild superfood growing all around that you probably have never heard of. From root to tip, you can eat every part of this plant. So, it is a great one to know about for when SHTF.

Related: Do You Recognize this Tree? [All Parts are Edible]

Let’s take a closer look at what smilax is, how to identify and use it, and dangerous look-alikes. Then you can add one more plant to your foraging list.

What Is This Wild Superfood?

Never heard of smilax before? Perhaps you know it by one of its other common names, green briars, catbrier, or carrion vine. While smilax may be thorny and a little stinky (as its common names imply), don’t let that deter you from learning more about this wild superfood. 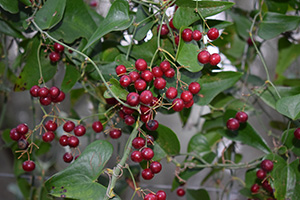 While often referred to as vine, smilax is actually a climbing shrub. You can find it growing wild in the Eastern and Southeastern US. While it likes moist woodlands, it is hearty enough to survive dry periods as well. And it can aggressively climb trees or create dense brier patches.

There are over three hundred different species found east of the Rockies, which can make identification seem intimidating. But don’t worry, once you get the hang of it, you’ll realize it’s rather easy.

The sheer number of varieties can make the idea of identifying smilax seem overwhelming. However, the first thing to realize not all varieties will grow in your region. So rather than three hundred species, you can focus on the nine or ten that are native to your area. 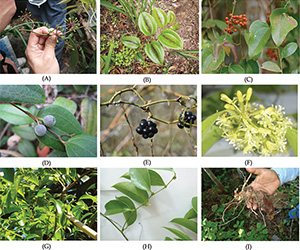 The best place to learn to identify your local species is through a local horticulture society, Master Gardener program, or university extension program.

The University of Florida Extension, for example, has a publication identifying the nine most common smilax species of Florida.

But let’s look at some of the common identifying features. 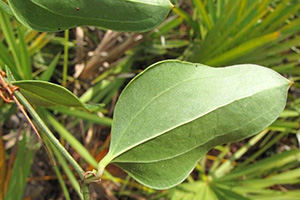 With so many species of smilax, the leaves come in all colors, shapes, and sizes. That being said, there are some similarities that you will find between all species.

All species will have palmate leaves. The means the veins on the leaf all originate from the same central point.

Beyond that, they may be heart-shaped or lance-shaped, dark green, light green, or speckled. Smilax’s leaves can vary greatly. 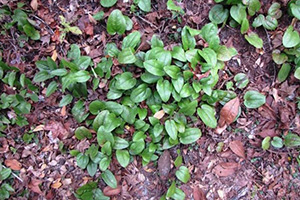 Another feature of smilax is that it is both twining and thorny. As most plants do either one or the other, this feature can help you identify smilax.

At the ends of the plant, you will see the tendrils that smilax uses to climb. Trace these back to the vine.

If the stems have thorns, that you can be pretty confident you’ve found smilax. Look for the palmate leaves to be certain. 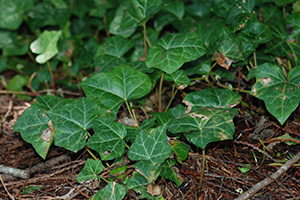 Make sure you use caution when foraging for smilax. Most vines you encounter in the wild are poisonous, and some, like English Ivy, look very similar.

English ivy features palmate leaves of varying shapes and sizes, just like smilax. It also has tendrils that climb.

The defining feature to look for is the thorny stem. Smilax has stems while ivy does not. 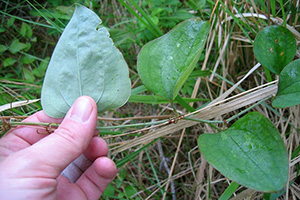 Once you have positively identified smilax, then you can begin to decide what to do with it. As we mentioned, all the plant’s parts can be used either edible or medicinally.

Traditionally, the plant was used to treat syphilis, though I wouldn’t recommend it.

However, studies show that the smilax plant is antibacterial, antifungal, and antiinflammatory. It can be effective at treating psoriasis, arthritis, and liver problems. High in vitamins and minerals, smilax is a great addition to your diet. 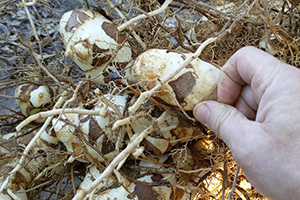 Perhaps the best-known use of smilax comes from the roots. Sasparilla and root beer were traditionally flavored with smilax roots along with other roots. These drinks were originally sold as medicinal tonics. But that isn’t the only way to use the roots- they can be roasted or cooked like other roots and tubers.

In addition, they can also be dried and ground into flour. Historically, people also used smilax roots to thicken stews.

Related: 6 Backyard Plants You Can Turn Into Bread

However, a study showed that sassafras might cause cancer in rats when consumed in large quantities. At which point, the FDA required commercial rootbeer manufacturers to stop using it. (It should be noted that the amount of sassafras consumed by animals in the study was the equivalent of a human consuming 12 thirty-two ounce rootbeers a day!)

Birchbark was also a common ingredient that added a distinctive wintergreen flavor. Other roots and spices, like ginger, anise, licorice root, cinnamon and vanilla, were often added to traditional brews as well. 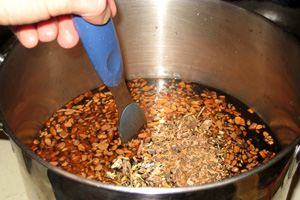 You can make a delicious sasparilla at home using this wild superfood root, sassafras, and a combination of other herbs and spices to your taste.

I keep a ginger bug going in my home for brewing sodas and ginger beer, but you can use kombucha or water kefir as well.

And if you don’t have any ferments going at home already, you can always try commercial yeast. I used to use ¼ tsp of bread yeast per two-liter bottle before I started my ginger bug.

1. Add water and your spices to a large pot and bring to a boil.

3. Remove from heat and stir in sugar.

4. Allow the mixture to cool.

5. Strain out the spices.

6. Add the mixture to either flip-top bottles or clean plastic bottles. 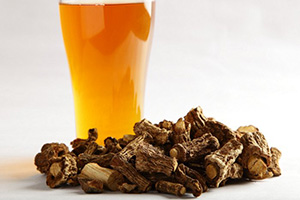 7. Leave for 3 days to ferment and get bubbly. Cooler climates may require additional time. If you are using plastic bottles, you can check on your fermentation by squeezing them.

If they feel hard to squeeze (think of an unopened soda bottle), they are done.

Don’t leave them too long. The bubbles will build up pressure, and over fermented beverages can explode.

8. When the fermentation is complete, move to the refrigerator to chill. Wait a few days for the distinctive bubbliness of sasparilla to appear.

You can add other spices and vary the quantities to find your ideal flavor. You can also substitute some or all of the sugar with molasses for a more traditional brew. 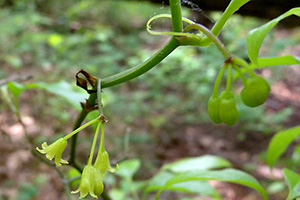 You can eat the tender young leaves and stems of the smilax plant. It’s best if you harvest in the spring. When you find the shoots, always make sure you confirm the plant has both tendrils and thorns.

Then you can go ahead and harvest the tender rather than woody parts.

You can eat the leaves and stems raw in small quantities, but they can cause digestive problems in large quantities. You can also cook them gently.

This can help improve the flavor, as well. Use them like you would use spinach or asparagus, depending on if you are eating more leaves or stems. 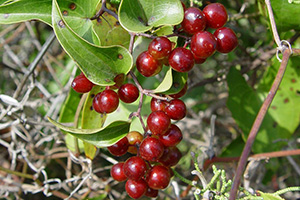 This wild superfood produces berries in the fall. They are usually reddish and often appear to hang from the vine, like grapes.

While smilax berries are edible, they are small and often contain a large inedible seed. You would have to eat an awful lot of them to satisfy yourself.

And since they provide food to a whole host of woodland critters, I would save them for a true survival situation.

If you do plan to eat smilax berries, make sure you engage in proper identification. Many red berries that appear in the fall are poisonous.

Smilax is one more plant to add to your foraging list. You can eat this versatile plant from root to tip. High in vitamins and minerals, as well as having medicinal properties, smilax is a useful plant you won’t find in the supermarket aisle.

But as you go out for your walk in the woods this spring, keep an eye out for smilax growing by woodland steams. If you see the vines with thorns and tendrils, cut some tender shoots to try for dinner. 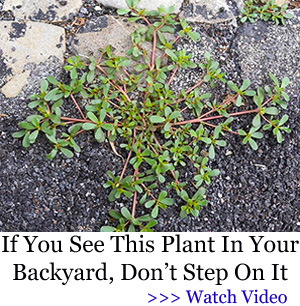 Strange and Effective Way to Store Bacon for 15+ Years