The Arthritis Formula You Can Find Hanging In Your Backyard

There are a number of things that could be considered “holy grails” within modern medicine. These are things that seem to defy the best efforts of medical science, no matter how much effort is put into them. Cancer is one such thing, with billions spent annually to try and overcome this horrendous disease. But cancer isn’t the only thing. Simpler ailments, like arthritis and the common cold seem to defy our best researchers as well.

Yet there may be a cure to arthritis, which has been sitting right under our noses all this time. As crazy as that might sound, it’s really not all that surprising. Modern medical science depends greatly upon the pharmaceutical industry, whose roots are in herbal medicine. Yet the pharmaceutical industry regularly rejects herbal medicine, while at the same time seeking new compounds in nature which can be synthesized to produce cures for countless diseases.

This dichotomy comes from the fact that you can’t patent something that exists in nature; yet all cures ultimately come from nature. So what the pharmaceutical industry does is search for these cures in nature, then tries to create something artificial, which is close enough to the natural occurring chemical to do the same job, but not the same, so that they can patent it.

Patenting a medicine is essential to the pharmaceutical industry’s success, because they can’t make any money, unless they can charge for their medicines. Worse, from their point of view, is that others can make their medicines, without paying them royalties; so, they have to patent them, so they can recoup their research costs and make money. Sadly, it’s really not about helping people.

Such is the case with this ancient, yet modern cure for arthritis. Apparently the Chinese have used this naturally occurring substance for centuries, yet we are just finding out about it now. Time for us to catch up, I guess.

What the Studies Show

Unlike many herbal cures, this one has actually been studied by someone other than the companies trying to sell the herbal supplements. Kyung Hee University, in Seoul, Republic of Korea (that’s South Korea) has released findings that show that pine pollen is a potential antioxidant and beneficial for inflammatory conditions. It works through down-regulation of JNK and MMPs, making it beneficial for the treatment of chronic inflammatory disorders.

To put that in simple terms, the chronic inflammatory disorders we’re referring to here are arthritis; both rheumatoid arthritis and the more common osteoarthritis, which comes from the degeneration of joint cartilage and the underlying bone in people from middle age onwards.

These aren’t the only thing that pine pollen is useful in curing. Pine pollen is so rich in phyto-nutrients and other beneficial nutrients that it is being referred to as a super-food in some circles. The full list of conditions which pine pollen can help with is still to be determined.

However, pine pollen is one of the few natural substances which has been shown to increase testosterone levels in men suffering from low testosterone, when taken in a tincture. Once again, this claim is backed up by research, specifically checking the testosterone level in the test subjects blood, both before and after taking pine pollen.

As with other natural cures, pine pollen focuses on treating the root cause of the illness, rather than merely treating the symptoms. This allows the body to cure itself, resulting in long-term benefits, even after the treatment is completed.

Pine pollen is regularly available through a number of different natural medicine companies. They sell it in powder form, as well as in tincture, tablets, capsules and as a powdered extract. A dosage of between 100 mg to 200 mg per day was used in the studies mentioned above. Test subjects took the pine pollen from 21 to 49 days.

Where Pine Pollen Comes From 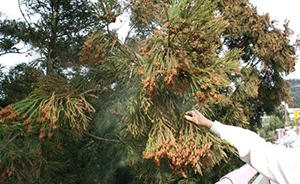 Pine pollen is a naturally produced substance from male pine cones growing on pine trees. In general, pollen is the male part of fertilization in plants, containing the male gamete and able to fertilize the female ovule. The pollen is transferred to the ovule by wind, insects or other animals.

Not all trees that grow needles are actually pine trees, but only those whose technical names start with “pinus.” For our purposes, the trees we are interested in have a sheathe around the base of the needles and the needles grow in clusters of two to seven needles in a sheathe, depending on the specific species of pine tree.

It is easy to tell when the male pine cones are ready to harvest pollen from by flicking the pine cone with the tip of a finger. If the pine cone releases a puff of yellow pollen, it is ready. The cones can then be harvested by twisting them at the base, breaking them off the tree. Pine trees will normally have a lot of extra male pine cones, so we can harvest quite a bit, without significantly reducing the tree’s ability to reproduce. 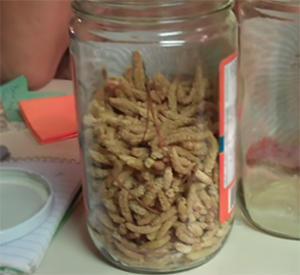 To remove the pollen from the male pine cones, put the cones in a large glass jar with a lid. Simply shaking the jar will cause the pine cones to break up, releasing the pollen. The bits of broken pine cone can be filtered out by passing the mixture through a strainer or sieve.

If some of the pine cones are not mature yet and don’t break up, don’t throw them away. Rather, set them out in the sun for a few days, allowing them to finish maturing. Once they do, you will be able to extract the pollen.

Pine pollen can get bitter and rancid over time. The easiest way to keep it for a prolonged period of time is to put it in a glass or plastic container and freeze it. In addition to taking it directly as a dietary supplement, it can be added to baked goods, much like wheat germ.

The Black Walnut Hull Remedy That Cleans Your Intestines Of Parasites

How to Treat Allergies Naturally This Spring