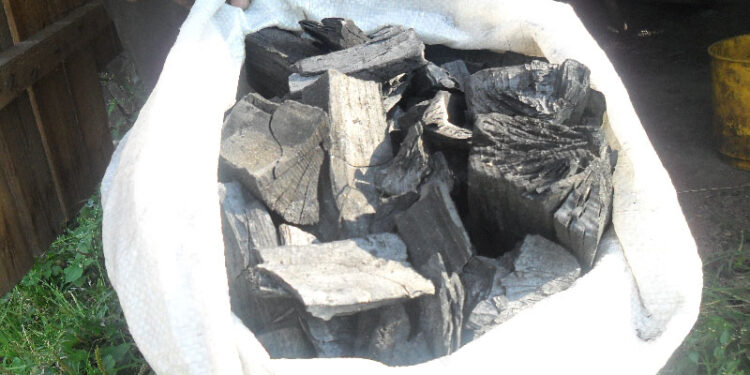 How to make your own charcoal?

This autumn, when I was backpacking across Rockies, I was surprised to see that increasingly more people stick to their traditional way of producing goods. Somewhere near the end of my journey, in Montana, near the Glacial National Park, there is a small city called Kalispell. Here, looking for a place to fix a flat tire we ran into a guy called Peter White, locally famous for being one of the best craftsmen in the area. At his workshop we found a very large backyard and lots of tools, tires and debris. For sure we were not his first costumers and fixing flat tires was not the only thing he was good at.

While he was fixing our tire, two men were loading 20-25 bags of charcoal into a van. We soon found out that they were buying homemade charcoal from Peter and they were supplying one of the best traditional restaurants in the area.

Peter allowed us to stay and watch while he was making the fire for the next round of charcoal. Finally he shared with us some of his secrets:

“First of all the wood that we want to turn into coal has 100% to be beech wood. The wood is thick, so I pile out higher and higher. In the middle of the pile of wood, I carefully placed pear-shaped, place dry twigs sprayed with oil. Even if it seems small, with only five feet tall it will produce enough charcoal to fill 30 very big bags.” “Once completed, the pyre cover with scrap feed horses gathered from the manger, and doused with water.” “Over the entire pyre I put scrap pieces of coal that is left from previous productions or dry soil”. According to Peter, the secret of coal quality is the wood burning and smoldering – as long as the wood used is neither too dry (in which case it burns too quickly) but not too green (in which case it would melt because of the heat). Resulting coals are then placed in bags like the one below and store. From the last production Peter produced 30 bags, each bag worth 10$. After completing the pyre, Peter lighted the fire in the middle. The fire has to burn for three days. He is actually keeping the fire under control: not to burn the beech wood, to have enough oxygen to smolder, not to stop the fire and not to start a fire. Today I remembered about Peter and I wanted to share with you this traditional way of producing your own coal. I hope this information will help you some day, maybe make your own charcoal or sell it to others.

Of course this information may be very, very useful in a major SHTF situation. Charcoal may be one of the most important exchangeable goods. You may trade it for other resources you can’t procure. Knowing how to make it may prove fatal for your survival. Charcoal may also help you:

– Easily transport fire from a place to another;

– Reach temperatures higher enough to melt iron for producing weapons (Compared to wood, which burns slowly and develop a much smaller amount of heat, charcoal is a superior form of fuel, capable of producing energy for melting metals. Therefore, it was used in metallurgy as a base material for more than 3,000 years, until the end of the eighteenth century, when the growing demands of metal and wood shortages led to the replacement of fossil coals)

– Easily light up (maintain) a fire;

– Medicinal activated charcoal has become the treatment of preference in medicine; treating poisoning or overdose after oral ingestion, even more effective than classical methods like washing or pumping the stomach; it is also used to treat diarrhea.

– Smoking meat because it contains fungistatic substances that inhibit the growth of germs, mold or fungi on the surface of the meat, leaving  at the same time, a good taste.

After a little search on the web I found out more about other traditional ways of producing coal. Some of them easier in some ways then Peters, but unlike his pyre, all other methods needs special tools. Tools you may not have or find in a SHTF situation. Please find below my top 3: