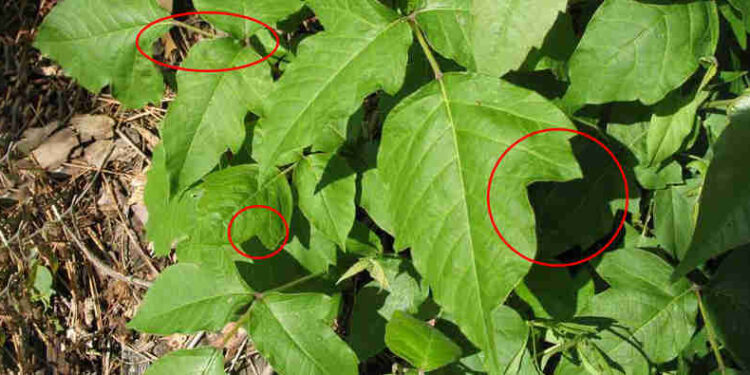 How To Identify Poison Ivy Growing In Your Backyard

How To Identify Poison Ivy Growing In Your Backyard

Poison ivy (Toxicodendron radicans) is a very common plant in the United States and it is very persistent. Poison ivy grows rampant and can quickly take over an area.

One common sign that you’ve had contact with poison ivy is an itchy rash on the skin where the contact happened. It may be just red and itchy, but the rash usually forms fluid-filled blisters before long. If you scratch, this rash can quickly spread to other areas of the body or to family and friends. And believe me, that is not a good thing.Not everyone reacts to poison ivy, so if you don’t get a rash it may mean that you are immune. Investigate the suspicious plant carefully, because your family members may react badly. In this article, I will teach you how to identify poison ivy in your backyard or neighborhoods, and how to get rid of it.

The plant is most known for the pattern of three leaves in each set. But where it grows in a mass, many leaves bunch together and you may not notice that the leaves are in sets of three, so look closely and don’t touch.

Poison ivy is not a real ivy, but its growth pattern is similar. It grows up surfaces like walls, fences, over trees or bushes, between rocks, and along the ground. However, it can also grow in a bush pattern or form a dense mass of growth. I have even seen the vines wrap around each other and take on the shape of a tree.

The Leaves Of Poison Ivy As mentioned above, poison Ivy leaves always grow in sets of three. However, some other plants also grow in clusters of three. When you see a set of three leaves,  be careful. Look for the other identifying characteristics without touching the plant.

Poison ivy plants are usually bright green in the summer and turn yellow to red in the autumn. You will often see young, smaller red leaves alongside the green leaves. In autumn, leaves may be anywhere from deep red to orange or yellow and can even be mottled with both colors. Leaves sporting yellow or orange may also be poison oak.

Poison ivy leaves in my area are usually smooth and lance-shaped, but some varieties are serrated or even lobed on the sides. All varieties come to a point at the leaf tip.

Each group of three leaves has a center leaf that is longer than the two side leaves and has a stem. The side leaves grow directly from the vine. Unfortunately, you may not notice the difference if you are not looking closely. The difference is small, but it is there.

Often the leaves will appear darker and waxy or shiny; but this is not always true. The undersides are lighter in color and fuzzy. Don’t be tempted to touch it, however. If you must, wear gloves.

The Vine And Poison Ivy Flowers

The vine or bush will usually produce clusters of small flowers in the spring. The flowers are often white but can also be yellowish white and may have yellow centers.

When the flowers fade, small clusters of white, greenish-white or tan berries appear and stay on the vine throughout the winter. Birds eat these berries, but you should never be tempted – notice the word “poison” in their name?

Teachers and parents have come up with rhymes to teach children to identify and avoid poison ivy. The one I learned as a child was “Leaves of three, let them be!” which also worked for poison oak. Here are some others:

How To Get Rid Of Poison Ivy In Your Backyard

Stop! Read all these instructions before you even think about getting rid of poison ivy. My father-in-law was one of the lucky people who is immune to poison ivy. However, when he started removing it from his backyard, he decided to burn the vines to make sure the plants were completely gone. This is a very bad decision, even if you are immune. He found that he was not immune to the smoke and got one of the worst cases of poison ivy ever. The smoke can also damage your lungs – imagine that rash! So, no burning! Likewise, no composting. You don’t need a new generation of poison ivy in your compost, or spreading throughout your garden.

Related: 21 Wild Edibles You Can Find in Urban Areas

Dress For The Job

You need protective clothing, no matter which method you choose. Wear shoes, socks, long pants, long sleeve shirt, and gloves. If possible, choose clothing which is not absorbent such as a windbreaker, hip waders, or other waterproof clothing. The oils from the plant can soak through regular clothing when you are working with a lot of plants. And be very careful, when removing your clothes, not to touch your skin.

This is probably the easiest way to get rid of poison ivy, but my least favorite. I just don’t like spraying areas where my children play. Herbicides that contain glyphosate, triclopyr, amitrole or 2, 4-D will do the job. Just make sure to avoid other plants and to continue spraying the poison ivy plants until they are dead, it will take multiple sprays. Once you’ve killed them, dig the plants up, roots and all, and put them in a plastic lawn bag. Check the area closely the next spring to make sure no new sprouts appear.

I recommend this method because it is only a little more work than the herbicide method and it works without adding dangerous chemicals to the environment.

This Is A Four-Step Method:

#1. Wearing protective clothing, cut off the vines at the ground level with gardening shears. Scrub the shears with soapy water to remove all the oils after use. Put the vines in a plastic lawn bag for disposal.

#2. Choose a day when the soil is damp or wet. This makes it easier to dig and to get the smaller side roots without breaking them. Wearing gloves, dig up the entire root system, using the tip of the shovel to remove small bits that may come loose. Dispose of the roots in a plastic lawn bag.

#3. This step is optional, or you could skip step 2 and just do this one. But I like to do both steps to make sure I get as much of the roots as possible. For this step, pour boiling water in the hole and stretching out around the removed roots. This will kill any roots remaining in the soil. Repeat this step several days in a row and watch for sprouts returning.

#4. Early the following spring, begin watching for sprouts that might have survived and treat them as well. Poison ivy is hard to kill completely; it seems to always return. So, you must be vigilant.

I cannot over-emphasize how important it is to be watchful for poison ivy on your land. It can cause a lot of suffering if ignored. The best results are achieved if you eradicate it as soon as possible and watch the area like a hawk for returning sprouts.

I hope this helps you identify and remove any poison ivy in your yard. This is one plant you shouldn’t ignore. What You Really Need in Your SHTF First Aid Kit

How To Make Tea Tree Oil To Treat Infections