Like many things in life, there are ideal tools to accomplish certain tasks. Traps are another example of just that. Matching the right type and size of the trap to the animal you’re after is essential for success whether it be harvesting meat or fur. In this article, I will go over different types of traps that you can set and catch animals while you sleep, be it for survival or to make some extra cash.

First up is the tried and true foothold trap. It’s usually what first comes to mind when people hear the word “trap”.

Footholds come in a variety of shapes and sizes to catch anything from weasels to bears.  Long-spring, coil spring, jump, and even dog-proof are all styles of leg-holds that are in use today by trappers for catching animals.

All the traps in this category have some form of spring which, when triggered by putting pressure on the pan, pushes the jaws of the trap up to hold onto the animal.

These are all non-lethal and when set properly does not break bones or injures the animal. Some of these traps have added rubber on the jaws, wider jaws, or off-set jaws to further minimize discomfort to the animal.

They can be used in a wide variety of sets and are relatively straightforward to use. Most often they are disguised by being buried under a thin layer of soil near a bait site or lure (urine or gland scent) to entice the animal to come near and step on it.

One potential downside to these traps is that they can be harder to maintain as the ground freezes the metal springs and jaws can also freeze, allowing animals to walk over them un-triggered.

These traps involve any type of cage or enclosure that captures the entire animal. This was my first venture into trapping as a child with a homemade box trap.

Typically, when animals enter these traps, which are baited to entice the animal inside, there is a footplate or other trigger, which closes a door behind them.

Again, this type of trap can be made as big or small as you can imagine. Mice to bears have been caught in this style of trap and are often utilized in wildlife surveys because the animal is unharmed and can be easily transported in the cage or container.

Colony traps are based on the same concept as box traps but unlike box traps that only catch one animal at a time, colony traps are able to catch multiple animals at once. They allow the door to hinge open from the outside but not the inside to accomplish this. These can be used on animals like muskrats, which live close together and can be baited into the same space.

Both styles are often set wherever you think the intended animal of capture frequents with bait or a lure. The colony trap can also be used unbaited underwater to catch muskrats on obvious swimming trails. In other scenarios, it’s as easy as bait, open the door or doors, and wait. It is the most simplistic of the traps to set and can offer harm-free releases of unintended by-catch.

These style traps are a bit bulky to carry any distance and are on the pricier side if you are buying them commercially.

Related: An Ingenious Way to Catch Pigeons and Other Birds in Your Own Backyard

Snares are probably the most simplistic trap type on this list. They are made up of a piece of wire or cable formed in a loop like a lasso that is intended to tighten around the neck or around the foot of an animal.

Snares can be attached to springs as well making them close quickly giving the animal less time to get out. The beauty in snares is how minimal, affordable, and highly portable they can be.

Many can be carried into the field without being as heavy and bulky as footholds or cage traps. You could slip one or two into a coat pocket just in case the opportunity arises.

They can be used in either a lethal or non-lethal fashion on the ground or below water for a large range of animals depending on how they are set. Most often these sets are made on paths followed by the intended animal of capture. It is even possible to bait sets depending on the animal and location.

Smaller gauge cable can be used in the winter snow on an active rabbit or hare trails to catch your dinner with great success. Snares also function quite well in the cold where other traps could have difficulties with freezing on or in the ground.

Conibears or body-gripping traps are designed to quickly break the neck of the captured animal. These traps have strong springs that compress, enabling the jaws to be opened.

The jaws are normally square-shaped and allow any unexpecting animal to walk or swim through. When these jaws are open there are two small trigger wires which, when touched passing through, set the trap off. This is very similar to the way the pan is triggered for a foothold trap.

When the pan or trigger wires are moved, the catch (called the dog on traps) is flipped off the jaws and releases the springs closing the jaws. When triggered these jaws shut around the body of the animal killing it.

These like snares are often set in trails of the intended animals to be caught but can also be used with bait put on or near the trigger. They are extremely effective when used at burrow or den entrances of muskrats, otters, beavers and many weasel species.

Many areas have laws regulating the use of this style trap because of the danger of killing unintended wildlife and pets. When used properly they are highly effective at capturing and euthanizing furbearers. Because of this, they don’t have to be as securely fastened to ensure the animal doesn’t escape.

Some caution should be used while using these, especially with larger conibears, as they can break fingers and even arms when used improperly.

Related: 34 Prepping Items to Get in your First Month

Deadfall style traps are not used as often by fur takers, but in a pinch, they are valuable to know how to set and use. 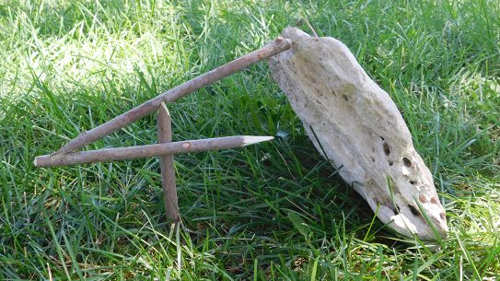 Deadfalls can be set in a variety of ways, but one of the most popular styles in use is called the figure 4 set. This name comes from the shape the trap resembles when it is constructed. This trap, unlike the others, can be fully assembled in the field with just three straight sticks, a knife to carve notches in those sticks, and a heavy object, usually a flat stone, which crushes the animal.

To build one you will need three straight sticks about the diameter of your thumb and 20cm (8inches) to 30cm (12 inches) long.

The vertical stick (stick #1), should be cut blunt or flat on the bottom to be set on the ground and should come to a flat point, like a flathead screwdriver, on the top. The blunt side at the bottom is needed so that the weight of the rock doesn’t drive the stick into the ground, and allows the rock to fall flat when triggered. Lastly, the vertical stick should be carved to have a shallow 90-degree shelf where the horizontal or trigger stick (#3 stick) crosses and can slightly sit on the vertical stick. It’s usually easier doing this notch last to get the measurements to line up at a 90-degree angle in the center of the 4.

The horizontal stick (stick #3), should have the 45-degree angle to accommodate the flat point of the diagonal stick on one end and have a 90-degree shelf matching up with the 90-degree vertical shelf enabling them to fit together in the middle. The tag end of this horizontal piece can be sharpened to hold bait. Once all carved the stone is leaned against the diagonal stick, which puts pressure on the structure holding it together. Ideally, an animal will come along, grab the bait at the end of the horizontal stick, which makes the sticks and rock collapse, crushing the animal.

Whittling the figure 4 sticks to all fit properly while being able to get a rock tilted against the top can be a bit of a balancing act and can take some patience and practice to get consistent positive results. This type of trapping is good for survival and killing smaller prey items. It can take some time to build a deadfall that functions well and supports a sufficient load to be dropped on the animal. As with any type of trapping, making more of these sets will increase your odds for success and can be a lifesaver in a survival situation.

There you have it. Five styles of traps that can all catch animals while you sleep. These can passively make you money by getting the fur to sell/wear or have meat to harvest. Match the right trap for the animal and situation you‘re in and you’ll be better off for it.