In a survival situation there are dozens of ways to cook outdoors without power.  Solar ovens, clay ovens and open fire cooking are just a few; there are many more.  But what happens when the grid is down and you need to stay indoors?  Anything from a hurricane or extreme cold snap, to a longer-term emergency like a pandemic or nuclear fallout situation, can force you to do your cooking inside.

Most long-term storage preparedness foods, like white rice and beans, require cooking. How do you feed your family, while at the same time keeping them safe indoors?

Related: How to Make A Cool Rocket Stove For Free Electric stoves are more common these days, and propane stoves are even banned in many apartment complexes.  But if you happen to have a propane stove, you don’t need electricity to cook.  Even propane stoves with a built-in electronic igniter can be lit with a match or your trusty Zippo.

Most domestic propane stoves have a fume hood that helps dissipate toxic fumes or gases produced during cooking.  Many families don’t bother to use them.  Growing up, ours never worked, and our house was naturally well ventilated enough that it never mattered. In a major crisis hoods with a powered extractor fan probably won’t be working anyway.

Keep in mind that any stove that’s burning fuel needs a good air supply. If there isn’t enough oxygen in the air the fuel won’t burn properly, and that releases deadly carbon monoxide gas. Always use stoves in an area that has good ventilation. This can be a problem if there’s a fallout hazard, so when you’re preparing fallout rooms or shelters make sure there’s a good, properly filtered air intake in a location that will let you cook safely. We often forget that electricity is a relatively recent invention, and that our ancestors cooked in fireplaces and on wood stoves for centuries.  A Dutch oven is just that – an oven.  It can be used to bake cookies on a wood stove, trapping the heat inside the cast iron and creating an oven from just about any heat source.

While most people no longer have the equipment at hand to simmer a stew hung over their fireplace, it’s easy enough to bend a wire coat hanger into a skewer and cook simple foods over the fire. If you have an old fireplace with cooking hardware like a spit, grill or swing trivet, overhaul it and get it into working order. If you don’t have these items, look at installing them.

Wrapping food in aluminum foil in the fireplace or wood stove is also a good option. Often used to heat food indoors on buffet tables, “canned heat” is sold under the brand name Sterno.  Sterno cans contain an alcohol-based fuel that burns cleanly, and individual canisters can burn for up to two hours for continuous heating.

Since they’re designed to burn mostly unattended for the entire duration of an event, they’re a good option for slowly simmering a small pot of stew or beans.

Keep in mind that each canister is small and can only heat a small pot.  If you have a larger pot, use 4 or 5 of the heat cans to bring it up to temperature and keep the lid on to retain heat.

The main benefits of canned heat are that it’s specifically designed for use indoors for heating and cooking food.  They can safely be used just about anywhere, assuming you have a stable surface that won’t tip over.

They’re easy to store, portable, and a great all-around solution for indoor cooking. Cooking over a candle is not a lot different from cooking over a Sterno canned heat canister.  All you need is the ability to suspend the food over the heat source.  Larger candles with multiple wicks might be a better choice if you’re trying to boil water.

Choose a candle that burns relatively cleanly, like all-natural beeswax candles.  Avoid scented, heavily synthetic or dyed candles.  The more “stuff” that is in a candle besides the wax fuel, the worse it will be for indoor air pollution when you’re cooking in an emergency.

Inside MREs there’s a chemical heat packet that can be used to warm food.  For example, an MRE might include a vacuum-sealed shelf-stable chicken breast, and along with it there would be a heating pouch that uses a chemical reaction to warm the food.  It works like snap activated hand warmer packets.

While I wouldn’t feel safe putting hand warmer packets directly into my food, I would wrap a can of spaghetti-O’s in hand warmers and have a reasonably hot meal in minutes.

One manufacturer, called Magic Cook, makes a flameless stove that uses a water-based chemical reaction to create heat to cook food.  Simply add water to the heat pack to generate sustained heat for 15 to 20 minutes to warm food. A big advantage of chemical stoves like this is they don’t release carbon monoxide – but some kinds may release flammable hydrogen, so be careful.

Once you’re done cooking, the heat pack has absorbed the water and the reaction is complete.  The heat pack can be disposed of in a normal household trash can.

This type of flameless stove is convenient to have on hand for a few uses while the power’s out, but since it requires expensive specialized heat packets, it’s not a good choice for the long term.  That said, most emergencies are day to day emergencies, where the power is out for a day or less.

Related: How to Make Your Own Solar Stove So while you may not have electricity in your house, your car’s battery is full of juice.  There’s one manufacturer that makes a small heating element that plugs into a cars cigarette lighter.  Keep in mind that this will kill your car battery quickly, and you shouldn’t turn on your car’s engine while it’s in the garage.

Car lighter stoves are best used in situations where you can actually run the car.  If you’re on the road during an emergency, and you need an “indoor” way to cook inside your car for any reason, this is a reasonable option. 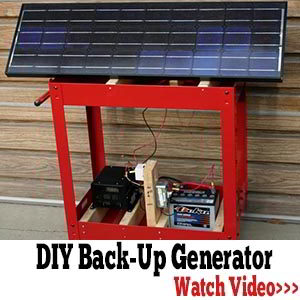