What Happens If You Bury A Cabbage Over Winter?

Do you prefer fresh coleslaw to Sauerkraut in winter? Here are some ideas on how to use available resources, reduce food waste, and eat deliciously wholesome and garden-fresh leafy vegetables throughout the chilly season. Bury your cabbages in the ground to preserve them, and simply dig one out whenever needed.

Our grandparents used to do that, and we may as well follow their lead to enjoy crisp, intensely flavorful cabbage most of the year. Cabbage is a cold-weather vegetable that can survive frost, and it tastes sweeter after having been buried underground during the cold winter months. You can delight in the best cabbage you’ve ever had when you least expect it, and it is delicious when boiled and fried as well.

Cabbage yields many heads as it grows thickly, which means that you need to thin it out by replanting some of the heads in another row to provide enough room for all them to get as big as possible by the end of the growing season. Your cabbages should be ready for harvesting by fall, at which time they begin to thrive because of the colder weather.

People from different areas applied distinctive techniques to provide themselves with food that resembled fresh vegetables in the dead of winter many years ago.

The inhabitants of the Blue Ridge Mountains had two schools of thought: above ground and below ground. The above-ground technique involved immersing the cabbage heads in piles of soft hay or stacking them in a dome surrounded by banks of corn fodder. The below-ground option was more popular.

Homesteaders also tested what would happen to root vegetables when buried. Roots, however, rot when they’re surrounded by wet, heavy soil. We’ve since discovered that beets, carrots, horseradish, Jerusalem artichokes, parsnips, potatoes, turnips, rutabagas, and celeriac can be stored underground − in temperatures of 32 to 40 degrees Fahrenheit with 95 percent humidity.

Roots and cabbages should be buried below the freeze line in areas where the ground freezes in winter. Roots can be placed in a pit in a shady spot, inside plastic bins or rodent-proof containers, with wire mesh on top. Fill the rest of the pit with peat moss and cover the hole with plywood.

You may leave roots in the ground where they were grown if the ground doesn’t freeze in your area. Cover them with six inches of straw and a layer of plastic to protect them against the rain, and harvest as required.

Related: 17 Forgotten Preservation Hacks that Will Save You Money

There are dozens of cabbage varieties, so read up on the one you’ve planted to know what to expect.

Pick cabbage at any size once the head is firm but before it splits, and keep the most solid, firmest, and largest heads for winter storage. The others should be used within about a month. The best varieties that last the longest are the Rio Verde and Danish Ball Head.

You want to leave the long stem or roots on when you harvest your cabbage.

Don’t wash the cabbage but prevent bruising as you take any rotten and yellow leaves off and tightly wrap the fresh green ones around the undamaged central head. Allow the cabbages to stand where they grew initially until it gets cold.

Dig a furrow of two to two-and-a-half feet in the dry ground or widen the hole where you’ve removed the cabbage. 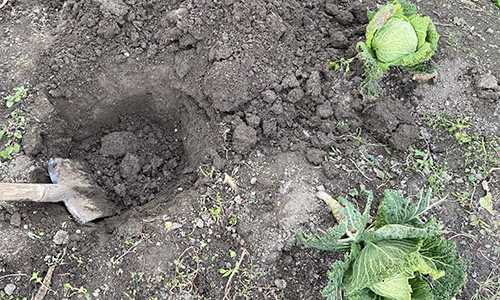 Line the hole with a layer of straw for insulation before putting the cabbage in upside down, with the roots or stem pointing up into the air. 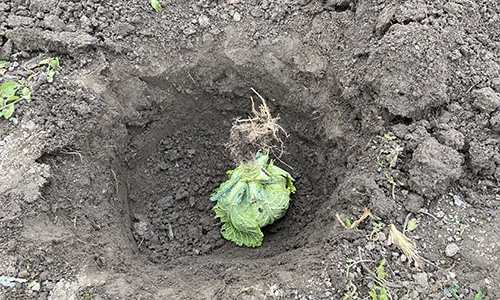 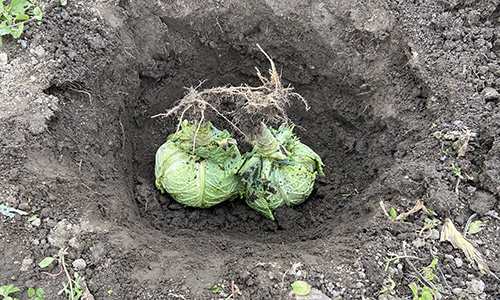 Cover the entire cabbage with approximately six to ten inches of mounded dirt − leaving a bit of the stem above the ground − but make sure to do so lightly at first to avoid warming. 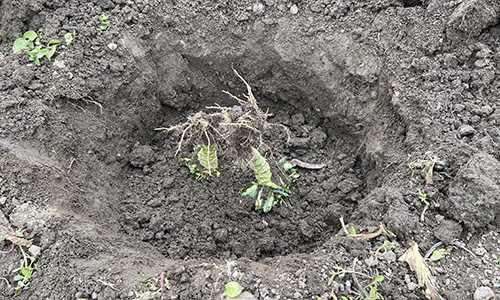 You may cover them with straw or coarse manure as the weather gets colder. Some gardeners suggest that you make the storage beds about six to eight feet wide to reach the middle from either side. You want to prevent heating as cabbages decay in warm weather. 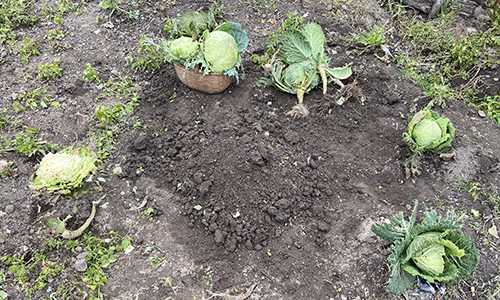 It may make it easier to get to the cabbages after the loam has frozen or when snow covers the ground if you cover the area with a tarp or burlap sacking.

The cabbage goes to sleep but stays alive for months because it is refrigerated and insulated by the adjoining soil. The above-ground root absorbs the moisture it needs and becomes a signpost to show you where you buried it.

Another option is to bury your cabbages beside a barn wall or outbuilding, so you know exactly where it is. Examine your stored cabbages frequently and take out yellowing heads and those that start to smell rotten. Just loosen the dirt around it and pull it out before preparing a meal.

You know that cabbage has health benefits but may not always remember why.

It is rich in Vitamin C, which boosts the immune system and heals skin conditions such as eczema and psoriasis. The high Vitamin K content contributes to teeth and bone strength, prevents blood thinning and clotting, and may help to avoid Alzheimer’s disease. Our bodies convert the beta-carotene cabbage contains into Vitamin A, which reduces the chances of cataracts and macular degeneration of the eye.

Cabbage is also a powerful source of amino acids that fight inflammation, and it supplies fiber and glutamine that is good for digestion, prevents stomach ulcers, and improves intestinal health. Potassium and calcium regulate blood sugar levels, and sulforaphane has anti-cancer properties.

The Advantages of Burying Cabbage

Your stashed cabbages will last about three to four winter months, which is exactly what you want. The outer leaves will get soft and dirty, but the earth preserves the food by protecting the head against snow and rainwater. The inside will still be fresh and deliciously edible once you’ve peeled off the outer layers.

How To Easily Cook It

You may want to try this easy fried cabbage side dish recipe, which can be done in 30 minutes and will keep for three to five months. Slice the leeks and cabbage thinly and dice raw bacon.

Add a little oil to a large, preheated pan, add the bacon, fry until the bacon is brown, and add the leeks. Add the cabbage when the leeks are soft, season with salt and pepper, and stir every few minutes until the cabbage is cooked uniformly and slightly caramelized.

Divide the dish up into small batches and freeze in an airtight container. Slow-thaw it overnight and place it in a cooking pan over medium heat whenever the craving overtakes you.

Flash freezing and other modern food technologies have wiped out homespun preservation practices for the most part. “Holing it up” can provide you with a mouthwatering, crunchy, and juicy leafy vegetable until spring. It’s a good idea to prepare your ‘burial grounds’ when fall turns to winter to enjoy the taste and reap the benefits.

How I Got A 260 Pill SHTF Antibiotic Stockpile

10 Plants You Should Never Plant Together (Video)

How To Safely Remove Poison Ivy And Hemlock From Your Backyard

How to Make Cabbage Bandages to Treat Inflammation and Joint Pain