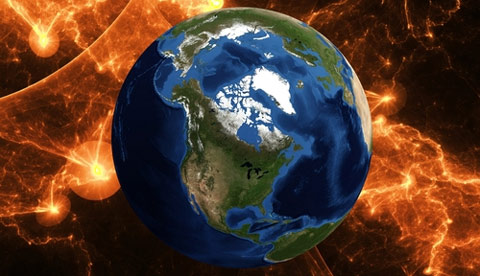 This Is a Monster: Sunspot Now Larger Than Jupiter… Continues to Unleash Solar Flares

As most Americans go about their daily lives without care or concern for what’s happening around them, 92 million miles away a catastrophic threat may well be in the making.

In January, the NOAA identified a sizable sun spot dubbed AR 1944. Within hours of warnings being issued about the potential for this particular region of the sun to cause earth-directed coronal mass ejections it sent an X-class solar flare our way. While powerful, that particular flare and the subsequent M-class flares were not strong enough to cause any significant disruptions on earth.

But as the spot rotated to the other side of the sun things got interesting… and ever more dangerous for the people of earth.

AR1944 has since been renamed to AR1967, and the region is now more active than it was in January. According to sky photographer John Chumack, AR1967 has grown considerably. It is now wider than Jupiter. That’s big. So big, in fact, that you can fitover 100 earth-sized planets into it.

Space.com calls it a monster:

“The massive sunspot AR 1967 is now wider than the planet Jupiter and is very active,” Chumack told Space.com in an email on Feb. 4. “Yesterday no less than seven M-class solar flares have erupted from this region.”

The sunspot group AR 1967 has continued to unleash several solar flares as it makes its two-week trek across the face of the sun, as seen from Earth.

And while AR1967 is not earth-facing as of right now, it will be in a couple weeks. Last week the sunspot unleashed seven M-class flares in a single day. And though earth was spared from getting hit by a higher-level X-class flare, the potential for such an event certainly exists and is estimated to be around 50% because of the region’s high level of activity.

It doesn’t happen often that the sun unleashes a solar flare powerful enough to cause serious damage, yet in the last decade we narrowly escaped the worst-case scenariotwice.

The first instance occurred in 2003, when researchers spotted the most powerful solar flare ever recorded. That one came in at a whopping X-45 class. We got lucky that time, as the flare was not earth directed. But had it been, it could have led to widespread grid-down scenarios all over the planet as power grid infrastructures would have seen surges strong enough to destroy electrical transformers and substations.

The second incident occurred in 2012 and most people didn’t event hear about it. It wasn’t disseminated by the mainstream press until a full year later. That flare was so intense that it prompted one expert to claim the world escaped an EMP catastrophe:

‘There had been a near miss about two weeks ago, a Carrington-class coronal mass ejection crossed the orbit of the Earth and basically just missed us,’ added Peter Vincent Pry, who served on the Congressional EMP Threat Commission.

‘Basically this is a Russian roulette thing,’ he said. ‘We narrowly escape from a Carrington-class disaster.’

A Carrington-class catastrophe refers to an 1859 solar event that lead to surges across the world, which resulted in a (literal) meltdown of telegraph communications equipment.

CU-Boulder professor Daniel Baker noted that the 2012 flare was unprecedented:

And to put into perspective what would have resulted had this flare not bounced off our atmosphere, Baker followed up with an ominous assessment:

Had it hit Earth, the July 2012 event likely would have created a technological disaster by short-circuiting satellites, power grids, ground communication equipment and even threatening the health of astronauts and aircraft crews.

So close that Congressional members are coming around to the idea that we could well experience the end-of-the-world-as-we-know-it should a high level X-class flare be directed at earth.

It’s no longer just an outlier, according to Congresswoman Yvette Clarke (D-NY) who is a senior member of the House Homeland Security Committee.

The Likelihood of a severe geo-magnetic event capable of crippling our electric grid is 100%.

The reality is that one of these days, perhaps even the next time AR 1967 swings around, earth could get hit by a flare similar to what missed us in 2003 and 2012.

The fall out from such an event would be nothing short of a worldwide catastrophe, as electrical power lines, utility plants, GPS systems, telecommunications equipment (including your cell phone), cars, and anything else not hardened against an electro-magnetic pulse (EMP) is rendered instantly inoperable.

What would follow is complete pandemonium as the entire global infrastructure, especially in developed nations, completely collapses.

A security report presented to Congress predicts that such a scenario would be long-term, widespread, and result in the deaths of 90% of the population of the United States.

As retired Congressman Roscoe Bartlett has warned, our ailing grid is simply not ready for it. And no one is willing to pony up the tens of billions of dollars necessary to upgrade our domestic infrastructure.

In the grand scheme of things, the sun unleashes these powerful flares on a regular basis. It will do so again. And chances are that our planet will not be ready for it.

But this time it won’t just be telegraphs or a hydro power station in Ontario that goes down. It’s going to be a massive hit and it’s going to affect anyone on this planet who is dependent on the daily functioning of electrically powered systems.

As highlighted by Tess Pennington, a grid-down scenario is no laughing matter and something to be taken very seriously:

Consider, for a moment, how drastically your life would change without the continuous flow of energy the grid delivers. While manageable during a short-term disaster, losing access to the following critical elements of our just-in-time society would wreak havoc on the system.

How prepared are you for a scenario in which the grid is non-functioning for an extended period of time?

It wouldn’t take long for society to fall apart if it were to happen. Recent evidence suggests that within three days we’d be in a world of trouble.

With all of the variables at play we can probably all agree that the possibility on any given day is extremely low. But over a timeline of fifty or a hundred years, it becomes a lot more likely.

The last time a major solar event struck earth was 1859.

Are we due for another one?