Nailing down the most dangerous zones within the U.S. can be kind of tricky. Typically one has a pretty standard set of criteria one can use to say: “This place is more dangerous than that place.” And, yes, we do have that criteria still today.

The catch is that the FBI doesn’t release their full statistics on the state of crime in America until ten months after the calendar year has ended. As of this writing, there are two more months to go until the completed data will be released for 2020. That means the current complete data set we have on crime is for 2019.

As you’ve probably already concluded, 2020 has likely changed the rankings. It was throughout that year of chaos when we saw massive rioting and looting on a wide scale.

Related: 6 Traps to Place on Your Property Against Looting Rioters

However, let’s see if we can still determine the most dangerous zones in the U.S. based on the older 2019 data and then see what we can glean from them.

A Note On The Data

Throughout this article, you’ll see mention of violent crimes and property crimes. Let’s further delineate what those are defined as. For starters, violent crimes consist of murder, manslaughter, rape, armed robbery, and aggravated assault.

Within our dataset below, property damage is burglary, larceny-theft, and motor vehicle theft. [Source]

This is the second year in a row that Detroit has earned the honor of being the most dangerous city in the United States, and due to the riots of 2020, it may very well hold its spot in the limelight for another year. [Source]

If you look at the statistics used to tabulate this list, Michigan actually has 10 cities that are within the top 100 most dangerous cities in the United States, so something very wrong is clearly going on within this state. 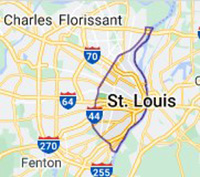 Misery loves company, and it seems to love St. Louis as well. The VCR within this city is 19.2 per 1,000 residents, and your odds of being a victim of a violent crime here are 1 in 51. [Source]

We do actually have some data from 2020 on this city, though, that isn’t too flattering.

By September of 2020, St. Louis actually fell within the top 10 cities for murders throughout the United States as well, weighing in with 185. [Source]

This will come as no surprise to anybody who’s ever been to Memphis. The city is a warzone. The VCR in this city is 19.0 per 1,000 residents, and you have a 1 in 52 chance of being a victim here. If you feel at home amid skyscrapers with razor-wire enclosures lining their parking lots, you’ll enjoy Memphis.

And while Memphis didn’t make the top 10 list for murders in 2020, you will find Tennessee within the top 10 list of dangerous states. It’s here you’ll find a rate of 3,449.1 per 100,000 being the incidence of violent crime and property crime put together.

This puts Tennessee at #6 for the most dangerous states to live in, and we do actually have some 2020 statistics at play here.

Related: The Safest Places To Live In 2021 If You Are A Prepper 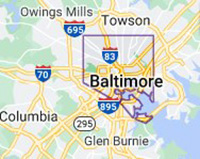 Baltimore has a well-earned reputation of being one of the most dangerous cities on the East Coast, and it’s done it again by making it to the top 10 list of most dangerous zones in America. 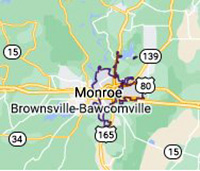 Life down in the bayou can be a bit hectic at times, and the crime statistics on Monroe, Louisiana, seem to exhibit such. Here we have a VCR of 17.9 per 1,000 people, and your chance of being a victim are 1 in 55. [Source] Keep in mind, though, that this city likely wouldn’t be on this list if we had a full workup of the crime that occurred throughout 2020 as a result of rioting and looting.

That being said, Louisiana does seem to have a relatively high rate of crime when you see that 3,815.3 per 100,000 is the incidence of violent crime and property crime there. [Source] 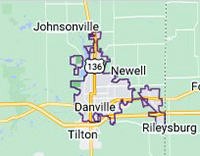 Here at the number six position of this list is a city you’ve likely never heard of: Danville, Illinois.

While the statistics for Illinois don’t categorize it within the top 10 most dangerous states, nearby Chicago is noteworthy as being the murder capital of the United States. It’s here that 524 people had been murdered by the first week of September 2020. [Source]

While there are no specific rates that cause Wilmington to stand out against the crowd of other dangerous cities (it doesn’t make the top 10 list of murders or anything like that), this is still not a city to play around in at night.

Here there’s a VCR of 15.8 per 1,000 people, and your chance of being a victim is 1 in 62. So perhaps not as flashy of a number for America’s Most Wanted as some of the other cities on this list, but it still deserves a spot on the roster.

Further Data You May Want To Take Into Consideration

While the above list takes the full gamut of crime into consideration, there are a number of other lists you may want to pay particular attention to. For example, do you know the states where the greatest numbers of missing persons (many of which are kidnappings) are?

The Areas With The Highest Number Of Kidnappings

Here are the top rankers (shown as number of unresolved missing person cases):

Other Notes On The Data

It’s interesting to note that since 2013, rape has risen roughly 20%. Keep in mind that this seems to in part come from the FBI redefining rape. Prior to 2013, the FBI viewed rape as something that could only happen to women. After 2013, the definition was redefined so that rape could happen to anybody. [Source]

Also remember that this data may be skewed by states and cities that don’t prosecute some crimes. For example, if you have a wide berth of cities throughout the U.S. that no longer consider “soft” drug use to be a crime, that won’t punish looters if it’s determined they “needed” what they just stole, or that order police officers to stand down as rioters burn a city to the ground, you won’t have anywhere near the number of arrests made as such situations justify.

As a result, there are likely to be some discrepancies within the ranking system above. There could very easily be cities that are less law-abiding or that have two standards of law for different segments of society, where Common Law is violated regularly but it’s simply not treated as an illegal act within the locale.
Nevertheless, the above statistics are likely the best we can do with the data we have at hand.

Typically within the U.S., the farther you can stay from the mega-cities, the safer you are. These seem to be the locations of the majority of violent crimes, property crimes, and murders.

As mentioned previously, the full crime data set from 2020 will likely confirm such a viewpoint as it was major cities where the majority of homes and businesses were burned down, people were dragged out of their cars and beat, and so on.

All in all, if we can boil it all down to one point, it would be this: It’s safer away from the city.

What are your thoughts on all this? Are there other variables you believe we should have analyzed? Do you think this is a pretty fair shot given the current data at hand? Let us know your thoughts in the comments below!

All Churned Up – Making Your Own Delicious Butter

Is It Legal To Go Off The Grid In Your State?