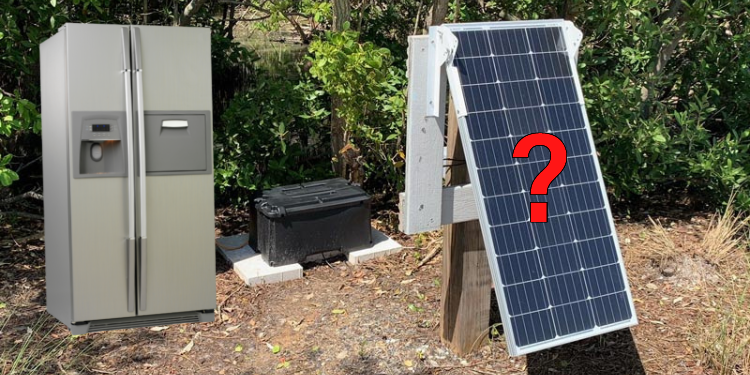 How Many Solar Panels Do You Need To Power Up Your Fridge?

If tomorrow a three-day blackout hit your area, would you know how many solar panels and what generator you need to power up your fridge until power is restored? 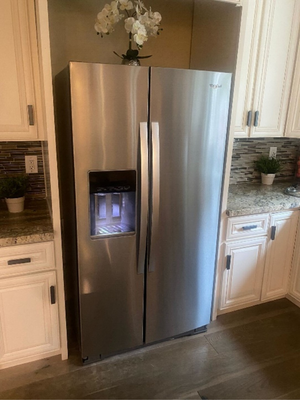 Today I hope to show you exactly what kind of solar setup you need to keep your food from spoiling during a blackout.

I’ll also show you exactly what it would take to run this rather large fridge for a three-day blackout.

The first step is to figure out how much electricity your fridge uses. The power your fridge uses is measured in watts. But to calculate the power consumption of any appliance, including a fridge, you have to multiply its wattage by the number of hours it is being used (operational hours).

They say a fridge needs to run 24/7, but that is not an accurate statement, because it cycles on and off. The U.S Department of Energy estimates that a fridge runs for about eight hours each day.

The wattage is not usually displayed on an appliance, but what you need to calculate it is.

The easiest way to do that is to look for a sticker inside your fridge that shows how many amps and volts your unit uses when running.

The formula is Amps * Volts = Watts. 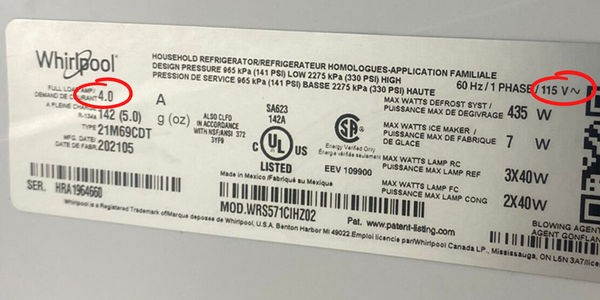 So the fridge uses 4 * 115 = 460 watts per operational hour. There is one more thing to consider: When plugging in any appliance, it will use more power for a few seconds and then go back to its normal power usage rate.

So whatever you are using to power the fridge needs to be able to deal with this surge. It is usually a 1.5x multiple of its running watts, so in this case, 460 * 1.5 = 690W. Your generator’s continuous output (and not the battery capacity) needs to be higher than 690 watts or your fridge won’t start.

A generator always has two things listed: this continuous output in watts and battery capacity in watts-hours. Both are important.

In the most simplistic view, a solar generator is basically a battery with some photovoltaic (PV) panels attached to collect the free energy provided by the sun’s rays.

Now the question you need to ask yourself is if your battery has a large enough capacity to run the fridge for the rest of the day when the solar panels are not charging it (19 hours a day) and if your solar panels can put enough power back into the battery so that it keeps a fridge (or whatever else you need) running for the entire blackout.

Keep in mind that solar panels are not 100% efficient. That means they will never capture all the energy from the sun. A 65% efficiency is what you can expect, so a 500-watt solar panel will not give you back 500 watts but only 325 watts per hour.

I made a simple table to illustrate this more clearly. In the first column, you have the hours. 10 p.m. is when the blackout started and you had to switch to solar to run the fridge. Column 2 is how much power your fridge uses every hour. Column 3 is the solar battery capacity you have available to run it; we’ll put that at 4000 WH to begin with. And columns 4, 5, and 6 are different types of solar panels that recharge that battery.

Let’s see how each of these solar panels does in our three-day blackout scenario.

First the 500-watt ones: The fridge has drained the battery down to 320 WH when the solar panels kick in and starts recharging. In five hours, they put back 1625 WH in the battery before the fridge starts discharging again. As you can see, at 9 p.m. the energy level turns negative. That means your fridge stops working until the next solar charging hours. That is 13 hours without power, so your food will most likely spoil.

Next we have the 700-watt: The same story, only they last a bit longer. They give in by 5 a.m. on the third day. Still, with the panels only a few hours away from charging, in this scenario, your food would have probably stayed good, but they will spoil on day 3.

The 1000-watt will keep the fridge going for the entire three days, and they never run the risk of not charging the battery. If you keep on with the calculations, you will find that they will power your fridge for approximately eight days, so will cover most blackouts.

But the 1200-watt panels will last virtually forever as they put in more power in those five hours than the fridge uses all day and night. This means that this system will not only outlast any blackout but even an EMP.

Now, if your battery was bigger, say 8000 WH capacity, you could go with smaller panels to outlast a three-day blackout for example. There is always a balance to be found, and hopefully, from now on, you’ll know exactly what kind of system you need to run your own fridge using solar energy during a blackout.

By the way, if you want your solar generator to run more things, like a laptop, AC, or a heater, you can also calculate their power consumption and add them to this kind of spreadsheet.

My calculations are pretty simple as I didn’t want to overcomplicate this article. But there are other things you need to consider, like the efficiency of your battery, how many times a day you open your fridge, how many defrost cycles your fridge needs over time, etc.

Running your fridge during a blackout is just one of the things you need to survive in a world without electricity. But I would like to show you 75 more projects, including how to build your own backyard solar system, harvest and store water, secure your property against looters, build your mini root cellar, and many others inside No Grid Survival Projects. Click on the link to watch the video.

⇒ Secure Your Own Physical Copy of No Grid Survival Projects!