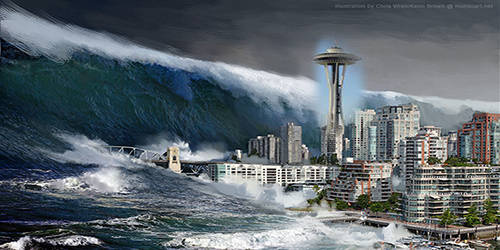 FEMA Warns That a Massive Earthquake and Tsunami Will Wipe Out The Pacific Northwest!!!

The cities of Seattle, Tacoma, Portland, parts of California, British Columbia and everything West of Interstate 5 is in extreme danger of being wiped out by a massive Tsunami that is long overdue in its coming.

A popular article in the New Yorker along with FEMA officials has brought to light that the Cascadia Fault line, which is 50-100 miles from the West coast of the Continental US and Canada, is compressing eastwards at a rate of around 1.2 – 1.6 Inches per year. The rocks of the fault line are actually quite elastic, but everything has a breaking point and when this limit is reached, the rocks will snap into place and recoil like a spring that has been stretched to the limit of elasticity.

This can generate an offshore earthquake of, on the lower limit, 8.0-8.6 and if the entire zone gives way, the earthquake will be somewhere between 8.7 and 9.2.

Imagine all of this happening under water on a global margin and thus the ‘recoil’ will be something like the seabed slamming down, surging upward into a hill and then collapsing with the force of one of the largest earthquakes in history.  The Caascade will collapse by around 6 feet and recoil to about 30-100 feet.

This will displace a gargantuan amount of water that will emanate in both directions, one towards Japan and the other towards the West coast.

A FEMA director of Region X which is responsible for Oregon, Washington, Idaho and Alaska declared:

“Our operating assumption is that everything west of Interstate 5 will be toast.”

Related: US Nuclear Target Map. Do You Live in The Death-Zone?

Why Is This Such a Concern Now?

The OSU (Oregon State University) research department have come to the conclusion that at the extreme bottom end of the fault, a section that covers that southern third of the Oregon coastline, is section that breaks more frequently and it produces earthquakes in the magnitude of 8’s about every 240 years.

Another report from the same university offers evidence that around 19 or 20 Magnitude 9.0 quakes have occurred along the Cascadia Subduction Zone fault over the last 10,000 years which means on average 1 earthquake/Tsunami every 500 years.

Just to put this into perspective, the Tsunmi that hit Japan recently was a magnitude 9.0 earthquake and the fault line was a lot further away from the coast than Cascadia to the West coast.

After analyzing the probability of this disaster, mainstream scientists and Discovery Chanel physicist Michio Kaku declared that he…

“…would think twice about living in the Pacific Northwest.” One thing is sure: Nobody will do anything about it until it happens…

…and when it happens it will be too late: the mortality rate on the northwestern coast 90%. FEMA estimates go as high as 7 million deaths.

My advice to you guys living on the northwestern coast is to get notified when an earthquake occurs before it reaches you! There are a few mobile application that serves this purpose.

After receiving the alert, sling your Bug out Bag over your shoulder, get immediately out of your home and then run for the hills!

No hills?… then the highest building that you can see.

This Bug Will Kill Most of the Americans during the Next Crisis. Must see! (Video)