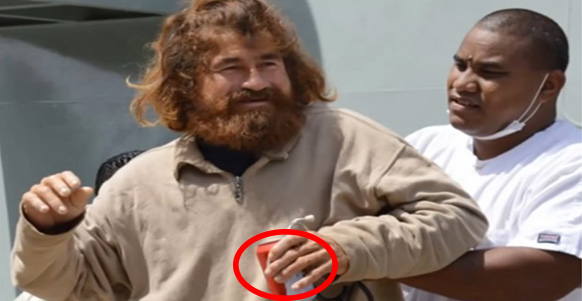 AMAZING!! – Still Alive after 13 Months Adrift in the Pacific – How did he do it?

I don’t usually drink Cola, but after 13 months adrift I’m sure it tastes goooooood.

His mother, Maria Julia, said she was eager to oblige when he returned home. Castaway José Salvador Alvarenga, who spent 13 months drifting across the Pacific, has flown out of the Marshall Islands (where he was found) to his home in El Salvador, where his mother and his 14 year old daughter were waiting for him.

Alvarenga says he stayed alive in his 24ft fibreglass boat on a diet of raw fish and bird flesh, with only turtle blood and his own urine to drink (when there was no rainwater).

He said that his crew-mate – named as 24-year-old Ezequiel Cordoba – could not stomach such foodstuffs and starved to death four months into the voyage.

Officials have said his story checks out and survival experts concede living in such conditions is theoretically possible; supporting the veracity of what could be one of history’s greatest maritime endurance feats. But not the only one: Steven Callahan survived 76 days adrift with almost no water or food reserves. He had just a spear gun and 3 solar stills. The solar stills produced enough drinking water, so Steven even declared he could’ve last almost indefinitely. (read more: The Man Who Survived 76 Days Adrift and Lived To Tell the Tale)

Before flying home he thanked his rescuers:

“Thank you for everything the people of the Marshall Islands have done for me during my stay,” the 37-year-old fisherman said through an interpreter. His trip back home was a quicker and more comfortable journey across the Pacific than the 8,000 mile sea journey which began when a fishing trip off the Mexican coast went awry in late 2012 – early 2013.

He was in and out of hospital with dehydration and a range of ailments, including back pain, swollen joints and lethargy.

Franklyn House, a retired US doctor who met Alvarenga, said he had also become increasingly withdrawn and appeared to have post-traumatic stress syndrome.

Alvarenga lived as an illegal immigrant in Mexico for more than a decade before the fateful shark-fishing trip and has expressed interest in returning to his adopted homeland.

His parents, who have hailed his survival as “a divine miracle” live in western El Salvador, near the border with Guatemala, where they care for his 14-year-old daughter Fatima. In an interview with AFP from hospital last Tuesday, Alvarenga said he had had suicidal thoughts during his trip but was sustained by dreams of reuniting with his family and eating tortilla and chicken.

“I’m so happy to know he’s alive, that he returned. I want to give him a hug,” said Emma Alvarenga, an aunt who arrived at the airport to see him but was left with the crush of more than 100 mostly foreign journalists waiting for a news conference.

Right now I’m thinking that a medium boat might be the best Bug Out Vehicle/Location. With some solar stills you basically can produce unlimited water, and you can fish all day long (with proper tools). If we face a nuclear war you can sail to Panama. If Panama collapses, you can sail to Brasilia and so on. The chances of encountering looters are far less alarming. The oceans are so vast… plenty of food… enough water to distill… you can literally last indefinitely.