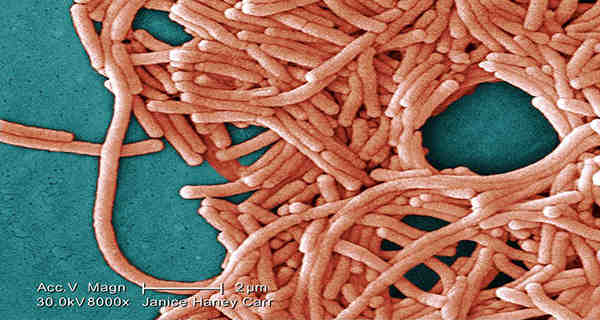 “We have 86 cases reported and sadly 7 deaths. Our hearts go out to everyone who is part of their families… If you have symptoms that might be associated with Legionnaires disease please seek treatment immediately whether thru your own private doctor or thru an emergency room like here at Lincoln. Symptoms include fever, caught and shortness of breath. 5 buildings have tested positive for legionella.” (Source)

The mayor has also outlined sanctions and regulations requiring inspectors for property owners hose buildings test positive for the disease.

The likely cause of the outbreak stated by officials are cooling towers that can release a mist that carries the legionella bacteria.  Of the 17 towers in the area, 5 he tested positive and are now all decontaminated.  Between 8000 and 18000 cases of the disease are reported each year but this outbreak was discoed in a Bronx hotel and in equipment at a hospital This is the largest outbreak of legionnaire’s disease in the city’s history and all of them have been in the south Bronx.  Many more cases are expected to be reported.

What is the disease?

People get Legionnaires’ disease when they breathe in a mist or vapor (small droplets of water in the air) containing the bacteria. One example might be from breathing in droplets sprayed from an air conditioning that has not been properly cleaned and disinfected. The bacteria are not spread from one person to another person.

You can get the disease at any age but most of the cases will be middle aged people particularly smokers or lung disease sufferers.  90 % of the cases are missed because legionnaires is rare and has similar symptoms with pneumonia.

It is treated by a large course of antibiotics that should last about 3 weeks but a delay in the treatment will mean higher fatality rate. (related: The Only 4 Antibiotics You’ll Need when SHTF)

If you have water storage tanks or bottles:

Encrypted Inside The Holy Bible: Obama is The Last President (Video)

Is a ‘Megadrought’ Coming?