The Navy SEALs have been touted a lot in the prepping and survival community. Somehow, we’ve all gotten the idea that they are the world’s greatest survival experts, but they’re not. Oh, they’re well trained in survival techniques; that’s just part of their training. But survival, at least in the sense we talk about it, isn’t what SEALs are about. They’re about surviving a hostile environment, so that they can complete their mission. More than anything, they’re about getting it done.

That’s not to say that we can’t learn a lot from the SEALs; we can. In fact, there are some very important lessons that every SEAL must learn, in order to become a SEAL, which we should all learn as well. From what I know of SEALs, and I’ve known a number of them, they would do well in a survival situation. But it wouldn’t be because of their “survival skills”, it would be because of some things which are ingrained in every SEAL I’ve ever met or ever heard of.

SEALs are unique in all of the world’s “special” military forces. Part of that is their training. The name “SEAL” stands for “Sea, Air & Land,” indicating that they are trained to operate in all three areas. It doesn’t matter to them if they use SCUBA gear to swim in to their operating area, HALO out of an airplane or hump their packs across the hills; they’re trained to pick the best way for the specific mission.

While training is really important, there’s something else that makes SEALs much more special. It’s something that comes from deep down inside the individual. Some have it and some just don’t. Those that don’t can learn it, if they want it enough. But that wanting has to come from the inside as well.

Related: A Green Beret’s Guide to EMP: Practical Steps to Prepare for a “Lights Out” Scenario

“The Only Easy Day Was Yesterday.”

If there’s anything that sets SEALs apart from normal human beings is that they just don’t know how to quit. Every SEAL is a volunteer, and they’re given countless opportunities to quit. Those who wear the trident badge, are those who have decided not to quit, no matter how rough it gets.

The SEAL motto is “The only easy day was yesterday.”. In other words, they don’t expect it to be easy. They’ve steeled themselves to succeed, no matter how rough it gets. 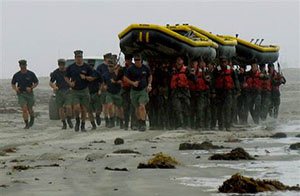 At the SEAL training camp, there’s a bell hanging right before the orderly room. During Hell Week, the fourth week of BUD/S training, the trainees are kept going, in heavy physical training, for five days and five nights continually, with only four total hours of sleep. During that time, the instructors are constantly yelling at the trainees to “ring the bell”, which signifies they quit.

When it comes to you and I, we need to have that same attitude about our survival. If there’s ever anything that can defeat us, it’s our own attitude, especially one that tells us to give up. We’ve got to learn that we can overcome and that there’s never any excuse to “ring the bell”.

But SEALs aren’t just brawn, they’re brains as well. Although the requirements for entering BDU/S training don’t actually set the bar that high, the average AFQT score for SEALS is 112, two points higher than that required to become an officer. To put that in more commonly understood terms, most successful Navy SEALs have an IQ score in the upper 120s.

It’s a good thing they’re that smart, too. SEAL teams commonly break up into smaller sub-units to accomplish their missions, sometimes units as small as two or three people. While those teams will usually have a considerable amount of support, it’s still up to the team members to plan and oversee their own missions. So SEALs have to not only be smart, but they need to be planners as well; always thinking ahead about what’s going to come, so that they can be ready when it happens.

There was a great scene in a movie, where a SEAL was confronted on the beach by a group of five gang members who thought they were pretty tough. As he sat there, listening to them threaten him and drinking his beer, he was planning out his attack. He was more ready than they were to win the battle, even though they had him outnumbered.

Situational awareness is such a part of a SEALs makeup that I really think it would be impossible to take one of them by surprise. They live a dangerous life, so they cultivate that situational awareness. Every sound, every scent and every stirring of the air around them means something, probably something that’s not to their benefit. So they stay aware, ready for whatever comes.

The other kind of situational awareness, tactical situational awareness, is about being aware about what is going on right around us. We don’t get that sort of awareness from watching the news, checking our favorite websites or even listening to a police scanner. Rather, it’s the type that comes from looking and listening to our environment. Specifically, looking for threats; the kind that come from a bad guy with a knife or a gun. The kind we have to react to RIGHT NOW!

I’ve got to end this up by going back to where I started, the training that SEALs receive. They are exquisitely trained in how to use any piece of equipment they are likely to run across, military or civilian, belonging to our own armed forces, our allies or our enemies. They can make the most of it all.

Part of the reason for Hell Week is to weed out those who are going to quit, before the Navy invests a lot in their training. With a cost of $350,000 to $500,000 to train each SEAL, and an operational cost of about $1 million per year, the Navy wants to make sure they get their money’s worth. If someone is going to quit, it’s best that they do so before investing all that effort and money in them.

Full training for a Navy SEAL can take as much as 30 months, making it one of the most intensive training regimens in any military around the world. But that training translates directly into effectiveness, as they are able to do just about anything asked of them. A Navy SEAL would probably never say “I don’t know how to do that.”. More importantly, they’d never find themselves unable to complete a mission, because they don’t know how to do what they need to. They’re well equipped, but more importantly, they’re exquisitely well trained.

When it comes to you and I, we need to have that level of training as well. Survival, especially long-term survival, requires the ability to do a broad range of different tasks, and to do them well. I don’t care how big your stockpile is or how much gear you’ve got, if you don’t know how to make the most of it, your chances of making it are extremely slim. It’s obviously time to learn some new skills.

How To Preserve Food With Duct Tape And Bentonite Clay

How To Make Neosporin; DIY Easy Tutorial With Pictures