The Three Sister Garden Plans: How To Get The Most Out Of Every Square Foot

The Three Sisters Garden plan has seen a resurgence in popularity across the country thanks to the tried and true results. The crops which comprise the trio grown together in these space saving gardens that do not require chemical fertilizers are corn, beans, and squash.

Unlike either conventional methods of gardening or modern vertical gardening designs created to maximum every inch of growing space, the Three Sisters Garden actually works with nature to enrich the soil and to create a low maintenance big yield crop.

A traditional 10 foot by 10-foot square space is used to cultivate a Three Sisters garden. But you can use this planting method to grow in just one square foot of space. The only drawback to shrinking down the growing space is the ears of corn might not grow as full and hardy as they otherwise wood.

Corn, beans, and squash have been dubbed the three sisters because the Iroquois tribe felt they were special gifts from the Great Spirit. They believed each of these staple crops were watched over by one of the three sister spirits known as the Deohako – Our Sustainers.

The tribe members believed beans, corn, and squash only thrived when grown together. Corn provides more energy or calories per acre than any other crop. Corn, beans and squash are complementary to each other nutritionally, as well. The beans are rich in protein, the corn high in carbohydrates, and the squash boasts a substantial amount of vitamins and seed oil. 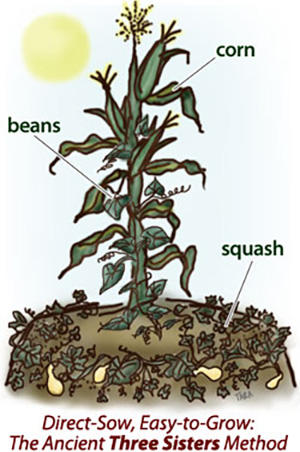 Native Americans used the Three Sisters Garden plan to foster bountiful harvests in a small amount of space without depleting the soil of the nutrients the crops need to survive.

This particular combination of crops will supply the body with nearly all eight essential amino acids, complex carbohydrates, and fatty acids it needs to maintain strength and survive. During a long-term survival situation, if all your other crops fail and hunting becomes scarce, the Three Sisters garden plan might just save your life.

Some Native American tribes introduce a “fourth sister” into this growing group. Depending upon the tribe, the fourth sister was either bee balm herb or sunflowers.

Either the herb or the flower were used to court not just bees to the garden for pollination, but “squash” or “gourd” bees which were thought to pollinate than any other variety of bee. These highly regarded pollinators are of the Eucerini; Peponapis and Xenoglossa varieties.

Long before massive farming equipment was invented, people still grew and harvested corn – and enough other crops to feed themselves without going to a store or trading. In fact, our forefathers and mothers gardened without even the aid of hardy metal tools and manufactured irrigation systems.

The Three Sisters Garden plan allows you to grow the same way. Not because you have to, but due to the time and space saving benefits, you should want to. This gardening style will provide you with all of the basic and balanced dietary nutritional staples.

Related: How to Adjust the pH in Soil and Water for Abundant Harvests

How To Grow The Three Sisters In One Square Foot

This gardening style is also often referred to as stacking in space and time. That phrasing truly embodies the basics and most important facets of the Three Sisters plan. It allows you to use the minimum amount of ground area and prep time to garner maximum results.

#1. Plant the corn, beans, and squash seeds in the spring as soon as the evening temperatures are in the 50 degrees range.

#2. For best results choose either runner beans or pole beans to plant with the corn in the Three Sisters garden.

#3. Use squash and/or pumpkin seed varieties that grow with cascading vines instead of as a more compact bush, are highly recommended.

#4. Select a gardening spot that garners full and direct sun at least six but preferably eight to 10, hours a day.

#5. If you are attempting to grow a Three Sisters garden in sandy soil, for best results you should grow not in a mound shape but in a slight well shape. The well shape will prohibit water from running off far too rapidly.

#7. When planting in a traditional raised bed, some gardeners skip the mound formation altogether because the seeds are being placed in such close quarters and already have a wood boundary around them. If you skip the mound, plant the Three Sisters in a staggered method. The corn goes in back, in a staggered not a straight row. The beans are planted in a straight row in front of the corn. Plant three sets of squash seeds in the front row. One set should be placed evenly in front of the first corn and bean seeds, another in the middle of the two established rows, and another adjacent to the end of the rows of corn and beans. 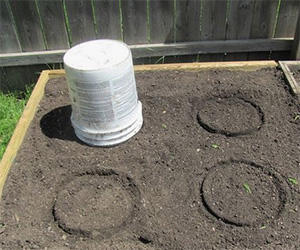 #1. You do not need to place the Three Sisters garden inside a raised bed style growing plot. But, doing so is recommended for proper positioning and contained growing, whether you choose to make mounds, or not.

#2. You will be essentially making a volcano shape with the dirt. I use a 5-gallon bucket to make an indentation in the soil to form the proper diameter for the mound and build up each growing spot, from there. The diameter for the corn, beans, and squash growing mound should be at last 10 inches wide, but preferably 24 inches wide.

#3. Make a mound using quality compost that is a minimum of 12 inches deep. The top five to six inches of the mound is where the seeds will be planted. The soil in this portion of the mound must be nutrient rich and possess the recommended pH balance for the corn, beans, and squash seeds.

#4. Plant four to six corn seeds in the center of the volcano shaped mound. I recommend soaking the corn seeds in water overnight before planting. The soaking process will cause the corn seeds to swell and enhance the germination process. Water the corn seeds immediately after planting, but be careful not to overload the swollen seeds with moisture or they will mildew.

#5. Wait at least seven days, but preferably 14 days, before adding either squash or bean seeds into the mound. This will allow the corn seeds to sprout and grow about five inches tall.

#6. Plant six beans seeds around the mound. They must be planted in the middle area of the mound and away from the spot the corn seeds were placed. Water the seeds immediately after planting.

#7. Next, plant up to three squash seeds on the outer edge of the mound, past where the bean seeds are being cultivated. Squash plants have very large leaves, do not exceed the three seeds guideline or the vine ground crop will not get enough sun and die. Water the seeds immediately after planting.

#8. Once all of the seeds begin to sprout you may need to weed out any weak producers so they do not suck up nutrients from the soil needlessly. Weak seedlings will likely produce either a diminished crop or one at all.

Once all three sisters are planted in the mound, you will need to water them via the volcano crater style top and not directly onto the leaves of growing plants. When squash leaves are over watered a fungal disease usually develops and then spreads to the rest of the one square foot garden.

Expect the beans to start naturally climbing the corn talks as soon as they grow tall enough to reach them. You can also help train the vines to gently wind around the corn stalks. The vines should then continue to wrap around the stalks like a swirl, as they grow taller. 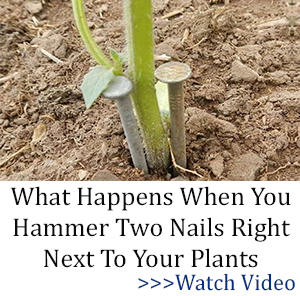