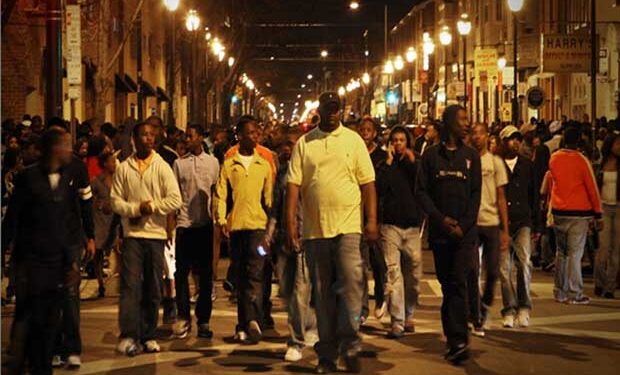 How to Survive the Knockout Game

The news is buzzing recently of the “knockout game”. This is the latest dangerous fad for stupid people to get their kicks at the expense of others. The goal of this “game” is to hit someone so hard you knock them out. Drudge Report has several headlines on his site; the latest is of three knockout cases in Philadelphia. The MO seems to be in most cases to sucker punch someone when they aren’t suspecting it. The victims do not appear to be robbed of anything in most cases, just injured physically although some have died.

I could get into a rant about society and the ills that we have brought upon ourselves but there is not much point. Society is what it is and each of us have to live in the society we have created. Like all other things in life, you have to be proactive in order to defend yourself and this latest devolutionary step is just the next thing you need to watch out for. As preppers we try to foresee events that could disrupt our lives and take steps to mitigate this risk. The risk of being assaulted by a group of thugs is no less dangerous in my opinion than a flood, hurricane or invasion by aliens. If you die, you die regardless of the reason.

The victims all seem to have been taken off guard so I want to talk about some simple steps we can all take that might help you survive the knockout game if you are the unlucky victim some idiot punk chooses.

OK, so this sounds easier than it is but this is one common denominator in these cases. The other is that usually this crime is committed by young black men. I am sure that will change though and you could just as easily be attacked by white kids or women. Next old men will get in on the action probably and then clowns and people in wheelchairs. It doesn’t matter who the person is that is committing the crime, you have to be aware of people surrounding you. In the cases I have seen like this one below, the victim, James Addlespurger is walking along minding his own business when he is approached by people in a group walking towards him. To me this looks like an alley and there are a few other people walking there also, but when the man is attacked he is pretty much alone.

Could you have seen this coming? Maybe this man was preoccupied? Maybe he didn’t fear the group of teens and that’s all good and well but he might have seen this punch coming if he had been paying attention.

I’ll stop right here and admit that I wasn’t there. Anything I say from here on out is going to sound like armchair quarterbacking and that is true. I could just as easily been the victim here but that doesn’t mean we can’t learn lessons from these acts of violence and take steps to prevent them. Just because I wasn’t there, it doesn’t mean that what I am saying is completely invalid.

OK, so back to this guy in the video above. What could he have done differently? From this video, the only thing that stands out, aside from living in another town, is that he could have scrutinized the group closely to watch the guy moving toward him. I know the punch was fast and I don’t even know if he could have evaded it completely, but if he had even a sense that he was about to be punched he could have moved, ducked or braced for impact. As it was he was knocked out by the force of the punch and landed in a heap on the ground. The impact of the ground alone probably did more damage than the punch. Contrary to what you see on MMA and WWE (yes, I know that MMA is fake) the average person isn’t really in shape to take a hard blow to our heads. This is a major concussion and if you are caught completely unaware, the effects are more instantaneous. We aren’t boxers so round after round of right hooks isn’t the norm. Our bodies aren’t ready for that type of impact so when it does, we get knocked out.

Situational awareness I think more than anything can prevent you from getting in situations like this in the first place. Where are you walking? Who is around you? Do you need to worry about the two teenagers walking your way? Maybe you need to turn around and not walk right past the big group of kids in the semi-empty alley. Maybe you are talking on your phone, or walking and texting (my personal favorite). What are you doing that prevents you from focusing on your surroundings, identifying potential threats and acting in a way that puts you in a position to react to the threat.

Anytime you are walking out in the city you need to know what is going on around you. Are you walking near a group of teens who look up to no good? If so, don’t look away trying not to draw their attention. Look them in the eyes. Let them know you see them. Act like you are ticked off and be ready to move, run duck or block any attack. The key is to not let someone sucker punch you. If they just stomp up and start swinging that is something else, but at least you would have foreknowledge of their approach. Blindly walking down the street when we have something like this gaining popularity in a society that more frequently rejects decency and good is a sure way to be a victim.

Be ready to use force

In addition to being aware of eminent threats approaching you, the next component for surviving the knock out game is that you need to be prepared to use force to defend yourself. Even if that force is only covering your head and body to diffuse some of the blows, it could mean the difference in an attack or your death. You don’t have to fight back to win this confrontation only survive. Right now, the trend seems to be that these thugs are just enjoying the thrill of knocking someone out in front of God and everyone. I expect this will change though and this “game” may just be the opening salvos of the all out war that could erupt in our major cities. This to me is similar to looting. When people don’t fear any retribution and they go and commit crimes like this with greater frequency it is alarming. If this continues, people won’t just knock you out. They might just start walking around killing people. Get enough of that happening and you have anarchy.

Some of the youths doing this are trying to use tazers. As if getting tazed from the police wasn’t bad enough, now we have to worry about kids walking up and shooting us with a tazer for fun. In one case a young boy, Marvell Weaver tried to taze someone, it backfired on him in a big way. WND describes the scene

This version of the game had a twist: Instead of punching the victim in the face, the predator used a taser – a KL-800 Type Stun Gun capable of generating 1.8 million volts.

The assailants had scouted the site, the victim and even practiced firing the taser. But then it all went wrong. Or right.

When Marvell Weaver jammed the taser into the ribs of the still unidentified man and pulled the trigger, it jammed. The target pulled out his .40 caliber Smith and Wesson and shot Weaver as he tried to escape to the getaway van where two of his accomplices waited.

Having a concealed weapon is something I recommend every law abiding citizen do where it is legal to do so. If someone is coming up to attack you, and you are aware enough to react quickly you could save yourself from getting killed.

Do not be afraid

Lastly, this behavior shouldn’t make you scared. It should piss you off! How sad it is that our country, our society has sunk this low. Rather than dwell on that like I said at the beginning you have to be ready to deal with threats like this. I for one believe that we aren’t going to have a more peaceful society for a long time. Events like this will become more common, the effects will be more serious until there is out an out violence being committed daily everywhere you go. Right now, this seems confined to big cities, but left unchecked this behavior will spread. Just because you live in a small town in Iowa, that doesn’t mean you can’t be attacked. That is all this is.

You have to be aware of your surroundings and mentally and physically prepared to act. I didn’t say karate chop someone because we all have different levels of ability, strength and fitness, but don’t give this trash an easy way to pop you in the head. Don’t be that guy on the phone texting his girlfriend when a gang of thugs is walking down the street toward you. Keep your phone in your pocket, hands free and scan your surroundings. What you see may save your life.