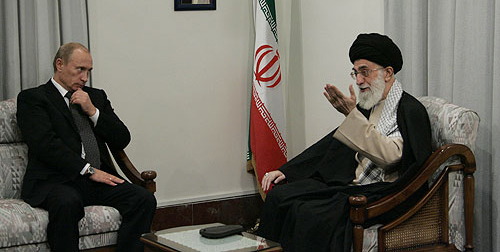 This year Forbes preferred Vladimir Putin over Obama as the most powerful man in the world. Putin has cemented his authority over Russia and anyone watching the chess match over Syria and Ukraine has a clear understanding of the shift in the power towards Putin on the global stage. (Forbes)

It is clear now that Putin’s position on ISIS will surely influence the war in the Middle East. We already know that Russia opposed bombing ISIS in Syria. (U.N. Security Council Report) But recently Putin has gathered the Russian Security Council and discussed potentially contributing to fighting ISIS according to Russian news agencies. We don’t know exactly the outcome of this meeting, but according to a Kremlin spokesman:

Putin and the Council

“exchanged opinions on possible forms of cooperation with other partners on a plan to counter Islamic State in the framework of international law”.

If you think about it, Putin has strong reasons to hate ISIS as much as we do.

First because ISIS threatens the regime of Bashar al-Assad in Syria, and second because recently ISIS has threatened to ‘liberate’ Chechnya and Muslims from Russia’s North Caucasus region, who have been waging their own insurgency. More so, an ISIS leader threatened Putin directly that his “throne is in danger and will collapse”. (Source)

Russia is no stranger to Muslim terrorists. Let’s not forget the Moscow theater attack when Muslim extremists from Russian province of Chechnya took more than 800 Russians hostages which resulted in 170 deaths.

According to BBC, “the next weapon in the fight against Islamic extremists in the Middle East might be Vladimir Putin”.

It may be that the only reason the Russians haven’t joined the Anti-ISIS Coalition is simply because they weren’t invited. Ilya Rogachev – an official in Russia’s Foreign Ministry – has just stated that

“…the anti-ISIL coalition is not a club party — we do not expect any invitations and we are not going to buy entry tickets”.

What Obama and Putin are planning?

What Obama and most of the world failed to understand is that some of the groups they armed and want to train in Syria have links to ISIS.

It appears that Obama has finally recognized the message that Putin has been sending him these past three years, that running a regime-change war with the help of extreme militias only creates enemies for Russia and America. Obama recently authorized middlemen in Moscow to initiate talks with representatives of the Russian government to find a way to strike ISIS in Syria on the ground – a way that would be convenient for both sides. (Source) According to a Moscow source, who has spoken before to American Free Press, Putin has calculated the destruction of ISIS in Syria could be swiftly ceased if Obama honors their agreement and allows the Pentagon to coordinate a bombing campaign with Russian and Syrian military assets on the ground.

Is it just a coincidence that in the last two weeks Vladimir Putin met with his potential allies in the Middle-East: Hassan Rouhani (President of Iran), Gurbanguly Berdimuhamedov (President of Turkmenistan), Ilham Aliyev (President of Azerbaijan), Nursultan Nazarbayev (President of Kazakhstan), and with King Abdullah II of Jordan? (Kremlin)

Only 50 miles away from the border with Iran, ISIS threatens the 8th military power in the world and a close Russian friend, Iran. (Source) Feeling that his “throne” might be compromised by expanding IS, the “anti-American” Iranian President, Hassan Rouhani, wants to renew the relations with USA, denouncing ISIS for its savagery, and declaring that Iran will give Iraq any support it requests for combating ISIS:

“… close relationship between the two nations can resolve many problems. A closer contact and relationship would also be beneficial for the American state person, and they can open new ways for the American politicians. We have to look at future more than the past” – President of Iran, Hassan Rouhani (Source)

But like most of us, President Hassan Rouhani questioned President Obama’s decision to go after ISIS with airstrikes only:

“If they want to use planes and if they want to use unmanned planes so that nobody is injured from the Americans, is it really possible to fight terrorism without any hardship, without any sacrifice? Is it possible to reach a big goal without that? In all regional and international issues, the victorious one is the one who is ready to do sacrifice… Maybe it is necessary for airstrikes in some conditions and some circumstances” – President of Iran, Hassan Rouhani (Source)

Starting September 23rd the Allies have been bombing ISIS in both Syria and Iraq. Five Middle East allies (Bahrain, Saudi Arabia, Jordan, Qatar and the United Arab Emirates) joined in the operation, according to the Department of Defense. Although important targets were destroyed, ISIS is not backing down. In fact, more and more recruits are joining ISIS. Basically only 400 ISIS fighters were killed in the bombardments so far. (Source)

In order to really confront ISIS, we might have to put our boots on the ground. Over 1,600 American military advisers have been recently deployed to Iraq to help the Iraqis fight ISIS. Furthermore, General Martin Dempsey has already stated that American army on the ground is a very real possibility. (Source)

But the war in Iraq cost us 4,486 American soldier’ lives. What American politicians fear most is raising that number. But by doing nothing now… won’t we raise the death toll to maybe millions later? Back to our homeland: The Texas Department of Public Safety believes they have found evidence that ISIS plans to orchestrate an attack on our power grid, and it has been speculated that ISIS might not even mount the attack itself, but could instead pay one of the Mexican drug cartel gangs to carry out the attack on their behalf. Dr. Peter Pry, head of the Task Force on National and Homeland Security, said that a gang has experience in destroying grid infrastructure in Mexico and could readily blackout USA for an extended period. His gloomy predictions were supported by Frank Gaffney, founder and President of the Center for Security Policy in Washington. At a joint press conference with Pry, Gaffney quoted sources as suggesting that a twelve month power outage would see 90% of the US population wiped out. (Source)

Basically what they are afraid of is a powerful EMP bomb (electromagnetic pulse).

Recently, a vehicle carrying radioactive Iridium-192 (a material from which an EMP bomb can be made) has been hijacked in Mexico. (Source) Could this be related to ISIS threats on America?

Dr. William Graham – the Chairman of EMP Commission, former NASA Administrator, science advisor to the President, member of the Defense Science Board and Air Force officer with degrees in physics and electrical engineering – knows what he is talking about, and his comments are not to be taken lightly:

“…there have been an enormous increase in our dependency on electronics, computers, and microelectronics… the more vulnerable the U.S. is to such an attack, the more likely it is to be used against us. In the former days, we worried about Russia… the missiles could be launched from a not-so-elaborate container ship. The rocket doesn’t have to be accurate. It just has to go up. It’s well within the capability of even an earlier Scud missile, of which thousands have been produced” – Dr. William Graham (Source)

Just two months ago ISIS paraded what they claimed was a captured Scud missile in Syria.

I have something you need to watch. It’s much better than I am at explaining the threat. Watch it and learn exactly what an EMP effects and how you can protect your electronics, car, mobile phones, etc.