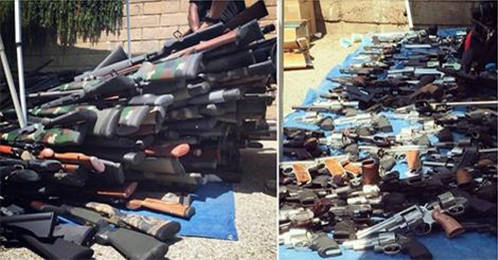 Supposed CIA Operative Caught With 1200 Guns and 2 Tons of Ammunition. What Was He Prepping For?

An amazing discovery of an average man in an upscale neighborhood in The Pacific Palisades… has left his neighbors in shock and police searching for answers.

The unnamed man’s body was found decomposing in an SUV for two weeks in Southern Californian heat and the police quickly deduced that the man had lived on the same street.

In his townhouse, he was in possession of reportedly 1200 semi-automatic guns, handguns and rifles and an estimated two tons of ammunition that took the police two days to remove with many truckloads from the home.  These are enough guns and ammunition to supply a wide range of underground activities like a terrorist group or a drug cartel.

The man was known to many neighbors only as “Bob”, but again the man’s identity is being withheld by L.A.P.D. officials (WHY ???), was by all accounts a gun enthusiast and claimed to be working and have worked covertly for the CIA.

According to his fiancee he had told her that he was an underscore operative and that he was being watched by an unnamed agency that he worked for.

Harlan Braun who is a high profile criminal defense attorney said that the story told by the fiancee “Sounds so bizarre…The problem is that the truth may be unbelievable.”

This sounds just about correct in that how the body was not noticed decomposing for two weeks in stationary SUV?  Why on earth was there so much ammunition?

I must admit I’m a little jealous of his stocks… but I don’t think he was prepping!

And most importantly why is the identity of the man being withheld?  Where do all of these questions point towards?

In 1988, while running for president, Ron Paul, then a Libertarian Party candidate, gave credence to another conspiracy theory that the CIA was involved in trafficking drugs as part of the IRAN-Contra debacle.

Drug trafficking is “gold mine for people who want to raise money in the underground government in order to finance projects that they can’t get legitimately.  It is very clear that the CIA has been very much involved with drug dealings,” Paul said.  “The CIA was very much involved in the Iran-Contra scandals.  I’m not making u the stories; we saw it on television.  They were hauling down weapons and drugs back.  And the CIA and government officials were closing their eyes, fighting a war that was technically illegal.” (Ron Paul – Source)

Sgt. David Craig of the LAPDs gang and narcotics division states that,

“We don’t think the weapons are illegal.  We are taking them for public safety.”  (Source) So the weapons were removed from the premises to ensure that they were not stolen from the home.  The dead man who was known to his neighbour as Bob Smith was never questioned about his identity and the homeowner group, said that he (also) never had a reason to question whether or not that this was his real name or an alias.

Certainly there are mysterious surroundings with this story and to add to the mystery, “Bob Smith” was personable, yet private according to David Dwyer, president of the Palisades Homeowner Assn. #4 and in addition his fiancee, Catherine Nebron failed to report his death immediately to the proper authorities due to the fact of his mysterious past.

As yet the cause of death has either not been determined or released.  All of which add to an interesting mosaic for an obvious set of crimes.

A neighbor declared for the local L.A. BBC  that he was a CIA operative working for the vice president of the United States (Joe Biden).

Remember the “Operation Fast and Furious” back in 2011? When the CIA was involved in sending weapons to Mexican drug cartels while simultaneously working with other agencies allowing narcotics to be shipped over the border?

Citing an unnamed CIA source, a Washington Times article theorizes that U.S. officials were actively aiding organizations such as the Sinaloa cartel with guns and immunity in an effort to stymie Los Zetas. That’s because, according to the piece, the powerful and brutal criminal Zetas syndicate has the potential to overthrow the government of Mexico — and might be planning to do so.

Here’s How This Can Backfire on Americans:

A former CIA officer, now a security consultant who regularly appears on Fox News, declared that ISIS and Mexican drug cartels communicate with each other.

“We’ve had good intel over the years about al Qaeda, about their efforts to coordinate with, as an example, Mexican cartels…in an effort to try to exploit our southern border” he reported, adding that a terrorist group like ISIS “absolutely” knows about the lack of security on the border. (Source)

He also stated he believes there is “a lot of communication” between ISIS and drug cartels. And that…

“the cartels are a business … if there’s a revenue stream they can exploit, then they will, and the extremists understand that.” (Source)

Our government seem to have forgotten 9/11 and doesn’t seem to understand the concept of Nuclear Terrorism. While nuclear terrorism is just a concept, that doesn’t mean that there aren’t people thinking about it. Guys, this is why we need to keep our southern border under control.

Some experts even believe that we won’t even be able to retaliate against a terrorist nuclear attack. And for a good reason! I have something you need to watch. It’s much better than I am at explaining the threat. Watch it and learn what you should fear most, and how you can protect your family in case this happens!